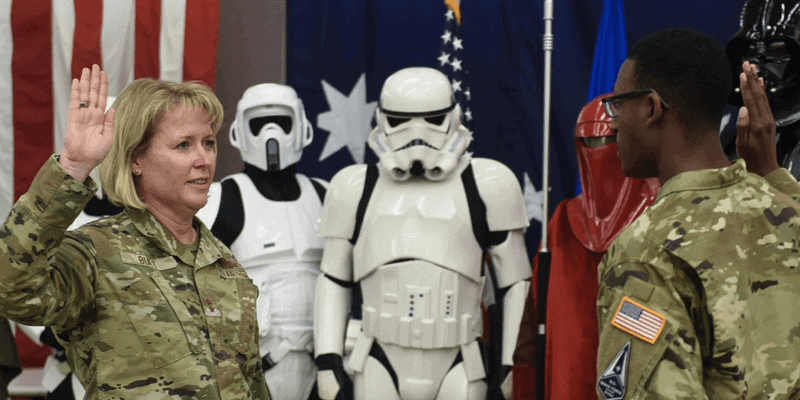 The recently-created U.S. Space Force has already been linked to the Star Wars franchise on multiple occasions in its short tenure. From considering names like Wookiees and Skywalkers for its members — they eventually settled on Guardians (yes, like those Guardians) — to getting called out by Star Wars icon Mark Hamill and Guardians of the Galaxy director James Gunn, the Space Force hasn’t had the easiest road.

Related: Real-Life Version of ‘Star Wars’ BB-8 Is Blasting Off to the Moon

Now, it seems like the Space Force might not even be sure who the good guys are in a galaxy far, far away. At a recent swearing-in ceremony for a brand new U.S. Space Force Guardian, Major General DeAnna Burt, Imperial stormtroopers, Boba Fett, and Darth Vader himself were present for the festivities.

If Star Wars cosplayers were going to be present for a United States military event, it would seem more likely, perhaps, to be characters dressed as Jedi Knight Luke Skywalker, Princess General Leia Organa, or even Millennium Falcon pilot Han Solo and his co-pilot Chewbacca.

Nonetheless, a Space Force spokesman Mike Pierson shared that the Star Wars characters were not technically on-hand for the swearing-in, but that their event coincided with the Major General’s ceremony. Per a report about the unintentionally amusing situation:

“The short ceremony where Maj. Gen. Burt was sworn into the Space Force was added to the end of the Space Day celebration,” Pierson said. “The costumed volunteers were not part of the swearing-in ceremony.”

Still, it’s not every day that Boba Fett and Darth Vader end up in an official Defense Department photo showing a general officer joining the military branch in charge of space.

Hilariously, the same article featured a statement from Pentagon spokesman John Kirby, who clarified that the United States is, seemingly, on the side of Bail Organa’s Rebellion. In part, the interview reads:

Q: Thank you. An Air Force two-star general was sworn in to the Space Force with Imperial Stormtroopers at the ceremony. Does the Defense Department endorse the values of the Intergalactic Empire?

Q: Well, I mean, is the Empire really the right image you want to go with the Space Force?

KIRBY: Ah, Jeff: We support and defend the Constitution against all enemies foreign and domestic.

So, morally the Defense Department appears to be on the side of the Rebel Alliance.

In reality, it appears that these costumed Star Wars fans were members of the local 501st Legion – Vader’s Fist. This organization has thousands of members who often don Imperial garb for special events and charity work.

They also have some very famous honorary members. For instance, actress Katee Sackhoff, who has played Bo-Katan Kryze in live-action in Jon Favreau and Dave Filoni’s The Mandalorian, and in animated series Star Wars: The Clone Wars and Star Wars Rebels, received honorary membership into the 501st.

The official website of the U.S. Space Force describes this newest branch of the military as:

The U.S. Space Force (USSF) is the newest branch of the Armed Forces, established December 20, 2019 with enactment of the Fiscal Year 2020 National Defense Authorization Act. The USSF was established within the Department of the Air Force, meaning the Secretary of the Air Force has overall responsibility for the USSF, under the guidance and direction of the Secretary of Defense. Additionally, a four-star general known as the Chief of Space Operations (CSO) serves as the senior military member of the USSF and is a member of the Joint Chiefs of Staff.

What do you think about the Pentagon getting involved with this unintentionally amusing Space Force and Star Wars situation?