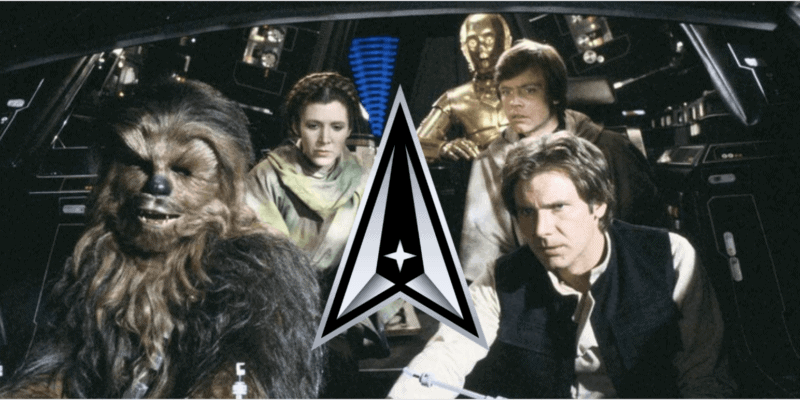 When the Trump administration White House and the newly formed United States Space Force (USSF) announced that its Space Force officers and members would be called “Guardians” in December, it immediately caused a ruckus on social media.

Leading the charge were Star Wars actor Mark Hamill (Luke Skywalker) and Marvel Studios’ Guardians of the Galaxy director James Gunn. The duo bantered on Twitter, with Gunn posting, “Can we sue this dork?”

Gunn was referencing the fact that the name “Guardians” seems to be a direct reference to his movies featuring Peter Quill/Star-Lord (Chris Pratt), Gamora (Zoe Saldana), Rocket Raccoon (Bradley Cooper), and the rest of the Guardians gang.

Hamill wasted no time replying with the following post. He even pointed out that the Space Force flag strongly resembles the logo for another popular sci-fi series:

So they grab the “Guardians” from your movies, they use the “Force” from our movies… then they have the gall to just steal their logo from “Star Trek”? Let’s file a 3-way joint lawsuit & really nail these larcenous bastards! #MayTheDorksBeWithYou

Now, it has emerged that “Guardians” wasn’t the only fandom-related name the United States government considered for Space Force members.

Stars and Stripes recently released the full list of name suggestions for the U.S. Space Force team and if you’re a Star Wars, Star Trek, or Marvel fan, you’re sure to be amused.

Related: Journey to Ahch-To With This ‘Chewie and the Porgs’ Read-a-Long & Craft

The nature of creating a military branch that is tasked with defending the United States from threats in space comes with a number of challenges, which includes finding the name that reflects its mission while avoiding any inherent absurdity, with a new report detailing that the organization was a sent a number of suggestions for identifying its members that were lifted straight from pop culture, which included Skywalkers, Wookiees, and Trekkies.

Unfortunately for Chewbacca fans, we won’t be sending an actual team of USSF “Wookiee” members into a galaxy far, far away to search for real-life porgs. Tragic, really.

For those unfamiliar with the mission of the U.S. Space Force — a division of the United States Air Force (USAF) — the military branch’s official website reads:

The USSF is a military service that organizes, trains, and equips space forces in order to protect U.S. and allied interests in space and to provide space capabilities to the joint force. USSF responsibilities include developing Guardians, acquiring military space systems, maturing the military doctrine for space power, and organizing space forces to present to our Combatant Commands.

Which of the proposed Defense Department Space Force personnel names is your favorite?

Comments Off on The U.S. Space Force Almost Called Its Members “Wookiees”