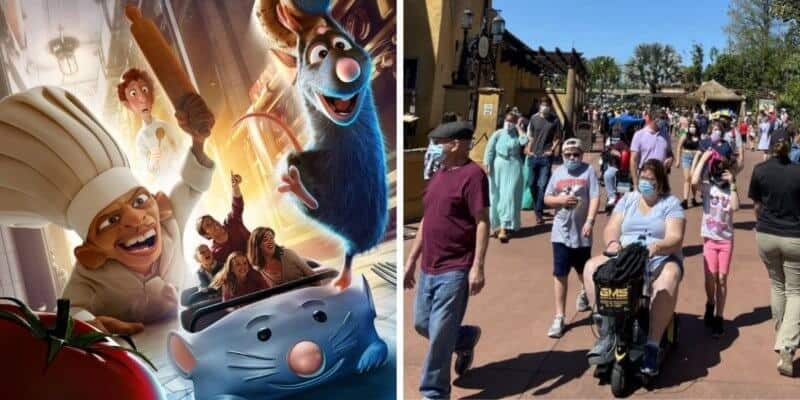 October 1, 2021, will be a historic day in Disney history. Not only will we be celebrating the 50th anniversary of Walt Disney World Resort, but we will also be celebrating the opening day of Remy’s Ratatouille Adventure, a new attraction in the France pavilion in EPCOT.

In case you aren’t aware, Disney has a new Park Pass reservation system that requires those who wish to visit a Walt Disney World theme park — Magic Kingdom, Disney’s Hollywood Studios, EPCOT, or Disney’s Animal Kingdom — to have both a valid ticket and a reservation for the park they wish to visit on that day.

We previously reported that Annual Passholders were no longer able to book a Disney Park Pass for EPCOT on October 1, but the good news was that theme park ticket holders, as well as select Resort Guests, were still able to book a Park Pass for EPCOT on October 1 to ride Remy’s Ratatouille Adventure on its opening day. However, that has since changed.

Now, when looking at the Disney Park Pass reservation calendar, as you can see in the screenshots below (taken on the day of publication, May 7, 2021), there is no availability for EPCOT on October 1, no matter what type of ticket you have.

We previously reported that Magic Kingdom was completely booked for October 1, therefore, EPCOT is now the second theme park to no longer have availability for the 50th anniversary. So, if you want to go to either EPCOT or Magic Kingdom on October 1, 2021, and you have not yet booked a theme park reservation, you will have to have a Park Hopper ticket or an Annual Pass and make a reservation for either Disney’s Hollywood Studios or Disney’s Animal Kingdom. Then, if capacity allows, you can Park Hop to either Magic Kingdom or EPCOT later that day.

Related: How to Avoid Crowds at Star Wars: Galaxy’s Edge in Hollywood Studios

It is also important to note that if you are an Annual Passholder, October 2 is completely booked for Magic Kingdom at this time.

Additionally, please keep in mind that it is possible that Disney World could add more Disney Park Pass availability, specifically if they decide to increase capacity by October 1. Although we don’t know yet when the next capacity increase will come, in a meeting earlier this year, Bob Chapek, Chief Executive Officer of The Walt Disney Company, explained that theme park capacity increases all depend on how quickly the public gets vaccinated for COVID-19. You can read more about that here.

Always make sure to check the official Disney World Park Pass availability calendar for the most up-to-date information.

There is currently another Disney attraction called Ratatouille: L’Aventure Totalement Toquée de Rémy, which opened at Walt Disney Studios at Disneyland Paris years ago. The new Disney World attraction is expected to be a close replica of the Disneyland Paris attraction.

In October 2021, we are going to be celebrating the 50th anniversary of Walt Disney World Resort! In case you aren’t familiar, on October 1, 1971, Magic Kingdom at Walt Disney World opened to the public, and ever since families around the globe have visited just to get a glimpse of Cinderella Castle.

Known as “The World’s Most Magical Celebration,” Disney World will begin its anniversary festivities on October 1, 2021, to commemorate exactly 50 years since Magic Kingdom first opened its gates in 1971. For more information on the 50th anniversary, visit our website here.

Are you excited for the debut of Remy’s Ratatouille Adventure? What about Disney World’s 50th anniversary? Let us know in the comments below.