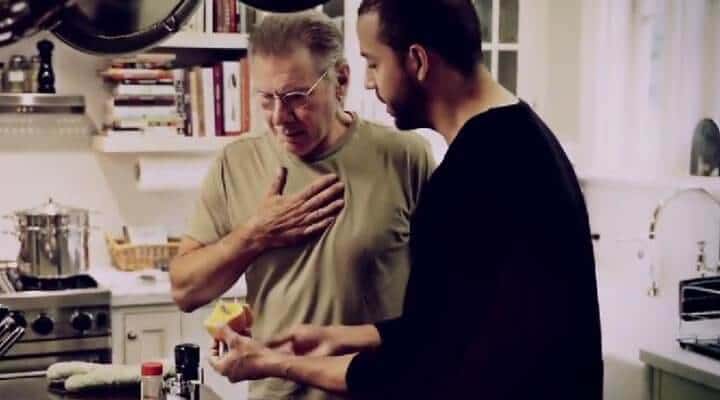 Harrison Ford has had a long Hollywood career. He has appeared in film franchises like Blade Runner — as we all know from the 2021 Academy Awards ceremony — Jack Ryan, Star Wars, and Indiana Jones.

This A-List status means that the now 78-year-old Academy Award-nominated actor has been called upon to make certain appearances in his life. One such appearance was being the celebrity guest on magician David Blaine’s David Blaine: Real Or Magic? (2013) film.

In the above video, which was originally from the 2013 magic documentary-style movie and has gone viral again following Ford’s memorable Oscars presentation, Blaine performs his impressive “think of a card” card trick, apparently in Ford’s kitchen.

The What Lies Beneath actor is shocked when his card of choice, the nine of hearts, is in an orange, of all things, from his kitchen counter after Blaine asserts the card has “left the deck”. In the background, a woman — possibly Ford’s actress wife, Calista Flockhart — can be heard saying, “No way!”

Ford’s reaction is less G-rated, so you’ll just have to watch the clip to see exactly how the amazing magic trick goes down.

Among the many who have reshared this once-again-viral video is Entertainment Tonight Canada, who wrote:

An old video of Harrison Ford reacting to one of David Blaine’s card tricks has resurfaced on TikTok. In the clip from “David Blaine: Real Or Magic?”, Ford has the best reaction to Blaine’s “think of a card” trick.

What is Harrison Ford doing now?

Ford, who is, perhaps, best known for his 40+ years portraying Millennium Falcon pilot Han Solo in the Star Wars universe, is next set to reprise another Lucasfilm role. Ford will be playing famed archaeologist, Doctor Henry Jones Jr., for the fifth time in the upcoming Indiana Jones 5.

Little is known about the plot of the movie at this time, but it will be directed by James Mangold (Walk the Line, Logan, Girl, Interrupted) — Steven Spielberg will produce this installment — and is set for a July 2022 debut. Indy 5 will also star two other Lucasfilm alums, Phoebe Waller-Bridge (Solo: A Star Wars Story) and Mads Mikkelsen (Rogue One: A Star Wars Story).

What do you think about Harrison Ford going viral again with his reaction (which is, let’s be honest, all of our reactions) to David Blaine?