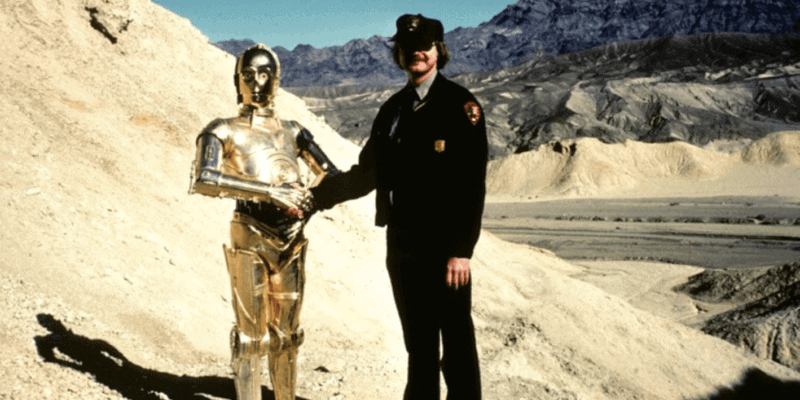 There are certain places on Earth that feel, well, otherworldly — almost as if they fell straight out of a galaxy far, far away. One of these locations is Death Valley, California’s “Star Wars canyon.”

Famous in the aviation world, even CNN has previously shared a video of the Death Valley National Park canyon, with the caption:

Known by the US military as the Jedi Transition, Death Valley’s Rainbow Canyon is aviation geeks’ “Star Wars Canyon”

If it weren’t for The Volume soundstage, Star Wars canyon looks like it could be used as a set for The Mandalorian or one of its numerous spinoffs — Ahsoka, Rangers of the New Republic, and The Book of Boba Fett.

One can almost imagine Ahsoka Tano (Rosario Dawson) — white lightsabers in tow — and Din Djarin (Pedro Pascal) trekking through the floor of this craggy canyon.

Now, Star Wars fans can pretend they, too, are X-wing fighter pilots like Jedi Knight Luke Skywalker (Mark Hamill) or Resistance ace Poe Dameron (Oscar Isaac) all thanks to a video shared by The Drive.

In this video, you can experience the Jedi Transition from the cockpit of a C-17 Globemaster airlifter — and you won’t regret it. Even though you’re not actually in the plane, this video offers an intense experience, so buckle up for a wild ride!

The Drive shared these details about the exhilarating video of the military aircraft:

…[the pilot is] approaching the canyon before diving into it in a steep left bank, then the pilot maneuvers hard, nearly on the knife-edge, inside the canyon’s snaking ravine. The video really does offer a new sense of just how ‘sporty’ Star Wars Canyon was. You can see how close the terrain was off the cargo hauler’s right side towards the end of the run. The continuous altitude and sink rate warnings are also an ominous touch. The same poster also provided a dramatic video shot from the ground along the canyon’s rim as the C-17 drops into it.

It’s worth noting that a tragic 2019 Super Hornet crash changed regulations in Star Wars canyon — there is now a 1,500-foot altitude restriction. The Drive noted that this undated video would have been shot prior to that time.

As if this video isn’t exciting enough on its own, it is also the perfect segue into the next feature-length Star Wars movie. Announced by Lucasfilm President Kathleen Kennedy during the 2020 Disney Investor Day event, Star Wars: Rogue Squadron (2023) will be directed by Patty Jenkins (Wonder Woman, Wonder Woman 1984, I Am the Night).

Few details are known about Rogue Squadron, but Jenkins — the daughter of a U.S. military fighter pilot — has teased that her screenwriter is a “he” and that the next Star Wars film will feature a new cast of characters.

There have also been unconfirmed rumors that Chris Pine is linked to the project. He has worked with Jenkins on numerous projects and has confirmed that he knows the Rogue Squadron story.

The Star Wars franchise and Death Valley actually have quite a history. George Lucas used the U.S. National Park as Tatooine while filming Star Wars: A New Hope (1977) and Star Wars: Return of the Jedi (1983).

The National Parks Service has noted that this sort of filming would not be permitted in this day and age:

Star Wars, a New Hope, was filmed in the national park a few decades ago, when that type of filming was permitted. We would not allow the vast majority of the filming that was done now because of the prohibition on commercial filming in wilderness.

What do you think about this ride through the Jedi Transition? Does it get you excited for Rogue Squadron and its Star Wars fighter jets?

Comments Off on WATCH: Take an Insane Ride Through ‘Star Wars’ Canyon