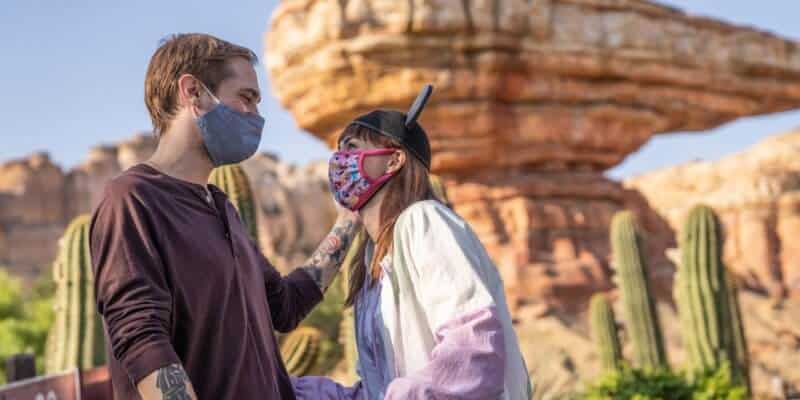 Last week, the news broke about the possibility for Disneyland to now be able to reopen very soon in the red tier of California’s reopening plan. That has made California residents so excited that they can head back to Disneyland Resort for some theme park magic sometime this spring!

The California state officials’ original guidelines included not being able to reopen large theme parks like Disneyland Resort until the yellow tier, which is the lowest tier and the most difficult to achieve. Both Anaheim and Los Angeles supported a bill to allow Disneyland and Universal to reopen sooner. And now, it has become clear that California Governor Gavin Newsom and his administration have revised the reopening guidelines so that all theme parks can reopen in the red tier, tier 2.

Each California theme park no matter the size is able to reopen as early as April 1st, as long as that county is in the red tier of California Governor Gavin Newsom’s Blueprint For a Safer Economy (thanks to the new “Blueprint Refresh”). The entire region of Southern California including Los Angeles County, Riverside County, San Diego County, and Orange County, where Disneyland Resort Anaheim resides, is currently in the purple tier. It has yet to be announced by Disney exactly when this phased reopening of the Disneyland Resort theme parks will begin, but we know news is coming soon.

It’s been just about a year since Disney closed Disneyland Park, Disney California Adventure Park, and the three on-property resort hotels (the Disneyland Hotel, Disney’s Paradise Pier Hotel, and Disney’s Grand Californian Hotel & Spa). Other Disney Parks around the world and the Downtown Disney District have since reopened, as well as Buena Vista Street at Disney California Adventure (which operated as an extension of Downtown Disney since November 19, 2020).

Buena Vista Street will soon close free access to host the limited-time event A Touch of Disney, which will reopen more DCA dining locations and bring back Disney characters. Many have speculated that the Disneyland reopening date will be after the conclusion of A Touch of Disney on April 18th. This would make sense as tickets for A Touch of Disney sold out on the ticket release date even with an added two weeks. Disney CEO Bob Chapek even confirmed that the company is eyeing a late April reopening for the Disneyland Resort theme parks.

Disney will also need to recall Cast Members back to work, train them in new health and safety measures, and put any final touches on those measures. If Disneyland Park and Disney California Adventure reopened at the end of April, it also would be right in time for Disney’s Grand Californian Hotel to reopen DVC villas in May. Again, the reopening date will be dependent on the county being able to arrive in the red tier.

Here are some of the major points of what visiting Disneyland will look like upon its earliest reopening date. (And the Disneyland official announcement is that Avengers Campus will not open with the parks reopening.)

Mandatory face coverings are a state-wide guideline. These will be enforced along with a temperature check at the security checkpoint for Disneyland. Both temperature checks and face masks (for Guest 2 and up) have been enforced at the Downtown Disney District ever since it reopened on July 9.

When Will Disneyland Be Open at Full Capacity With No Restrictions?

Now, fans of the original Disney Park can officially see the light at the end of the tunnel. It’s starting to spark the question of when Disneyland will be open at full capacity with no restrictions. There are many fans who will choose to wait until the Disney Parks are more “back to normal” before returning for a visit, whether that is because they want to wait until the pandemic is a thing of the past or they do not want to visit the theme parks with all of the current protocols in place.

Well, Walt Disney World reopened its doors in mid-July of 2020 at 25% capacity. In late 2020, Disney announced during the Q4 earnings call that it had increased Disney World’s capacity to 35%. With Disneyland moving at a slower pace than Disney World when it comes to reopening and with the tiered reopening plan in place for California, it’s more than likely we won’t see capacity increasing at the Southern California Disney theme parks until at least later this year.

In a new report by the Orange County Register, California Health and Human Services secretary Mark Ghaly and California Business and Economic Development director Dee Dee Myers weighed in on when California theme parks can possibly return to 100% capacity.

When parks return to normal remains unknown — much like many aspects of the pandemic.

“This is not for the ages,” Myers said. “This is just the next phase as we move forward.”

The revised state guidelines allow theme parks to return to 35% attendance capacity in the yellow tier — but what happens after that is fuzzy.

“We hope and expect that there will be a day where we can turn the page on the Blueprint and move towards a new, slightly different normal for a period of time when some of the restrictions of the Blueprint are not there,” Ghaly said. “We hope that summer is that target.”

Recently, Disney Parks updated its mask guidelines to include mandatory face coverings on-property even for those who are vaccinated but approved masks with clear sections. But in the Q1 earnings call, Disney CEO Bob Chapek, said that he didn’t foresee the same state of masks and social distancing at Disney Parks for 2022, based on vaccine progress and other factors amid the pandemic.

Legacy passholders are also waiting on news for when there will be an annual pass program again, which Disneyland President, Ken Potrock said they are working as fast as they can to create. More than likely, this is something that won’t be brought back until there is a more “normal” state at Disneyland again.

So, what can that mean for a full Disneyland reopening, AKA a “back to normal” state of the theme parks? Well, there isn’t a Disney official timeline as to when this will be, but the theme park will likely work closely with the state in a steady trend to get back to a full capacity with no restrictions. With all the latest news and what we’ve heard from Disney, maybe we can see Disneyland “back to normal” in late 2022 or early 2023, especially considering the rate of vaccine distributions, recommendations from the Centers for Disease Control and Prevention (CDC), local health guidelines, and consumer confidence in traveling and returning to theme parks.

It will likely take quite a while for Disneyland Resort to return to “normal” operations without any pandemic-era restrictions, but we will continue to monitor the news and share the latest information as Disneyland continues its phased reopening.

When do you foresee Disneyland being “back to normal?” Will you be visiting Disneyland before then, or will you be waiting until there are fewer restrictions? We want to hear from you in the comments below!