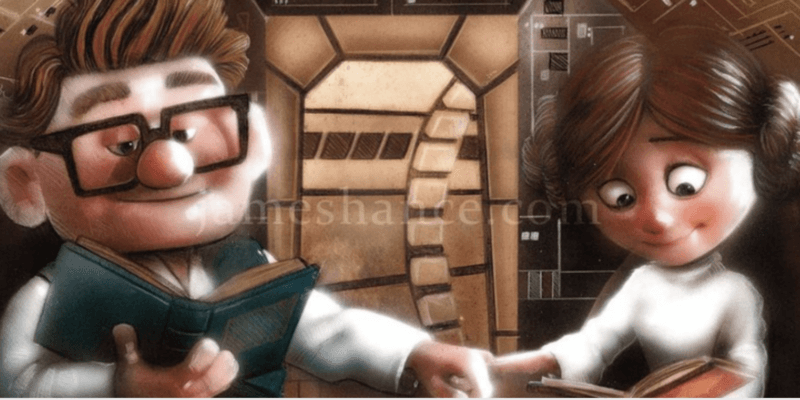 If you’ve ever wondered what Carl and Ellie from Pixar’s Up (2009) would look like if they cosplayed as Star Wars characters Han Solo (Harrison Ford) and Princess Leia Organa (Carrie Fisher), your long wait is over.

In this piece, “Galaxy Explorers,” Carl (dressed in Han’s famous striped pants and black vest) and Ellie (dressed in Leia’s white dress from Star Wars: Episode IV – A New Hope) sit side-by-side with their books, just like they love to do in Up! Except this time, they’re in the Millennium Falcon!

Another piece of Star Wars-meets-Pixar art in the collection is “Someone Who Loves You.” This piece of Disney artwork again features Carl and Ellie, but this time in their twilight years — just like Han and Leia were in the sequel trilogy during their now-famous Star Wars: Episode VII – The Force Awakens (2015) scene.

Not much has changed in this artwork, except for the couple’s ages. Their relationship is still as heartwarming as ever (in live-action Star Wars canon, too).

Now for the Star Wars art that I, personally, am not sure I can live without — Let’s look at a piece titled “Home” that showcases the beloved Up characters (again in their Star Wars iterations), as they paint their names onto their mailbox.

Instead of “Carl and Ellie,” of course, this version of the mailbox reads “Han and Leia.” And, instead of the famous Up house in the background, Han’s Corellian light freighter sits at the ready, unless the hyperdrive is broken again.

I’ll be waiting patiently for a Carl and Ellie version of the iconic Star Wars: Episode V – Empire Strikes Back kiss scene on Hoth. Which Han and Leia Star Wars saga scene would you most like to see added to this adorable collection?

If you love this Han and Leia collection, you won’t want to miss the rest of Hance’s incredible Disney artwork, most of it Star Wars-inspired!

His Winnie the Pooh series, for example, reimagines the Hundred Acre Wood gang as beloved Star Wars icons — Pooh as Chewbacca is almost too cute to handle!

There’s also plenty of Mandalorian art for fans of the hit Jon Favreau and Dave Filoni streaming series. “Like a True Nature’s Child,” for example, showcases Grogu (AKA Baby Yoda) in the speeder scene from The Mandalorian Season 2, Episode 1 (“Chapter 9: The Marshal”).

Could we see Han and Leia again in Star Wars?

As Lucasfilm continues to add new Star Wars content to the Disney+ streaming service, some Star Wars fans have wondered if Han Solo or Princess Leia could make a cameo appearance moving forward. After Skywalker showed up in The Mandalorian Season 2 finale episode (“Chapter 16: The Rescue”), it feels like anything can happen in a galaxy far, far away moving forward!

Furthermore, CGI was already used so that Leia could appear in Rogue One: A Star Wars Story (2016). The same technology could certainly be used again, particularly within The Mandalorian saga.

Showrunner Jon Favreau and Dave Filoni have shown a willingness to include original trilogy characters, as proven by Skywalker’s recent appearance.

Lucasfilm also has a Lando miniseries in the works featuring none other than Han Solo’s frenemy, Lando Calrissian (Billy Dee Williams/Donald Glover).

At this time, it seems most likely that Han would show up in either Lando or The Book of Boba Fett, perhaps at the Mos Eisley Cantina on Tatooine. As for Leia, only Favreau and Filoni know if there are plans for her in the Star Wars story moving forward.