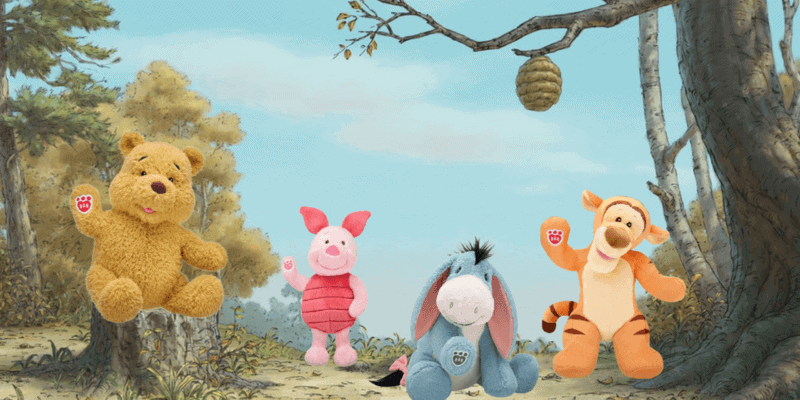 We’ve reported on the adorable Winnie the Pooh Build-a-Bear in the past, and it seems that due to the success of everyone’s favorite silly old bear, the team has released a full Winnie the Pooh collection!

Let’s take a look at all of the Hundred Acre Wood pals!

The full Winnie the Pooh package includes the bear, classic red t-shirt, hunny pot wristie, and a sound chip that includes six of Pooh’s classic sayings, including “oh bother” and “I’ve got rumbly in my tumbly.” The full bundle costs $50, and given he’s sold out several times; you might want to act quickly!

The Tigger bundle comes with a stuffed character, and the sound chip includes phrases like “Bouncing is what Tiggers do the best” and “TTFN, ta ta for now.” As Tigger doesn’t come with any additional clothing or items, the bundle is priced cheaper than Pooh at $37.

The little and loyal friend of Pooh comes fully stuffed and with a sound chip for just $30. His sayings include, “The best thing about hugs is that it’s easy to share them” and “Oh my, it’s awfully hard to be brave when you’re such a small animal.”

The last character on the list is the gloomy Eeyore, who again comes fully stuffed with a sound chip that includes some of his classic phrases. They have, “Hello, thanks for noticing me,” and “You really cheered me up.” He comes priced at $37.

These are far from being the first Disney characters to get their Build-a-Bear creations. Recently we’ve seen Stitch alongside The Child from The Mandalorian appear in the famous store’s catalogue.

Will you buy any of the ‘bears’ from the Winnie the Pooh Build-a-Bear collection? Let us know in the comments below!