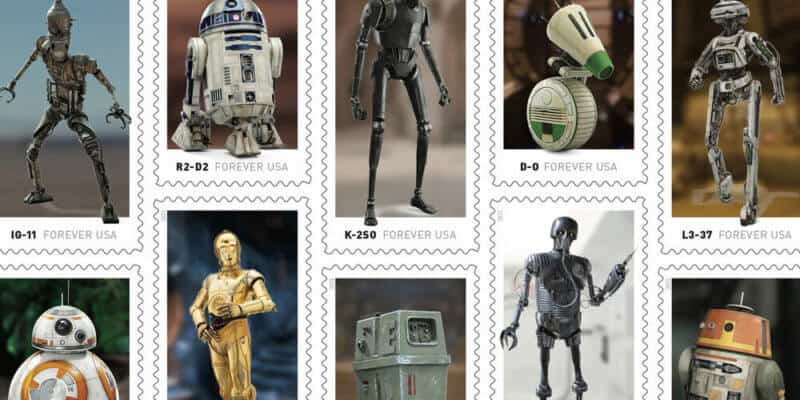 These are the droids you’re looking for! Star Wars has officially announced a brand new collaboration with the United States Postal Service and it’s sure to delight all Star Wars fans.

R2-D2 once delivered the Death Star plans to the Rebellion; soon, the plucky astromech — and nine other Star Wars droids — will help your mail reach its destination, too.

The U.S. Postal Service announced today a new series of Star Wars stamps, all devoted to our favorite galactic droids. Designed by Greg Breeding with William Gicker serving as art director, the collection will be available on a pane of 20 stamps and feature droids from both film and animation, including IG-11, R2-D2, K-2SO, D-O, L3-37, BB-8, C-3PO, a Gonk droid, 2-1B surgical droid, and Chopper. Look for these droid-tastic stamps to arrive in spring 2021 and check them out below!

The fun new postage stamp series showcases each droid’s name next to “Forever USA,” which is a cute addition. Below, we take a closer look at some of the fan-favorite Star Wars droids who are included in the upcoming Star Wars stamp series.

R2-D2’s long-time bestie — since the original trilogy era, when the duo went on adventures with Skywalker, Han Solo (Harrison Ford), and Princess Leia (Carrie Fisher) — C-3PO is also, unsurprisingly, featured in the droid stamp collection. The protocol droid and the R2 unit will next be seen together in an upcoming Disney+ animated series, A Droid Story!

Rogue One: A Star Wars Story fan-favorite droid, K-2SO, might not be appearing in Season 1 of the Andor series, but at least he’s been immortalized by United States Postal Service.

IG-11, the droid who sacrificed himself to save The Mandalorian’s Din Djarin (Pedro Pascal) and Grogu in the Season 1 finale, looks ready for action on this stamp. Taika Waititi, who voiced IG-11, is currently developing his own Star Wars movie.

Sequel trilogy droid D-O, who had a rough life before he was rescued by Rey (Daisy Ridley), Poe Dameron (Oscar Isaac), and the gang, looks cute as ever on his new stamp.

Last, but certainly not least, would it really be a droid celebration without BB-8? The most lovable BB unit in the galaxy first captured fans’ hearts in Star Wars: Episode VII – The Force Awakens and remains a fan-favorite character to this day.

The best part of these new USPS Star Wars stamps? According to Star Wars.com, they are meant to remind people of:

…the continued collaboration between Star Wars: Force for Change and global pre-K-12 nonprofit organization FIRST (For Inspiration and Recognition of Science and Technology).

Star Wars: Force for Change and FIRST have joined forces to expand access to STEM learning to more young people around the world, and to help them envision a brighter, more inclusive future.

If you’re a Star Wars fan, though, you’ll have to wait to find out the official release date for the Star Wars saga stamps featuring all of your most beloved droids. Lucasfilm and the United States Postal Service have not yet confirmed exactly when these stamps will be available in post offices nationwide.

Since the new Star Wars’ themed stamps are Forever stamps, you don’t have to worry about postage prices increasing. This means you can purchase as many Star Wars postage stamp books as you want!

Are you excited to buy your droid stamps this spring? I know I’ll be stocking up for Christmas cards later this year!