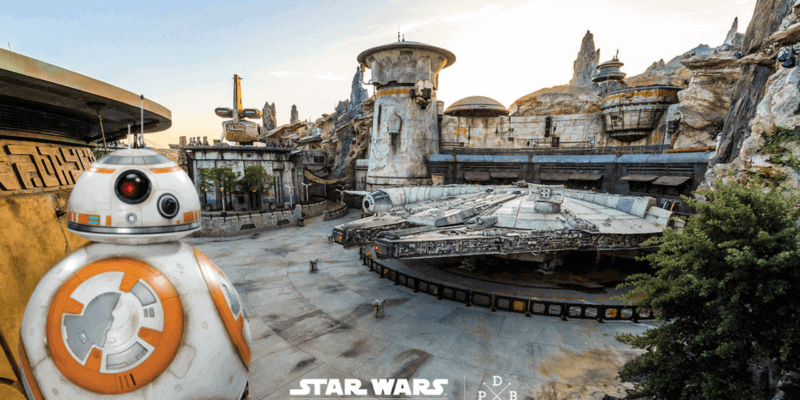 A fan over on Reddit has captured what Galaxy’s Edge in Disney’s Hollywood Studios would look like if BB-8 was roaming around the land. Check out the footage below to see how awesome it would be to see one of our favorite droids in Batuu:

While it was originally reported that BB-8 had been seen tested in Galaxy’s Edge if you look closely you can see that this is just a clever use of Augmented Reality (AR) and BB-8 isn’t actually in the land at all. The other way you can be guaranteed that this isn’t real footage, there is no huge crowd surrounding him!

Of course, on a normal day in Disney’s Hollywood Studios (one not during a pandemic) you can meet BB-8 in Star Wars Launch Bay but we’d certainly love to see the droid interacting with guests in Galaxy’s Edge. Disney did originally build droid tracks into the land which you can see dotted around Batuu but due to the popularity of the land, they have since gone unused.

Related: Oga’s Cantina at Galaxy’s Edge is a Dream Come True for a Star Wars fan

It will be interesting to see if Disney begins to allow roaming droids into the land in the years to come, once the initial excitement of Batuu has died down and the pandemic is out of the way.

If you’re looking to take a trip to a Galaxy Far Far Away soon then be sure to chat with our friends at Academy Travel. No matter what your Disney Parks needs. the team will be able to help you to book your next magical vacation. Contact their team now for a free quote!

Would you like to see BB-8, R2-D2 and the rest of the droids roaming Galaxy’s Edge? Let us know in the comments below!