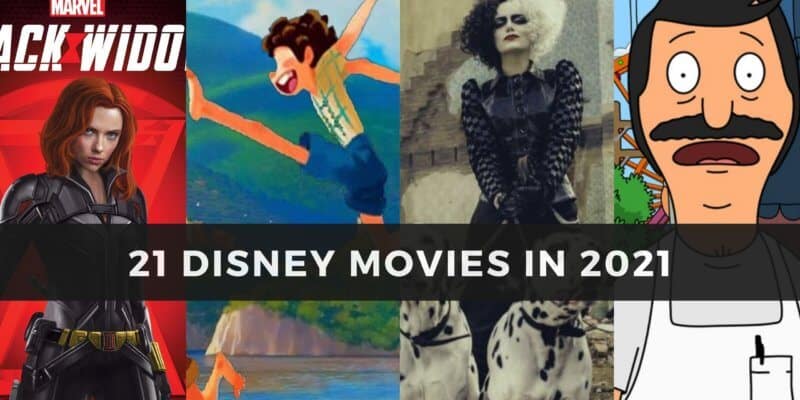 The Walt Disney Company has recently announced that they are turning their attention to their streaming platform Disney+, and with 21 movies slated for 2021, they are moving with full force towards dominating the entertainment industry.

After acquiring Fox–now called 20th Century Studios–, the Walt Disney Company opened itself up to a huge onslaught of films and intellectual property that is opening a wider audience for the franchise. Between 20th Century, new classic Disney films, Marvel movies, and films that were pushed back due to COVID-19, 2021 is looking to be a promising year for Disney’s entertainment arm or the corporation.

Thanks to Insider.com, we can take a look at a full list of Disney films headed our way in 2021 with a timeline included, so let’s discuss what we are most excited for!

This 20th Century Studios film will carry on the exciting plot line, “As a collection of history’s worst tyrants and criminal masterminds gather to plot a war to wipe out millions, one man and his protégé must race against time to stop them”

This 20th Century Studios film is all about a teenage drag queen stepping into a new world. The film will star stars newcomer Max Harwood, Sarah Lancashire, Lauren Patel, and Richard E. Grant.

20th Century Studios is also releasing Antlers, starring Keri Russell and Jesse Plemons. This is an exciting Disney release because we are going to get a horror film. Produced by Guillermo Del Toro, the same producer who wanted to create a The Haunted Mansion horror film, so this will be an exciting and horrific venture.

Raya and the Last Dragon — March 12

March 12th will bring us our first Disney Animation Studios film of 2021! According to Insider, the film follows

Raya (Kelly Marie Tran) is a lone warrior from Kumandra, a kingdom where dragons and humans once lived in harmony. But all of the dragons except one disappeared when they sacrificed themselves to save humanity from an evil force. When that dark threat returns 500 years later, Raya goes out in search of the last dragon to bring unity back to the world.

April 9th is the day I am forever grateful that Disney acquired Fox. Bob’s Burgers, a comedic animated classic will be bringing us a full-length feature film. This film was delayed from 2020, but Disney has now provided us with a release date that is said to “scratch every itch” for all of us Bob’s Burgers fans.

This will be a musical comedy full lead under the reigns of creator Loren Bouchard, and we just cannot wait to hear Tina do her classic “uhhhhhhh” once again!

Set in a world where walking, talking, digitally connected bots have become children’s best friends, Ron’s Gone Wrong tells the story of an 11-year-old boy who finds that his robot buddy doesn’t quite work.

Robots really are going to take over the world, aren’t they?

Marvel fans are ready to jump back into the Marvel Cinematic Universe (MCU), and thanks to Disney, we can on May 7th. Avengers: End Game star Scarlett Johansen is reprising her role as Black Widow, but we will be taking a slight rewind to jump into this film’s plot.

The film takes place between the events of 2016’s “Captain America: Civil War” and 2018’s “Avengers: Infinity War” as Natasha Romanoff reunites with some old comrades to take down a mysterious villain named Taskmaster.

With so many Marvel IP’s like WandaVision coming to Disney+, Marvel fans are excited to see where Disney can grow the Marvel franchise.

If there is one thing Disney fans love, it’s a live-action fan. Top that live-action with a villain back story and we already have our popcorn bought! Cruella starring Emma Stone is going to bring the puppy hating hag to life, but she looks fabulous. The 101 Dalmatians remake will take place in the 70’s and have a very punk rock feel, so we have a feeling the Walt Disney Studios has a cool new interpretation for the classic animated film

Pixar is bringing us Luca on June 18th and we cannot wait! Insider noted the film as a “coming-of-age story about Luca who spends his summer on the Italian Riviera with his best friend. The catch? His friend happens to be a sea monster from another world.”

It will be interesting to see if this film ties into Disney’s Rivera Resort at Walt Disney World, since the locations and theming match perfectly.

Shang-Chi is a “fictional superhero appearing in American comic books published by Marvel Comics. The character was created by writer Steve Englehart and artist Jim Starlin, first appearing in Special Marvel Edition #15 (cover-dated December 1973) in the Bronze Age of Comic Books”, and is now headed to the Marvel Cinematic Universe.

Shang-Chi has never before been seen in the MCU so this is an exciting release. The production recently finished filming in October after having to deal with filming in a pandemic world. Productions operating under SAG currently must undergo COVID-19 testing for everyone on set, and on Shang Chi and the Legend of the 10 Rings over 40,000 COVID tests were taken without a single positive result.

Being one of the most anticipated Disney films of 2021, Jungle Cruise will be in our lives next summer! After pushing it’s 2020 release, Disney fans are excited to see the Jungle Cruise attraction brought to life with Dwayne ‘The Rock’ Johnson and Emily Blunt at the helm for what will no doubt be an unforgettable adventure!

If you have been following the Ben Affleck and Ana de Armas star love story, this is the film they met on! Deep Water is a thriller based on Patricia Highsmith’s book about two ex-lovers who play mind games with each other, and it’s a toxic relationship that we are all excited to see.

Walt Disney Studios is testing their luck in the biopic world with The Beatles! After acquiring the distribution rights to Peter Jackson’s “Beatles” documentary, the Disney Studio quickly got to work.

According to a press release, the film will go behind-the-scenes of the making of the band’s album “Let It Be” and their final live concert on London’s Savile Row.

The film was made using more than 55 hours of unseen footage that was filmed by Michael Lindsay-Hogg in 1969 and 140 hours of “mostly unheard” audio recordings from the “Let It Be” album sessions.

Directed by Ridley Scott starring Matt Damon and Ben Affleck, The Last Duel is a 20th Century Studios production that follows, “King Charles VI declares that Knight Jean de Carrouges settle his dispute with his squire by challenging him to a duel.”

Disney and Marvel have high hopes for this superhero comedy – they even said it will be bigger than Avengers: Endgame!

The film is based around the group of immortal beings created by cosmic Gods. Disney and Marvel are likely hoping this is their next “Guardians of the Galaxy”-like success.

The theatre kid in me is freaking out for this film!

The 1961 remake, “revolves around two star-crossed lovers from warring street gangs in 1950’s New York City,” and (SPOILER ALERT) follows the Romeo and Juliet plot for those who may not know!

Directed by Steven Spielberg, starring Ansel Elgort and Rachel Zegler as Tony and Maria, plus Ariana DeBose, Corey Stoll, Brian d’Arcy James, and Rita Moreno, who starred in the original movie — this film is going to make us feel all the emotions.

Halle Bailey was cast in the role of Ariel in July 2019, which sent fans freaking out in the best way! The remake will include original songs and new ones from Alan Menken and Hamilton creator and Moana star Lin-Manuel Miranda,

This Wes Anderson film is a Searchlight Pictures (formerly Fox Searchlight) production that pushed it’s 2020 release date. Although we are awaiting a new one, a 2021 release is likely. Insider notes, “Adrien Brody, Frances McDormand, Bill Murray, and Owen Wilson, join together for this story of an American magazine centered around three storylines. Timothée Chalamet also stars.”

The Eyes of Tammy Faye — TBD

Jessica Chastain stars in The Eyes of Tammy Faye with a hopeful 2021 release date. The film will be based on the documentary of the same name following the history of televangelists Tammy Faye and Jim Bakker — a right Chastain purchased for a mere $5,000.00.

Any more Disney films slated for 2021?

According to Insider, “Disney currently has two untitled 20th Century movies dated for September 10, 2021, and December 3, 2021. These will be announced at a later date. One of these two releases may be Amy Adams’ long-delayed “The Woman in the Window,” based on the novel of the same name.

Stay tuned to ITM as we continue to provide you all of the Disney, Marvel, and Fox films that are set to release in 2021!

What film are you most excited for?