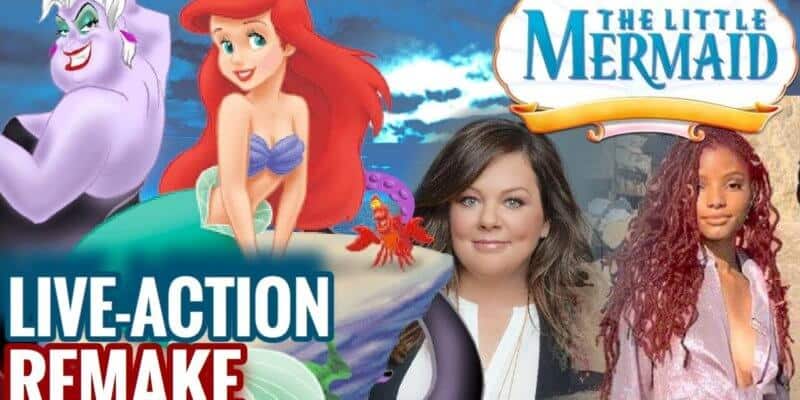 We’re learning more and more about the new live-action adaptation of Disney’s The Little Mermaid. And though we still have a few questions swimming around in our minds, we have learned some very interesting things about the new film this year, which by the way marks the 30th anniversary of the animated feature.

This is a question for which some Disney fans have answers, and others are at a loss for words, and for that matter, understanding.

Over the past several years, Disney has been hosting a revival of some of its most famous and successful classics, but that revival comes in the form of live-action remakes, and some Disney fans think it’s a great idea–a way to reintroduce the Disney classics into the mainstream and a way to familiarize a younger generation with the classics.

Opponents of Disney’s live-action revival movement say that the classics are exactly that–classic–and revival is not needed unless it means switching your old VHS copies for newly-digitized Blu-Ray and 4K versions of those classics. Some feel that an endless list of remade films that star live actors not only tarnishes the “classic” status of the films but also signifies to them that Disney has somehow hit the bottom of the barrel when it comes to imagination and creativity. (Pretty sure Disney invented both.) You decide.

When will the live-action film be released?

Sorry, no definite answers yet.

Our best guesstimates have Ariel swimming into theaters sometime before Walt Disney World’s 50th anniversary in 2021 since filming hasn’t yet begun. (They haven’t yet hired the actor to play Prince Eric just yet, so we hear.) But since Disney is the proverbial powerhouse when it comes to movie production, nothing will truly surprise us. That is unless The Little Mermaid live-action film is released before Santa drops down the chimney this year. (Wouldn’t that be something?)

But thanks to the magic of Disney and since 2019 has been a whirlwind year for live-action film releases–each one very, very successful at the box office–we won’t be shocked if it’s a bit sooner than we think.

Is There a Live-Action Little Mermaid Trailer?

No filming yet = no trailers yet. But we expect one–even if it’s short and somewhat cryptic like the short “trailer” for the live-action remake of Cinderella that showed only a 360-degree view of the glistening glass slipper.

Which actors and actresses have been cast so far?

An up-and-coming young actress from Freeform’s Grown-ish and the musical duo Chloe x Halle, Halle Bailey, won the part of King Triton’s youngest daughter–a move on the part of Disney that was unnecessarily met with backlash from some fans. But we think Miss Bailey will change minds as she plays the role of the lovestruck mermaid whose lifelong dream is to be the proud owner of a new pair of human legs and corresponding feet.

Many of the other casting calls have been one part speculation, one part rumor. For example, we’ve heard through the grapevine for a while now that Melissa McCarthy is up for the role of the evil sea witch Ursula, but this hasn’t been confirmed yet.

And we’ve also heard different things about what role Harry Styles, one-fifth of the boy band One Direction, might play in the upcoming film–from rumors that he’s been cast to rumors that he turned down the role. But so far, no confirmation of either.

It would appear that Oscar-winner Javier Bardem is among those being considered for the role of Ariel’s father, King Triton, who is angrily opposed to Ariel’s dream and to her repeated visits to the surface of the sea. We think Bardem would be perfect for this role. What do you think?

Though many of the casting rumors about actors and actresses thus far are only, well, rumors, a couple of vocal performers have been confirmed. Jacob Tremblay from GOOD BOYS will share his voice with the lovable Flounder, and Awkwafina will play the eccentric Scuttle.

Any word on who will direct the film?

The good news is that Disney has hired director Rob Marshall to help Ariel swim into theaters. Marshall is known for his work on Chicago and Into the Woods, two very successful musicals in their own right.

Marshall is well-experienced in producing musicals with copious budgets, and he’s a favorite for his work on Mary Poppins Returns, in which his talent for whimsy and nostalgia are very evident. Marshall has a lot in common with Guy Ritchie, Tim Burton and Jon Favreau when it comes to excellence in directing, and if that’s any indication of the success of The Little Mermaid, we’re in for quite the treat.

After all, these directors were responsible for Aladdin, Dumbo and The Lion King, respectively.

What we know so far makes it sound like much of the soundtrack for the original animated feature will be used in some capacity, meaning that songs like  “Kiss the Girl,” “Part of Your World” and “Under the Sea” would easily find their way into the live-action version of the film.

Rob Marshall is the go-to director for films heavy on a musical element, and Marshall has brought aboard Lin-Manuel Miranda (Mary Poppins Returns and Broadway’s Hamilton) as producer and to contribute new music to the film’s soundtrack. Miranda has plans to work with Alan Menken, composer of the award-winning soundtrack of the original animated feature from 1989.

We are definitely looking forward to this film. Do you plan to see it when it is released? And who do you think would be the right pick for Prince Eric and Ursula? Let us know in the comments below.