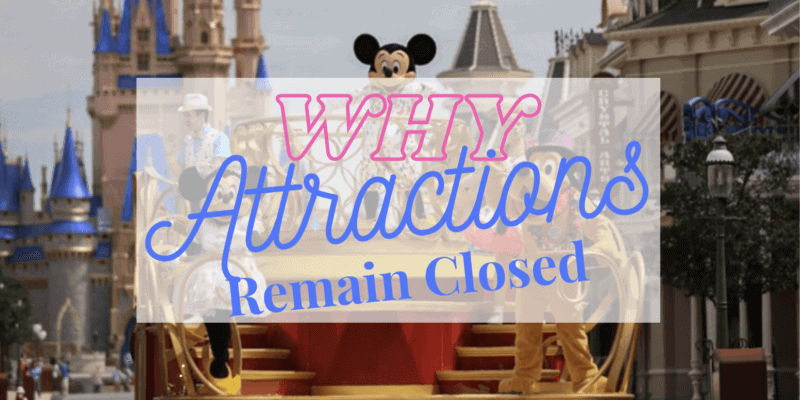 When Walt Disney World Resort in Orlando, Florida began the phased reopening of its four theme parks on July 11, it was with a number of new safety regulations and precautionary measures.

The Disney experience, as you might expect, is not the same as it was prior to the pandemic closure in March. As a matter of fact, certain Disney World attractions and experiences did not reopen with the parks for a number of reasons. Here, we take a look at why.

What is Permanently Closing

Some Walt Disney World Resort rides and experiences will not be returning at all. Primeval Whirl in Disney’s Animal Kingdom and Stitch’s Great Escape in Magic Kingdom’s Tomorrowland area will be permanently closing.

There have long been rumors of Stitch’s Great Escape getting a re-theme since the ride itself has not been open for some time. The attraction’s space was taken over by a Stitch meet-and-greet and has operated on a seasonal schedule since October 2016.

The closure of Primeval Whirl has led to online rumors that Dinoland U.S.A. might be getting a major renovation in the near future.

Disney has also announced that the Rivers of Light nighttime show will not be returning following Disney World’s temporary closure. Rivers of Light originally debuted in 2017 and received an update called Rivers of Light: We Are One in May 2019.

The Walt Disney Company has not announced replacements for either of these two attractions or the evening show.

What is Delayed Due to Pandemic

We’ve continued to report on the delay of attractions coming to Disney World as we have heard official statements from Disney. But according to a USA Today report, Disney has delayed the development of several new Walt Disney World attractions specifically because of financial issues related to the pandemic:

The Mary Poppins attraction at Epcot’s British Pavilion is postponed, while an overhaul of Spaceship Earth, one of Disney World’s most recognizable landmarks, will be delayed. The project was scheduled to begin in May. It will be the fourth update to Spaceship Earth since Epcot opened in 1982.

Other EPCOT projects have also been delayed, including the much-anticipated Remy’s Ratatouille Adventure ride in the France Pavilion. The Remy attraction is still likely to open for Disney World’s 50th Anniversary Celebration in 2021, but it’s status has been changed from “Coming Summer 2020” to “Coming Soon.”

Construction plans for the massive EPCOT Future World reimagining have also been altered, presumably as a direct result of the pandemic.

What is Not Available Due to Crowd Congestion

Crowd congestion is the final reason select Disney Park experiences are not available at this time.

Nighttime fireworks spectaculars, such as Happily Ever After at Cinderella Castle and Star Wars: A Galactic Spectacular at Disney’s Hollywood Studios, are suspended because they encourage large crowds to congregate in a relatively small space. At this time, Disney’s strict new social distancing protocols could not easily be enforced during these nightly events.

Parades throughout Disney World’s four theme parks are also temporarily unavailable due to crowding along the parade routes. Surprise character cavalcades are occurring daily, however. This gives Guests the chance to see Mickey Mouse, Minnie Mouse, Princess Merida, and other popular Disney Parks characters without directly interacting with them.

It is also worth noting that Disney World’s two water parks, Typhoon Lagoon and Blizzard Beach, have not yet reopened, presumably due to issues with wearing face masks around water and physical distancing challenges in a water park setting.

What are your thoughts on the experiences and rides that didn’t reopen with Disney World theme parks? Share your opinion about Disney’s changes in the comments!

Click here to book your next trip to Disney World!