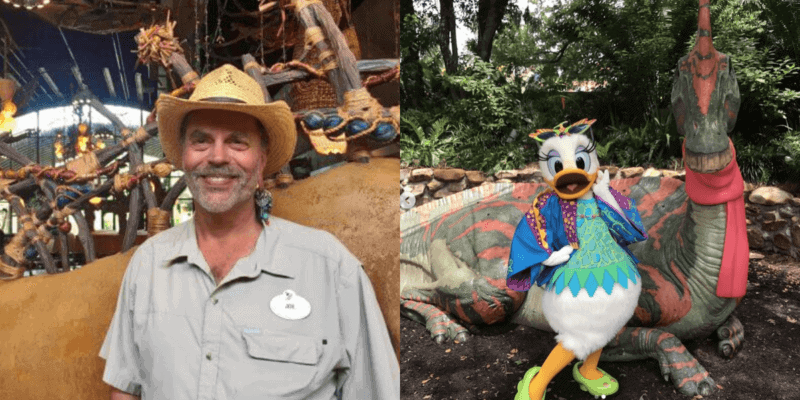 Over the past few weeks, Walt Disney Imagineer, Joe Rohde, has been giving his own personal tour of his beloved park, Disney’s Animal Kingdom at Walt Disney World. Sharing everything from cultural insights to engineering methods, the future-Disney legend has opened our eyes to what has become one of the most impressive theme park experiences in the country.

But in all of the park’s accuracy, there is one section that still breaks away for “kiddie stuff” and Disney IPs: DinoLand U.S.A. Among the carnival-like atmosphere, guests have the privilege to meet some of our favorite Disney Ducks including Donald, Daisy, Scrooge, and Launchpad McQuack. Rohde has spent his last two Instagram posts talking about the themed land and in doing so defended and explained why it made sense to have our favorite ducks in DinoLand, U.S.A., and he only needs to use evolution.

We could go on forever with Asia, but we’re moving to Dinoland, USA. A lot of our Disney’s Animal Kingdom research took us to far away foreign countries… But it also took us to some of the great paleontological sites in North America. Paleontologists like Phil Currie and Bob Bakker were kind enough to instruct us. We are very liberal about the dinosaurs that you encounter in this land, both in geography and chronology, though they are Cretaceous era creatures. Plus much of North America was ocean. In order to get the dinosaurs we wanted we have to imagine a chain of volcanic islands linking prehistoric North and South America sometime in the Cretaceous period. The Cretaceous era is about 80 million years long. Species often last only a few hundred thousand years…so a million or so. So there’s some leeway. However, if you see something that looks like a fossil of a Prehistoric creature, it is either a real fossil of a prehistoric creature or a replica of a real fossil. (The Carnotaurus in the queue line for the ride is a composite. The real Carnotaurus is smaller.) The interesting thing about dinosaurs is that they are created by our imagination as a result of research and speculation. The soft tissue and bone of dinosaurs is replaced by mineral in the process of fossilization… Making them officially “rocks.” We turn them back into dinosaurs by thinking about them. Because of this, there is always debate about their true nature. That debate is embedded in the land in the context of many of the graphics. Now, we haven’t updated those graphics since 1998, but the spirit is still there. Dinoland has a lot of humor and because of that I think we can relax some of the seriousness of some of the other themes and get away with some hijinx. Including the recent population of famous ducks who inhabit the land. Because after all, birds are dinosaurs, ducks are birds, therefore ducks are dinosaurs.

Rohde also acknowledges the breakaway from the intensity and accuracy of the rest of the park and praises DinoLand U.S.A. for what it is: “Dinoland has a lot of humor and because of that I think we can relax some of the seriousness of some of the other themes and get away with some hijinx.”

But, DinoLand is the perfect place for Donald, Daisy, Scrooge and Launchpad for another relevant reason: DuckTales (oo-ooo). With the rebooting of the beloved Disney Channel show, DinoLand U.S.A. is the most logical place to add those Disney characters! Because of course, that’s where our daring duck adventurers would be! Our friends are just off on yet another daring adventure and one can only hope they start to do more with them there.

With so many other amazing adventures like Flight of Passage, Kilimanjaro Safaris, and Expedition Everest, DinoLand U.S.A. often gets overlooked save for the Dinosaur dark ride. But the genius designer behind the park made sure to give the land its time in the spotlight–even though he confirmed they haven’t changed the graphics since 1998.

What’s your favorite part about DinoLand U.S.A.? Let us know in the comments!