Till death do us part: A Haunted Mansion proposal becomes a dream come true - Inside the Magic 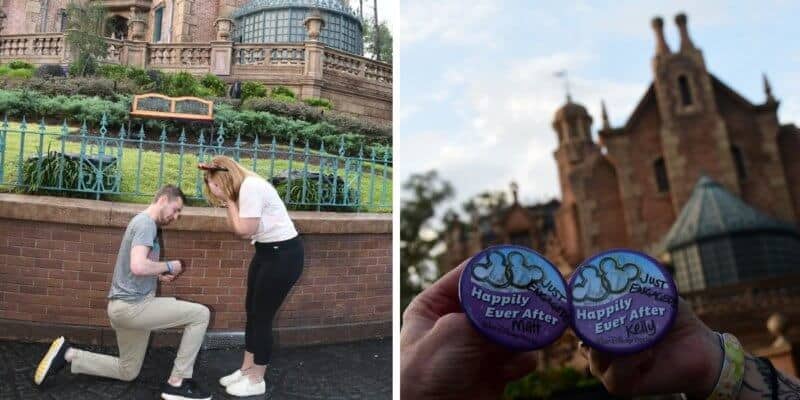 Halloween is my favorite time of year (and my boyfriend’s, too) so we decided to celebrate the holiday together by going to Walt Disney World and experiencing everything they had to offer. Mickey’s Not-So-Scary Halloween Party (which my boyfriend has never been to before), all of the fall decorations, and of course, the pumpkin treats!

We had this vacation planned for quite some time now and we were counting down the days. I couldn’t wait for him to experience everything Disney had to offer during Halloween.

October 25 finally arrived so we grabbed our luggage and before we knew it, we had landed in Orlando and were boarded onto the Magical Express. Off to Coronado Springs we go!

After we checked in, we dropped our stuff off in our room and made our way over to Magic Kingdom. (I had a Haunted Mansion FastPass booked for after our flight since that is our all time favorite attraction and we just couldn’t wait to ride.)

After some hassles, time delays, and frustrations, we finally made it into the theme park and made our way over to Haunted Mansion. We still had to wait for our return time so we went into Columbia Harbor House to cool off and grab some water. As we sat there, my boyfriend had asked if there was a PhotoPass photographer outside Haunted Mansion, which, if you know my boyfriend, was very strange since he isn’t a huge photo person. But of course I had to take advantage of this rare opportunity, so we headed over to the front of Haunted Mansion to kill some time.

When it was our turn for our photo, we did a normal posed photo and then a fun magic shot. I was about to step away and scan my band when I heard my boyfriend say, “Wait, let’s do one more.”

I turned around to go back to pose for one last photo and there he was, down on one knee. My jaw dropped, my hands started to shake, and the tears started flowing as people crowded around us and started to cheer. (Of course, I said yes.)

The Disney PhotoPass photographer wouldn’t stop taking pictures and captured the moment beautifully. After I scanned my band, another PhotoPass photographer, Courtney, came up to us and said “You guys are coming with me.” She had to ask why the Haunted Mansion since it isn’t your typical “proposal spot” and we explained it was our all time favorite attraction. (We even have a bedspread of the Haunted Mansion wallpaper at home). I had initially thought she pulled us aside to walk us onto the ride, but little did we know, we were in for a real treat.

Courtney walked us over to Memento Mori to grab us celebrating pins, which she wrote “Just Engaged!” as well as our names onto them. She then asked, “Do you guys want to walk around and take some pictures?” Of course, we couldn’t say no!

We went from Memento Mori to the graveyard to the front of the Haunted Mansion and took so many engagement photos, which all came out beautiful. Courtney then handed us off to another Disney PhotoPass Photographer, Aiden, who also took a variety of photos. After we had finished, we finally went on Haunted Mansion and then headed out of the park for the day.

The next morning, we went to the check in desk to add the celebration onto our vacation. The coordinator at the front desk was so excited for us that she added on extra FastPasses to our park tickets so we could enjoy even more attractions and character opportunities. But the Disney magic didn’t stop there..

The next day we got back to our room and had found a small gift on our dresser. The note read “Congratulations on your engagement, Matt and Kelly! Enjoy your Happily Ever After!” and included a variety of chocolate treats.

On October 27, we had reservations for breakfast at Trattoria al Forno, and when our waitress had noticed we were just engaged, she brought us champagne to toast and celebrate.

Toward the end of our trip, Matt and I had to go to our resort gift shop to pick up some packages we had sent back from the theme parks. When we received them, the cast member had notified us of another package that was also sitting back there that was labeled for us. Little did we know the PhotoPass photographers, Courtney and Aiden, who took our photos the first day we were there had sent us a gift.

We had great experiences with the Disney characters as well. I think Mickey Mouse was more excited than I was when he had found out about our engagement. And when we ran into Tigger, he did what he does best and wouldn’t stop bouncing!

Till death do us part.