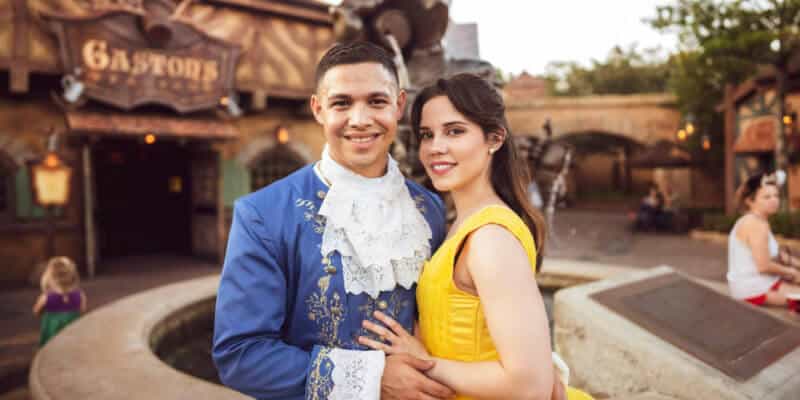 Loving Disney is a tale as old as time, and one couple had the most beautiful Beauty and the Beast proposal at the Most Magical Place on Earth!

There are few stories as romantic as Beauty and the Beast, so what better way to show the one you love how much you adore them than by staging the perfect Disney-themed proposal? Paul Rivera wanted to give his girlfriend, Ada Sulbaran, the perfect fairy tale engagement, so on their vacation to Walt Disney World, he made sure that she felt like a princess.

“Beauty and the Beast has always been her favorite Disney movie and she was telling me in the beginning of the year that she has been going to Mickey’s Not-So-Scary Halloween Party every year with her family,” Rivera shared. “I found out that Disney has a restaurant that looked exactly like Beauty and the Beast so I decided to have dinner there with her.”

The couple booked their September Disney World vacation back in May, and it wasn’t long before Rivera began planning for the proposal of a lifetime. After emailing Walt Disney World Resort extensively, he was finally put in touch with a Cast Member who works at Be Our Guest Restaurant, who helped make the proposal happen. Rivera wanted the proposal to be private, and with a little Disney magic his wish came true.

Rivera was even able to convince Sulbaran to take waltz lessons with him — little did she know that it was so they could recreate the ballroom scene from Beauty and the Beast during the proposal.

Rivera and Sulbaran arrived at Be Our Guest Restaurant on the night of Mickey’s Not-So-Scary Halloween Party dressed as Belle and Prince Adam. They toured Beast’s castle with their loved ones, and then after the couple shared a waltz in the restaurant’s ballroom, just like in the movie. At the end of the dance, Rivera dropped to one knee and proposed.

“She was just shocked throughout the whole dance and the moments afterwards,” Rivera shared. “I’m so blessed to have her and there’s no better feeling in the world than that.”

The future groom continued, ““I was extremely nervous, the whole time I was hoping that everything would go okay; that my mom would know how to use my camera because we had been practicing for a few weeks before her hands to get her ready. The one thing I wasn’t nervous about was her saying yes.”

The couple wish they could have a magical fairy tale wedding at Walt Disney World. But since that is out of their price range, they plan instead to have a Disney-themed wedding.

What would your dream Disney proposal be? Let us know in the comments!