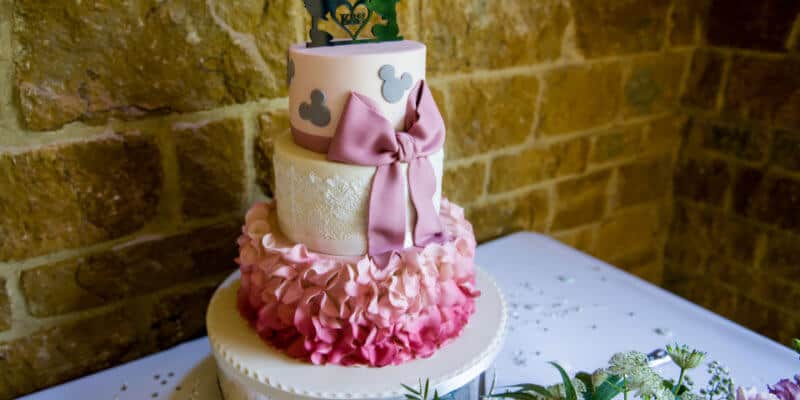 We know that millions of people in the world love Disney as much as we do. But are you so Disney-obsessed that you would want a Disney-themed wedding that feels like a fairy tale? One U.K. couple found a way to make their dream disney wedding a reality without having to fly all of their family to Walt Disney World.

Kristy Goldsmith from the U.K. grew up loving all things Disney. She always wanted her wedding to be at Walt Disney World in Florida, but being from the U.K. it would be pretty difficult for Kristy and her other half, Simon, to fly all of their loved ones to Orlando for the big day. And considering how much Disney Fairy Tale Weddings cost, a ceremony at the Wedding Pavilion at the Grand Floridian or underneath the Tree of Life at Animal Kingdom isn’t exactly budget-friendly. We can’t all ride to Magic Kingdom in a horse-drawn carriage for our big day!

Luckily, Kristy got to DIYing and created a magical Disney-themed wedding for under $20,000.

But if you’re not as in love with Disney as Kristy and Simon are, you might be wondering why they would have a Disney-themed wedding in the first place. But to Kristy, anyone at any age can love Disney and experience the magic.

“What I love about Disney the most is that anyone of any age can fall in love with Disney,” the bride said. “You’re never too old or too young and when you hear the music and see the castle, the feelings you have inside are just magical. It’s like a whole new world.”

Kristy and Simon had been together for almost a decade when Simon decided to propose in the Most Magical Place on Earth, Walt Disney World. But after Kristy began doing some research, she realized that getting married in Disney World can be extravagant and expensive, and Disney-themed décor can cost a lot, as well.

So Kristy came up with a great idea to bring the magic of Disney to the U.K. for her and Simon’s best day ever: she would create her own Disney decorations for a fraction of the price!

Kristy’s maid of honor even organized a Disney-themed bachelorette party (or as it’s called in the U.K., a hen party), where all of the guests dressed in Mickey and Minnie colors.

Here’s how Kristy explained how the Disney-inspired wedding came to be:

“Me and Simon have been together 11-and-a-half years, since we were 15. We met at middle school, went to the same university and studied the same degree,” the bride said. “I’ve always loved Disney and I wanted to get married there. We couldn’t have only half the family attending so we thought we would bring Disney to the UK and have a Disney-themed wedding.”

“We planned everything on spreadsheets. This tracked saving, budget, deposits and also an itinerary of what needed to be done when. It went perfectly,” Kristy continued. “I found it very hard to find anything Disney for the wedding which wasn’t very expensive, so I decided to try and do it myself. I also didn’t want loads of ‘in your face’ stuff so I knew by doing it myself I could take something classic and put a hint of Disney into it.”

And when it came to those special touches of Mickey Mouse and pixie dust, Kristy and Simon’s day wasn’t lacking one bit. There were hidden Mickeys all over the place! Kristy created her own Mickey-shaped confetti and included Mickey Mouse colors of black, red, yellow, and white all around the venue. Everything was created with Kristy and Simon’s love of Disney in mind.

“I had a Mickey and Minnie shaped cake topper made to match our Disney cake, created Rose heads in the shape on Minnie and Mickey heads, I made my own save the date cards, invites, menus and order of service, the favours were candles with a Mickey and Minnie motif on and I also created our own label for the sweet packets,” explained Kristy.

Any couple on a budget can take note of Kristy’s work and create their own DIY Disney-themed wedding. All it takes is faith, trust, and a little bit of pixie dust, and your Disney wedding dream can come true!

Would you want to have a Disney-themed wedding? Let us know in the comments!