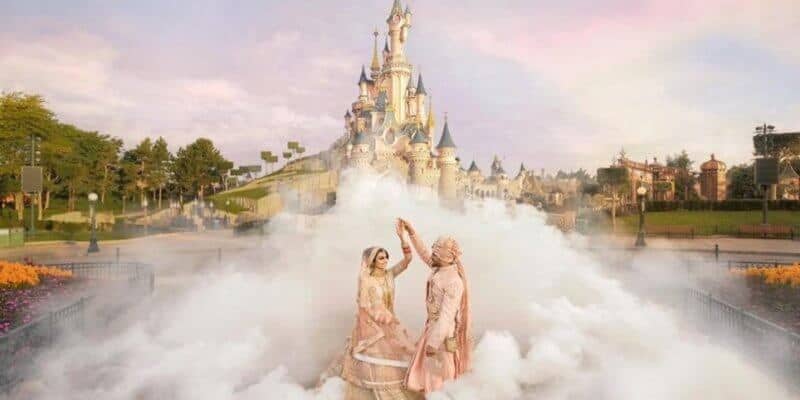 You can get married at a Disney Park without sacrificing your cultural traditions. A Disney-loving couple blended their Indian culture with their passion for Disney Parks, and the results were an absolutely magical Bollywood Disneyland wedding.

Varun Bhanot and Anisha Seth decided to combine a Bollywood wedding with the magic of Disneyland Paris, and we can’t think of any wedding that looks more magical than this one. The two are actually the very first couple to bring Indian cinema to Disneyland Paris, and they look like absolute Bollywood royalty right in the middle of one of the happiest and most magical places on earth, a Disney park.

In order to get married when the park was closed, the wedding took place late in the night, giving Sleeping Beauty Castle an enchanting glow as their backdrop. Bhanot and Seth exchanged vows during a midnight ceremony right outside perhaps the most beautiful Disney castle at any Disney park. Mickey and Minnie even joined them on the dance floor for the couple’s first dance.

Around 350 guests were in attendance for the wedding, which took place over the course of two days last month. They were treated to a meal inspired by Disney’s “Aladdin,” which included both Middle Eastern and Indian cuisine. Later, everyone danced to bhagra with Goofy, the perfect blend of Indian culture and Disney magic. Seth described the whole “fairy tale wedding” as the start of the couple’s own “happily ever after.”

“I know our guests had a great time,” said Seth. “I think it was definitely one of those things that you know has never been done…People just enjoy the magic of the place. When we went on the rides, it was nice to see all the children enjoying the Disney magic.”

“Paris is the city of love – that all played into the idea. We have been Disney fans for years,” added Varun.

Take a look at some more snapshots of the special Bollywood Disneyland wedding below:

What would your dream Disney wedding look like? Let us know in the comments!

Comments Off on Couple has magical Bollywood wedding at Disneyland Paris