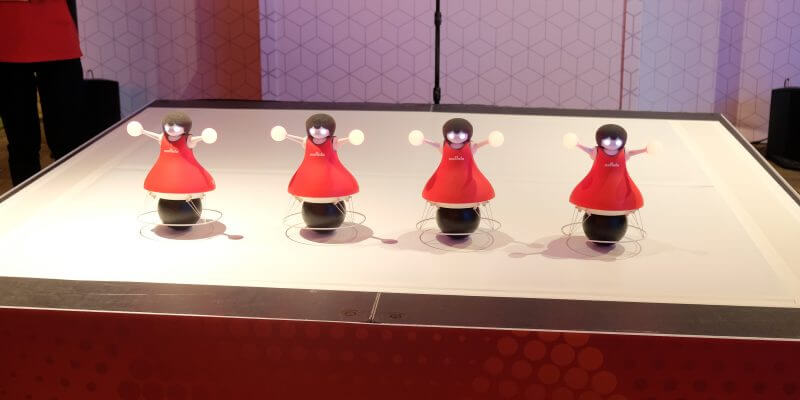 In support of National Engineering Week, which celebrates all things STEM (Science, Technology, Engineering and Math), Murata brought their dancing cheerleader robots to Epcot’s SpectacuLAB for a special demonstration.

Murata, a Japanese manufacturer of electronic components and also the official sponsor of Epcot’s SpectacuLAB show in Innoventions, stopped at the theme park for a special presentation of their famous Murata Cheerleader Robots. The presentation featured the dancing cheerleader robots performing a small group dance number to show off the technology created by the manufacturing company.

The robots sit on top of balls and use advanced sensing, communication, and group control technologies to stay balanced as they quickly move and dance around. The robot cheerleaders were developed by a team of 21 engineers and scientists who worked for over two years to create the robots, which had to be synchronized through special technologies so they can dance in unison.

The Murata Cheerleaders’ cheeks light up to signal that they are “excited” and also ready to be placed on their ball.  Their pom-poms were designed to change colors as they perform the “wave” and dance in specially designed patterns and follow-the-leader maneuvers. Through the power of gyro sensors, found in most digital cameras, car navigation systems and electronic stability controls systems that prevent cars from skidding, the robots are able to remain in an upright position and swiftly move in any direction. The idea behind the robot cheerleaders and their cute but also technologically advanced dancing abilities is to reach out to a younger audience of kids who are interested in STEM careers. With these robots, Murata is able to show young ones the possibilities of working in STEM related jobs and the many opportunities that are out there to create incredible technologies that can advance our society, similar to the technology found in the dancing robots. Some of the technologies found in these robots can also be found in your cellphone and many other electronics you use on a daily basis. For a closer look at some of these technologies, check out the video above.

The special cheerleader robots will be at Epcot’s SpectacuLAB today until 7 PM and throughout the rest of tomorrow. The robots will also be making a few more stops at some local elementary schools in the Orlando area to continue to spread the awareness of STEM related career fields in celebration of National Engineering Week.

For more information on the SpectacuLAB show, be sure to check out some of our previous coverage. You can also see more details about SpectacuLAB on Disney’s official website.