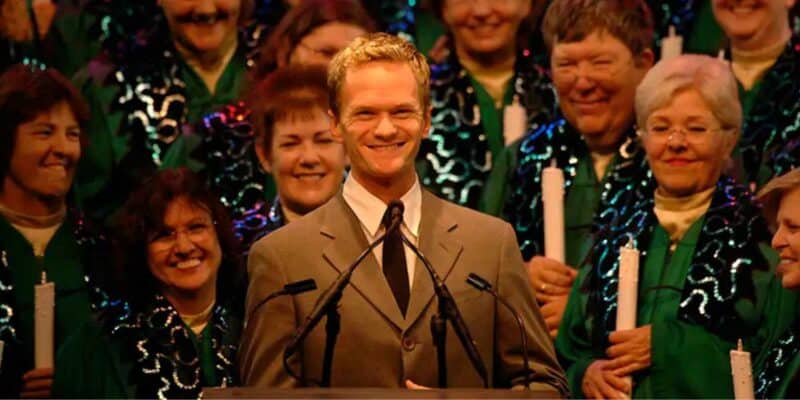 Amidst all the mainstay attractions and experiences at the Walt Disney World Resort, there are multiple seasonal exclusives that happen throughout the year.

And for one such event, actor Neil Patrick Harris decided to mock former CEO Bob Chapek right before taking on Disney World.

The Candlelight Processional at Walt Disney World Resort takes place yearly during the festive season at EPCOT Park. The annual event tells the biblical story of a savior born in Bethlehem and is narrated by a variety of celebrity guests on selected dates during the course of its run.

In addition to the tale, the Candlelight Processional also features an orchestra and choir to truly bring the spectacle alive; the event takes place at 5:15 p.m., 7:00 p.m., or 8:30 p.m. at the America Gardens Theatre at EPCOT, and is a feature of the EPCOT Festival of the Holidays.

While each celebrity is there to recite the biblical tale, each can be expected to inject some of their own unique individuality into their performances. This is what happened during How I Met Your Mother star Neil Patrick Harris’ dates. The actor opened his recital with a joke; a joke taking aim at former CEO Bob Chapek. Harris said: “EPCOT — an acronym. And I’m pretty sure the C doesn’t stand for “Chapek”.

Shortly after Harris mocked Mr. Chapek live on stage, the Uncoupled star took to the Disney World theme parks with his husband David Burtka, and children. Sharing to Instagram, Harris spoke about his Disney experience at the Candlelight Processional and his vacation to Walt Disney World; the family was even joined by Law & Order: Special Victims Unit actress Mariska Hargitay and her own family. The actor wrote:

We had a most amazing Disney adventure last week! I got to narrate the exquisite Candlelight Processional (my 10th year!), our family created new holiday memories, and we brought friends who had never been to WDW before! Who doesn’t love Disney firsts!

Thank you @waltdisneyworld for showing such kindness to our family, for allowing Candlelight to exist, and for making so many dreams come true. Our family deeply appreciates it. #grateful @dbelicious @therealmariskahargitay @disney

During his trip, and following on from his Chapek joke, Harris was permanently honored at the Disney Resort with a special nod at one EPCOT location.

From Disneyland Resort in Anaheim, Southern California to Walt Disney World and Disneyland Paris, Disney Parks are a hotspot for celebrity encounters, and Guests can anticipate a sighting or two while on their own Disney vacation.

As for Bob Chapek, the ex-CEO was dramatically ousted by the board of The Walt Disney Company last month with Chapek’s predecessor Bob Iger coming back to steer the House of Mouse over the next two years. Chapek faced criticism during his short tenure as the Disney chief — from introducing more paid elements to Disney Parks to his handling of the unprofitable Disney+ streaming service, it was reported that CFO Christine McCarthy led the charge to have him removed from office.

The search is on for who will take the prestigious office after Bob Iger once more steps down in two years’ time.

Have you ever spotted a celebrity at a Disney theme park? Let us know in the comments down below!