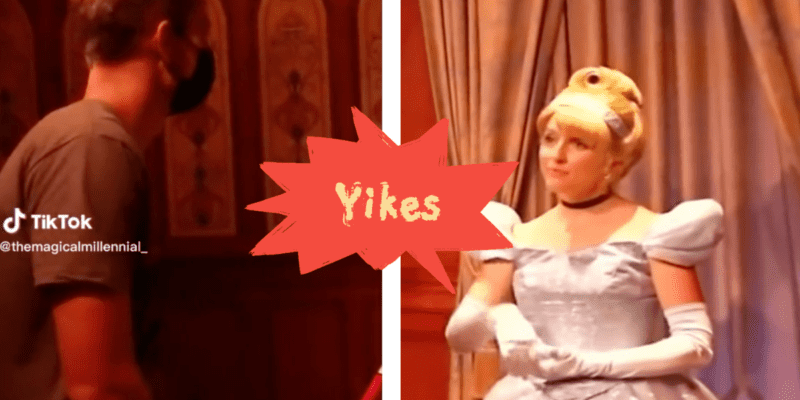 It’s not an easy time to be a Disney Parks fan. Many have been overwhelmingly unhappy with the state of the Parks since the promotion and subsequent ousting of former Walt Disney Company CEO Bob Chapek.

But this week, “Disney Adults” are on the attack instead of the defense. It started when Disney Influencer Megan The Magical Millennial (@themagicalmillennial) shared a TikTok in which a man acted inappropriately towards a Disney Princess. She chastised him for his behavior:

#stitch with @onthebed13 Yikes. Idk what this account is but in no way is this funny 👎🏻 #disney #disneyparks #nope #tryagain #foryou #disneyfyp

At Princess Fairytale Hall in Magic Kingdom at Walt Disney World Resort, the male Guest repeatedly asked Cinderella what her real name was. “Before work,” he said, trying to get her to break character on camera – an action that could get her fired.

“Honestly, grow up,” Megan replied. “And that’s coming from a Disney Adult.”

Commenters swarmed to defend the Disney Princess against the male TikToker. “I could not have been near him in line…I would’ve lost it!” @crazycaffeniatedlife wrote.

“People need to either believe the magic or just keep their mouth shut ✨️,” @daatash said.

“Because of folks like this guy I’m always hyper protective of our Royal hostess,” wrote @tallishhhobbit, a Cast Member at Cinderella’s Royal Table.

This isn’t the first controversy over filmed interactions with Disney character performers. Some Disney Cast Members advocate for Disney Parks to ban filming characters to prevent influencers from using them for views.

Please be respectful toward all Disney Cast Members, including Disney character performers. Keep the magic alive!