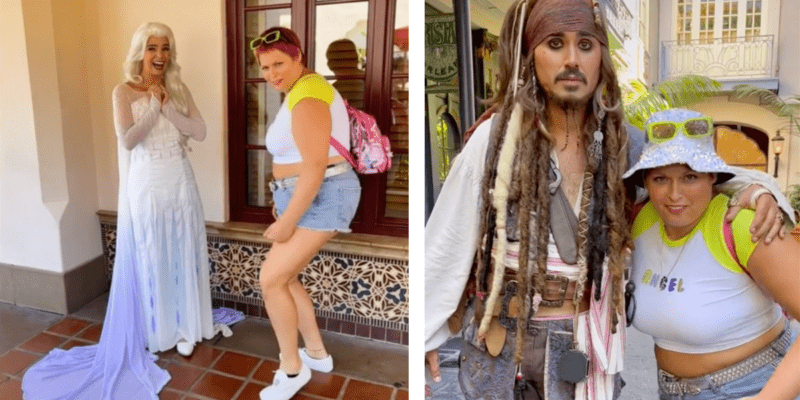 TikTok trends have changed Guest behavior at Disney Parks. One encouraged Guests to stick their bare feet in Disney Park ride water, while another recommended Guests wear inappropriate clothing against Disney’s Dress Code to get a free shirt. So many Guests tried this “hack” that Disney Cast Members stopped gifting shirts.

On August 18, Pearl Cooley (@pearliersparklez2) visited Disneyland Park. Cooley is a TikToker beloved for dancing and filming TikToks in public. Often, Cooley will run up to a stranger, ask them to film a TikTok for her, and try to make them laugh with an outlandish story or dance move.

During her visit to Disneyland Park and Disney California Adventure, Cooley asked Disney characters to film TikToks with her – as confirmed by another Guest that visited the Disney Parks that day. Once the camera was recording, Cooley did her famous “hounding” dance – where she dances and sings to “Hound Dog” by Elvis Presley – one of the moves that made her viral:

While almost all of the comments were supportive, a few unfamiliar with Cooley asked why she danced like that. The video gained so much traction that Jessica (@TremaineTok), a former Disney entertainment Cast Member and character performer known for Disney Parks commentary, decided to speak out on it:

Jessica wasn’t familiar with Cooley and described “hounding” as “some weird, awkward TikTok trend.” She felt Cooley’s video was inappropriate and exploitative.

“The looks on those characters’ faces [are] so uncomfortable,” Jessica said. “Literally, this person is using these performers as a prop so that they can make viral Internet content.”

“Yeah, no. That ain’t it,” Jessica argued. “These people do not get paid nearly enough to deal with all that nonsense or for you to use them for money and clout. Because at the end of the day, even if you’re not getting a dollar amount from making these videos, you’re still getting attention and clout on a public platform. That’s still exploitative.”

Most comments defended Cooley, especially as she asked for the characters’ permission before filming. “They’re not even bothered, why are you?” @stephaniekate481 asked.

Cooley’s fans told Jessica it’s “not that serious” and that she “must be fun at parties.” Many said she’s already viral for “hounding” and other comedy videos – she wasn’t filming with Disney characters for clout or attention any differently than she does everywhere else.

“It’s not ‘a [tik] tok trend’ it’s literally her entire content,” @king_armideon said. “She’s the only person who does this in random places. She’s also a sweetheart.”

A few former entertainment Cast Members on TikTok have asked Guests not to post videos of performers for “content.” We recommend asking permission before filming anything out of the ordinary with a Disney character performer, but taking videos of your meet-and-greet is allowed and encouraged!

What do you think about Cooley’s Disneyland Resort dancing video?