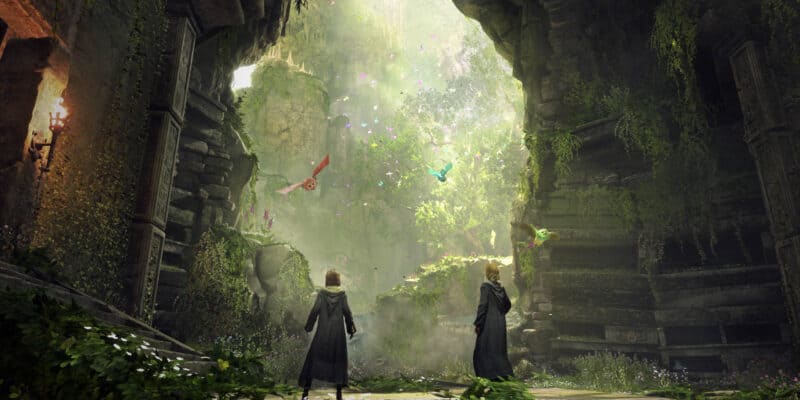 Hogwarts Legacy (2023) will be hitting shelves in February 2023, and though some fans are threatening to boycott the game due to all the JK Rowling controversy from the past couple of years, it’s likely that Warner Bros. will have yet another huge Wizarding World hit.

The game allows players to customize their character, pick their house, learn how to brew potions and master spells, befriend fellow students, and explore the Wizarding World (the only thing you can’t do in the game is play Quidditch, though you can still learn how to fly a broomstick).

So, what famous Wizarding World locations will players be able to explore in the game? Well, obviously, Hogwarts School of Witchcraft and Wizardry will be the main hub, and from there, you’ll have the opportunity to venture to places far beyond, including the Scottish countryside.

Along with never-before-seen places, the game will feature well-known areas from the Harry Potter books and movies, such Hogsmeade Village and the Forbidden Forest. And now, Hogwarts Legacy has revealed a special look at the Forbidden Forest in the form of some eerie footage.

“What awaits you in the Forbidden Forest?”

While very atmospheric, the short video doesn’t really reveal much, though there is something very unsettling about it. It’s likely that Hogwarts Legacy is teasing Forbidden Forest-based quests, much like the PlayStation-exclusive “Haunted Hogsmeade Shop” quest.

Check out the “Haunted Hogsmeade Shop” trailer below:

Needless to say, the quest looks very horror-esque (something the Harry Potter franchise is hardly a stranger to), but will Forbidden Forest-related quests follow a similar path? After all, it is home to the likes of giant spiders and other terrifying magical creepy-crawlies…

In the Harry Potter books and movies, the Forbidden Forest is a vast wooded area that borders the edges of Hogwarts. It’s home to all sorts of Fantastic Beasts — some friendly, some not so much. It also has many dark secrets, which will undoubtedly feature heavily in the game.

Despite there being no Quidditch (is it possible Warner Bros. is planning a separate Harry Potter-themed Quidditch game?), it looks like Hogwarts Legacy will have everything a Harry Potter fan would want from an open-world game.

Check out the official trailer for Hogwarts Legacy below:

Do you solemnly swear to get up to no good in the Forbidden Forest in Hogwarts Legacy? Let us know in the comments down below!

Comments Off on “What Awaits You In the Forbidden Forest?” — ‘Hogwarts Legacy’ Continues to Tease That It’s Part-Horror