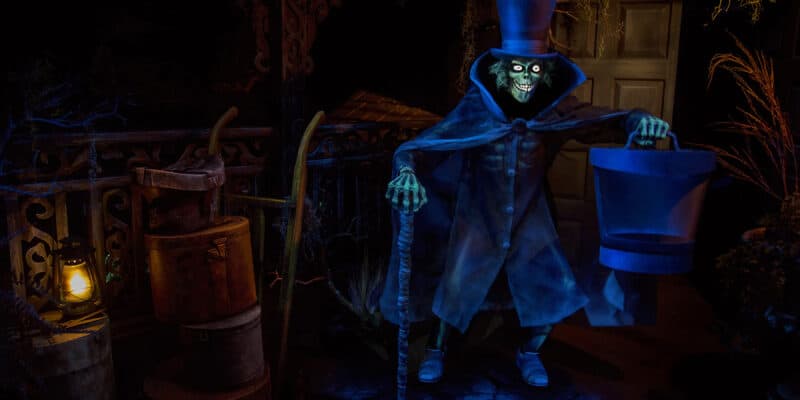 During this year’s Disney D23 Expo “A Boundless Future: Disney Parks, Experiences and Products” panel, we have seen so much exciting news for Disney fans all over the world, with exciting new projects coming to Disneyland Resort, Disneyland Paris, and of course, Walt Disney World Resort.

Walt Disney Parks and Resorts Chairman Josh D’Amaro said during this panel that Disney has heard fans of a popular Magic Kingdom attraction, who have been eager to see a popular character arrive at the Park, and mentioned that he would “materialize” very soon!

Foolish Mortals will finally welcome the famous Hatbox Ghost at Magic Kingdom’s Haunted Mansion very soon! While an official date was not mentioned, it was stated that the Hatbox Ghost will arrive at the Orlando theme park in 2023.

Foolish mortals, prepare yourselves for a new happy haunt at the Haunted Mansion. The Hatbox Ghost has heard your calls and will materialize next year. You may recognize this popular character from the attraction at Disneyland Resort in California.

During the presentation, Josh D’amaro also announced the exciting arrival of other characters, including the Mandalorian and Grogu meeting Guests at Star Wars: Galaxy’s Edge in Disneyland Park starting mid-November, and Smart Hulk, a breathtaking hero coming to Avengers Campus in Disney California Adventure starting next week!

Disney just dropped a ton of exciting announcements, including opening dates of highly anticipated lands and attractions like World of Frozen at Hong Kong Disneyland and TRON Lightcycle Run at Walt Disney World Resort, more details on the fun retheming of Splash Mountain, opening as Tiana’s Bayou Adventure in 2024, and even some very exciting teases of projects that could come to Magic Kingdom and Disney’s Animal Kingdom inspired by Coco (2017), Encanto (2021), Zootopia (2016), Moana (2016), and an idea inspired by Disney Villains. Visit Inside the Magic to learn all the exciting information at this year’s Disney D23 Expo!

Are you excited about the iconic Hatbox Ghost materializing in Magic Kingdom at Walt Disney World? Let us know in the comments below!