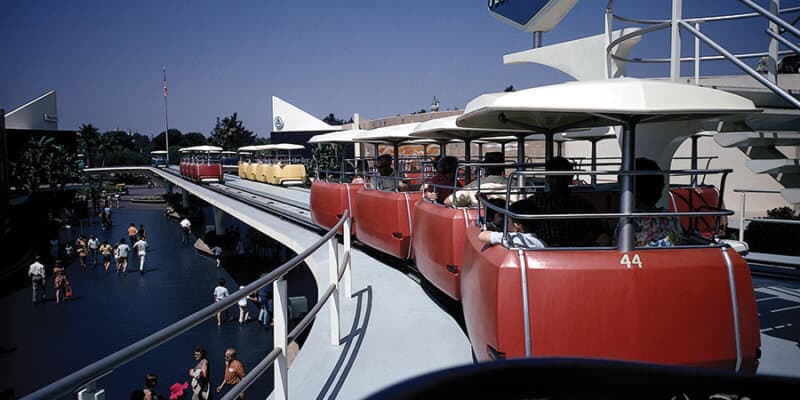 Few Disney attractions are as highly-regarded as the PeopleMover. Over the years, this attraction became a beloved and incredibly-popular ride located in Disneyland’s Tomorrowland.

While on the PeopleMover, Guests would board four rows of “futuristic” cars propelled with Goodyear tires which were strategically positioned in the tracks that pushed the cars on the beams.

The ride officially opened on July 2, 1967 and quickly gained popularity, seeing various updates and temporary re-themes as the PeopleMover made its way through Space Mountain and the now extinct Adventures Thru Inner Space.

Unfortunately, the ride closed forever on August 21, 1995, being replaced by the infamous Rocket Rods, a ride that many would consider a failure. The support rails for the PeopleMover began deteriorating when the Rocket Rods called Tomorrowland home, as the attraction demanded too much of the beams to carry the fast-moving and always-breaking cars throughout Disneyland.

Guests have been extremely vocal about the current state of the PeopleMover, claiming it’s extremely ugly and an example of a “bad-show” at the Resort. Since its closure, nature has been slowly taking over the tracks, with trees and vines as well as rust completely covering the remnants of the attraction.

We were expecting some news on Disneyland’s Tomorrowland, including a potential update on the seemingly abandoned ride. Disney D23 is “The largest Disney fan event in the world,” and this year’s expo will be no different. This year’s  D23 Expo Presented by Visa celebrates the wonderful worlds of The Walt Disney Company, including Disney, Marvel, Pixar, and Star Wars, across film, television, theme parks, and more!

As many Guests have pointed out for decades, you can still see the empty beams that once propelled Guests high above the Disneyland ground throughout Tomorrowland, including in the Space Mountain queue area. While driving through Autopia, you’ll still see the discolored PeopleMover beams standing tall throughout the area.

However, Disney’s Park showcase ended Sunday afternoon with no mention of Disneyland’s PeopleMover. The thought of the PeopleMover being replaced is a stretch but still could happen, especially considering all of the crazy ideas Disney threw around toward the end of the showcase.

This ride has thankfully remained fairly unchanged, though it has seen minor updates to its on-ride narration over the years.

Do you miss Disneyland’s PeopleMover?