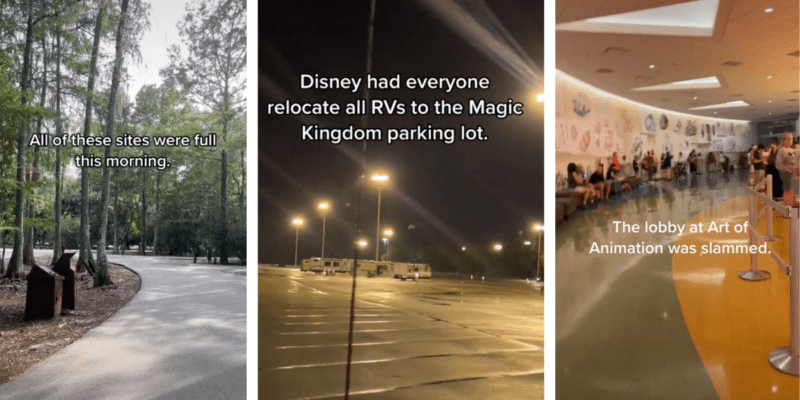 Hurricane Ian hit Florida on Wednesday just one mile per hour shy of a Category 5 storm. While coastal areas like Naples and Fort Myers will get the worst of the storm, Central Florida expects tropical storm-level winds.

“We’re staying at Fort Wilderness Resort and just got hurricane notices from Disney,” Amber said in her first video, posted on Monday. She showed now-empty, evacuated campsites. “All of these sites were full this morning.”

In her second TikTok, Amber showed the crowded lobby at Disney’s Fort Wilderness Resort and Campgrounds:

After visiting the lobby, Amber updated her followers once again:

Sorry for the scattered talking. A lot goes through your mind when you need to pack up 4 kids quickly. Grateful for Disney’s calm in the chaos. #hurricaneian #waltdisneyworld #fortwildernessdisney #fortwildernesscampground #disneyresorts #rvtok #rundisney #rvlife #rvlifestyle #rvtiktok #hurricaneianprep

“We were just told that we need to pack our RVs up and evacuate,” Amber said. “We have until tomorrow, but our options are limited, if we wait until then, on what to do, where to go… We chose to move tonight so that we didn’t have to split our family up.”

As she drove through a storm at Fort Wilderness Resort on a golf cart, Amber explained that her family would pack up their RV, park it in the Magic Kingdom parking lot, and head to a new Resort.

In her fourth video, Amber showed all the RVs parked in the Ursula Parking Lot at Magic Kingdom’s Transportation and Ticket Center on Monday night:

“The CMs were very helpful and answered any questions we had,” Amber explained. “Since we are a larger family, we were sent to Art of Animation. Port Orleans was an option for smaller families.”

In the comments, Amber revealed that Disney didn’t make Guests pay for the new Resort. However, in a final video on Tuesday, Amber said that her family chose to leave Walt Disney World Resort:

“After watching the hurricane strengthen and shift, we decided to check out early. The lobby at Art of Animation was slammed,” Amber explained. “Things are replaceable, but we knew we had time to leave.”

Amber showed a crowded lobby at Disney’s Art of Animation Resort and dozens of RVs parked at the Transportation and Ticket Center. Amber stated that while she knew her family was safe at Disney, she also knew they had time to save their RV from potential damage.

We hope everyone in the path of Hurricane Ian stays safe.