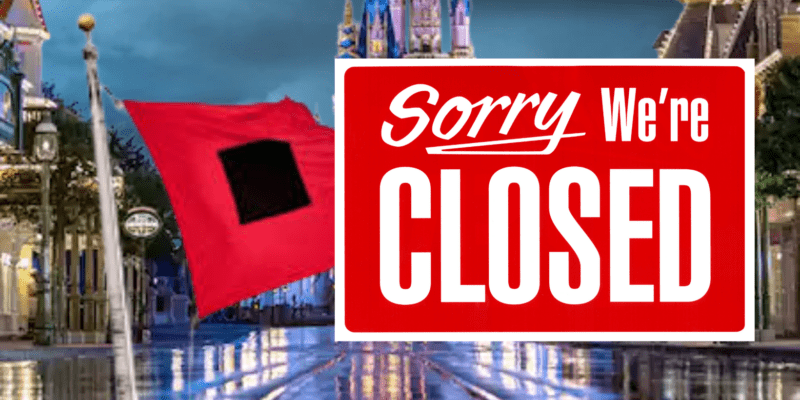 Hurricane Ian made landfall in Florida on Wednesday as a dangerous Category 4 storm, and it continues on a path of destruction into the state of Florida. As with all hurricanes, there remains a level of uncertainty about Ian’s track, but one thing’s for certain: much of Florida has been shut down by the massive superstorm.

JUST IN: Disney World has informed cast members (employees) that the theme parks and water parks will be closed Wednesday and Thursday due to Hurricane Ian. Disney Springs will also be closed on Wednesday. pic.twitter.com/Vnfqqltq10

Per Disney World’s official website, there is no official word about reopening, but the site does state that Disney will continue to monitor the situation. Cirque du Soleil’s Drawn to Life is slated to reopen on Friday, and current plans are for the 8:00 p.m. show to take place on September 30.

Universal Orlando Resort also announced it would be closed on Wednesday and Thursday because of the hurricane. Halloween Horror Nights is also canceled on September 28 and 29. The Resort says it will reopen on Friday “as conditions permit.”

The resort anticipates reopening on Friday "as conditions permit." pic.twitter.com/CvdtTz5FSF

Kennedy Space Center was originally scheduled to remain open on Wednesday, but ultimately announced plans to be closed on Wednesday and Thursday.

Kennedy Space Center Visitor Complex will be open to visitors for regular business hours (9 a.m. to 5 p.m.) on Wednesday. The complex will then be closed on Thursday. pic.twitter.com/zfXS3IKv3A

In a message on its official website, Kennedy Space Center announced it would be closed both days:

The visitor complex will close Wednesday, September 28 (and September 29) for the safety of our guests and crewmembers. Those with existing reservations will be automatically refunded within 1 billing cycle.

If you have purchased Kennedy Space Center Visitor Complex tickets through third-party suppliers, travel agents or tour operators please contact them directly for information regarding their cancellation or change policies and procedures.

Additionally, Orlando’s ICON Park and Carousel on the Promenade closed operations on Tuesday ahead of Ian’s expected landfall. According to ICON Park’s website, the venue will be closed on Wednesday and Thursday, though some restaurants on property were to remain open on Wednesday until weather deteriorated.

The Wheel at ICON Park and Carousel on The Promenade closing today ahead of Hurricane Ian. pic.twitter.com/JxiYNmhLQC

Other businesses, schools, and the like are closed in preparation for Hurricane Ian, per Axios.com. They include the following:

Florida airports have also been affected by Hurricane Ian. Many of them announced closures related to the incoming storm. They include:

Comments Off on Hurricane Ian Renders Most of Florida Inoperable as Resorts, Businesses, Schools, and Airports are Closed Around the State