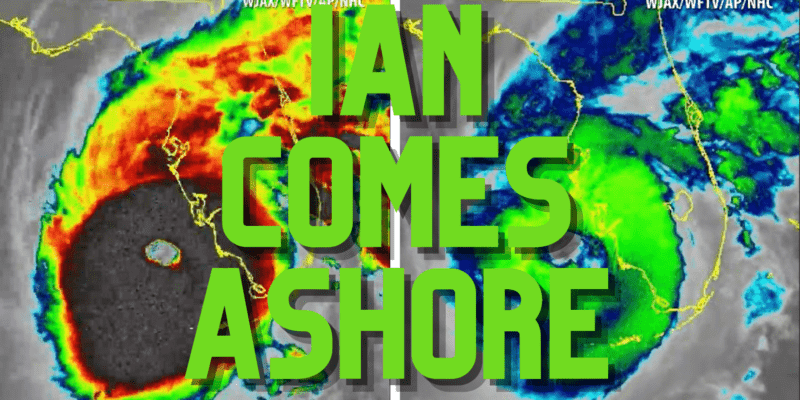 Shortly before 12:30 p.m. ET on Wednesday, the eyewall of Hurricane Ian finally made it onshore in Florida, and it looks as though the angry beast may be “carving” its way directly toward Orlando.

The Orlando Sentinel reports that the eyewall of Ian, swirling with winds near Category 5 hurricane status, began to make landfall over Sanibel Island in the southwest part of Florida just before 12:30 p.m. on Wednesday. The National Weather Service says that the enormous storm is projected to hit Orlando Wednesday night.

RELATED: Disney World to Close Ahead of Hurricane Ian’s Arrival

Winds near Sanibel Island were measured at 71 miles per hour, sustained, and gusting up to 98 miles per hour. The National Weather Service has issued an “Extreme Wind Warning” for much of Lee County and Charlotte County, including the cities and towns of Cape Coral, Estero, Bonita Springs, and Sanibel. The warning expires Thursday morning at 12:45 a.m.

11am Wednesday Ian Update: Winds holding at 155mph as Ian should make landfall near Sanibel Island within the hour. Track has been ever so slightly adjusted east in Central Florida, but Ian is so large, the track move makes no difference for our impacts. pic.twitter.com/8vYDKzgKXn

At this time, the actual path of the storm is still uncertain, but current models suggest Orlando could take a direct hit from the massive storm. Theme parks in Central Florida are closed Wednesday and Thursday in an effort to keep Guests and employees safe. Disney World, Universal, and SeaWorld were among the first to announce the closures, and since those announcements were made, Disney has also shared that Guests with tickets affected by the Resort’s closing will have an extension on their expiration date, through September 30, 2023.

This continues to be an ever-evolving situation, and as such, we will continue to update this story as more information becomes available.