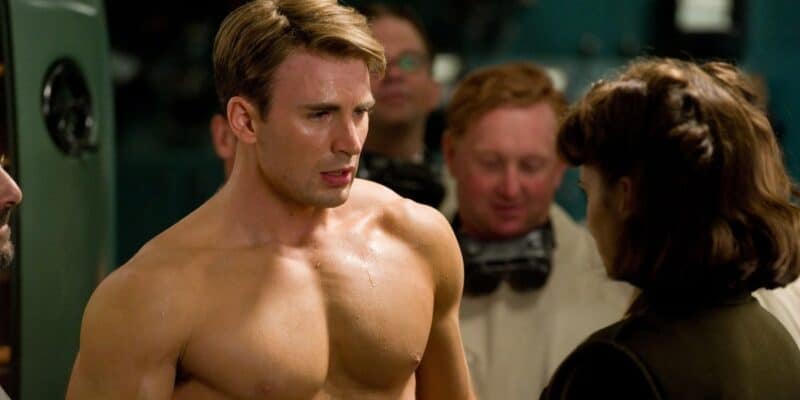 ***SPOILERS FOR SHE-HULK: ATTORNEY AT LAW***

At first, fans might be confused about how the characters might have a connection since neither character has ever met in the MCU, but fans did learn that Peter Quill’s grandmother did meet Captain America on one of his USO tours.

During the post-credit scene for She-Hulk, Jennifer Walters pretends to be wasted and gets Bruce Banner to reveal that Steve Rogers didn’t die a virgin as he had sex with a girl on one of his USO tours. This led to fans immediately believing that the person Cap lost his virginity with was Peter Quill’s grandmother.

Originally, Laura Jane Haddock appeared in Captain America: The First Avenger (2009) and then, later on, appeared in the MCU as Peter Quill’s Mother, Meredith Quill. This led to James Gunn confirming that Haddock played both Peter’s mom and grandma.

With that in mind, fans immediately began to share their thoughts online about this new theory on who Captain America had sex with:

So is it canon that Captain America had sex with Peter Quills Mom or grandma?

I knew it Steve did sleep with Autograph seeker girl (played by Laura Haddock who later played Meredith Quill) during USO 1943 tour they gave each other that look.

I knew it Steve did sleep with Autograph seeker girl (played by Laura Haddock who later played Meredith Quill) during USO 1943 tour they gave each other that look. @MarkRuffalo@ChrisEvans @JamesGunn#SheHulk pic.twitter.com/lse3ZzQCtr

One fan immediately asks if Captain America is Peter’s Grandfather — which isn’t possible due to fans already meeting him in the MCU:

So is Peter Quills grandpa captain America ? The actress that plays his mom was one of the dancers for cap in the first avengers, we now know he lost his virginity to one of those dancers, and we never learned what that hidden Easter egg is from Gotg.

More fans continued to share how Captain America’s love life was finally discussed. While this wasn’t a topic of interest before She-Hulk, a clip from last week caused fans to talk more about whether or not Steve was a virgin before settling down with Peggy Carter.

Now, several fans share the enthusiasm that Jennifer Walters did when they learned the news:

Even Chris Evans shared his thoughts on the new revelation:

She-Hulk promises to include many more connections to the MCU as Jennifer Walters figures out her life as a Hulk which will be entertaining to watch as the series continues to include more characters like Charlie Cox’s Daredevil and Benedict Wong as the Sorcerer Supreme.

How do you feel about this new revelation with Captain America? Let us know what you think!