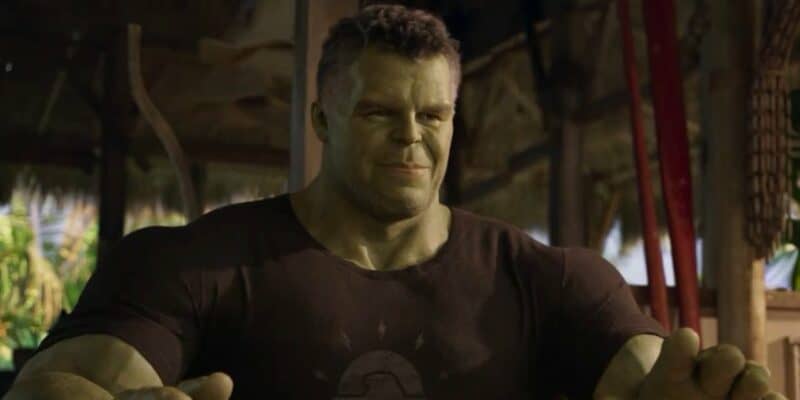 ***SPOILERS FOR SHE-HULK: ATTORNEY AT LAW***

She-Hulk: Attorney at Law‘s first episode focused less on Jennifer Walters being a lawyer and more on how she got her powers.

This allowed fans to get a lot of time with Mark Ruffalo’s Bruce Banner and also learn some dying questions about why Bruce has been a human and Professor Hulk. In Shang Chi and the Legend of the Ten Rings (2021), the post-credit scene included Banner with a sling leaving fans confused about why this could happen.

Then fans saw him appear in the trailer for She-Hulk as Professor Hulk, which was also confusing. Episode 1 helped clarify that Bruce could only be in human form when he wore a new device he created. He did this to heal his arm from the snap he did with the Infinity Gauntlet in Avengers: Endgame (2019).

With Jennifer Walters getting her powers, fans understood that Professor Hulk took years to control, and it was only because Bruce had a friend like Robert Downey Jr.’s Tony Stark to help him. Fans learn that Bruce got his remote beach research facility from Tony as the two worked together for a little while after the Blip.

Hulk learned to merge both of his personalities, and the two spent a lot of time together. While Jennifer Walters is more focused on learning whether or not Stever Rogers died a virgin, Bruce also shared how Tony and he would drink together and talk about their team.

Bruce admitted that he had to hear Tony ramble on about Steve tearing apart the Avengers, which makes sense since Captain America: Civil War (2016) did leave the team in a bad spot which didn’t help Earth once Thanos wanted the Infinity Stones.

Seeing that the two of them were close friends after the Blip is encouraging as that meant Tony didn’t completely leave everything behind after the Avengers lost to Thanos. If anything, fans should expect to learn more about what Tony did with Banner in that time since Bruce will return several more times in the series.

Do you like how She-Hulk explores what happened to Tony Stark during the Blip? Let us know what you think!