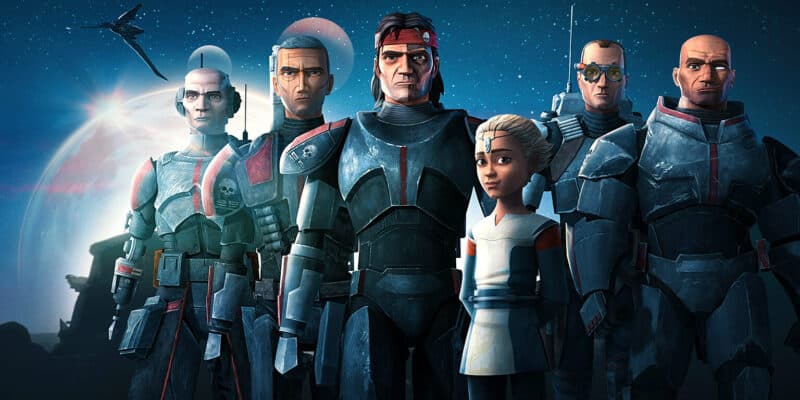 It has been over a year since Lucasfilm announced the second season of the beloved animated television series, Star Wars: The Bad Batch.

Fans have been anticipating the return of Clone Force 99 to the galaxy far, far away but once again it seems The Walt Disney Company has delayed the follow-up to Star Wars: The Clone Wars.

The series expanded Star Wars‘ footprint on the time before the Death Star, the end of the Clone War, and the events of George Lucas’s original trilogy, cementing itself in the realm of the burgeoning Galactic Empire, something later explored in Ewan McGregor’s Obi-Wan Kenobi series, and the future seasons of Star Wars: Andor from creator Tony Gilroy (Rogue One: A Star Wars Story).

After losing Crosshair to the Empire’s regime, the Bad Batch became the surrogate guardians of fellow Jango Fett clone, and Boba Fett’s sister, Omega (Michelle Ang). The lone wolf and cub trope has been a pertinent part of the Star Wars franchise for many years, heightened by the arrival of Pedro Pascal’s Mandalorian Din Djarin and The Child, Grogu (“Baby Yoda”) in The Mandalorian, and it was not amiss here.

As the series developed Omega’s connection with the squad, especially Hunter and Wrecker, it became the emotional cornerstone of The Bad Batch, and after attacks from bounty hunters like the mercenary Fennec Shand (Ming-Na Wen) and Cad Bane (Corey Burton) left audiences rooting for the characters as the 16-episode season progressed.

The Bad Batch ended with the tragic destruction of Kamino’s Tipoca City, 19 years after its debut in Star Wars: Episode II — Attack of the Clones (2002), and also with the canon debut of Mount Tantiss — a part of Legends lore directly linked to both Grand Admiral Thrawn and the Emperor’s cloning facilities — after the Empire accosts Nala Se (Gwendoline Neo). Clearly, Star Wars wants fans to return to the series, and for the last year, its arrival has been highly-anticipated. The trailer even showcased the beloved Commander Cody making his return, following in the footsteps of Captain Rex in Season 1.

After already having one delay, The Walt Disney Company finally revealed that The Bad Batch Season 2 would be released on September 28, however, a recent update from Disney+ has stunted that seemingly confirmed expectation. Amongst the release dates of Marvel Studios’ Thor: Love and Thunder (2022), and the behind-the-scenes feature, Obi-Wan Kenobi: A Jedi’s Return on Disney+, the listing for September 28 had no mention of the fan-favorite Star Wars animated series. In fact, the series was nowhere to be found, despite such a large focus on the final day at Star Wars Celebration Anaheim 2022.

In looking deeper, the removal of Star Wars: The Bad Batch from the release schedule could be in direct relation to the reason behind Marvel shifting its She-Hulk: Attorney at Law release day to an unchartered Thursday spot. While it wasn’t confirmed, many believe the shift came down to Lucasfilm’s upcoming Andor release which will debut an unprecedented three episodes on Wednesday, September 21, clashing with She-Hulk‘s own schedule.

Previously, Ms. Marvel‘s viewership plummeted during its run, largely due to the same-day release of Deborah Chow’s Star Wars universe series Obi-Wan Kenobi, therefore the scrapping of The Bad Batch from the schedule could be because it will clash with Lucasfilm’s live-action Andor.

Hopefully, Star Wars fans will have an update, or clarity on whether The Bad Batch will even debut in 2022, soon.

The Bad Batch is developed by Dave Filoni and Jennifer Corbett, with Brad Rau serving as supervising director.

What do you think is happening with The Bad Batch? Let us know in the comments down below!