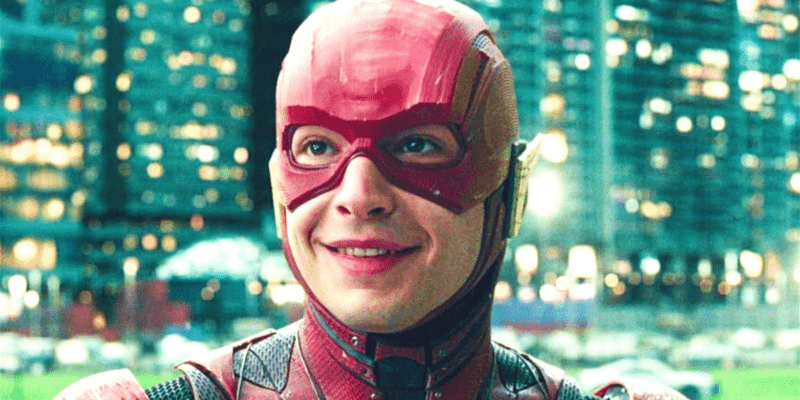 Justice League (2021) actor Ezra Miller has been entangled with controversy after controversy, most recently being on the run from U.S. Law enforcement. Now, the actor has randomly appeared in a supermarket and threatened to knock out a fan.

Actor Ezra Miller may be making headlines, getting wound up in a string of arrests, and having their Hollywood career fall apart, but Warner Bros. is going ahead with releasing the actor’s solo The Flash (2023) film next year.

The world of Ezra Miller has been in the public eye since the Fantastic Beasts actor was arrested in Hawaii for reportedly assaulting bar guests partaking in karaoke. From there, Miller has recently gripped the world of superhero fans after reports of the actor “grooming” an 18-year-old girl.

As a result, Ezra Miller has been given a restraining order after reportedly giving the young adult drugs and alcohol, assaulting various individuals, and keeping a family on their remote Vermont farm.

Now, the actor has been found in a random supermarket in an undisclosed location in the height of their turmoils and social media frenzies.

In a TikTok video, the actor lightly suggests that they can “knock you out,” referring to the young, nervous fan asking Miller for a photo:

You cannot possibly guess who’s gonna show up in this video.

You cannot possibly guess who’s gonna show up in this video. pic.twitter.com/IBwXxaII2Z

Various reports suggest that the above video is potentially two years old. While these claims cannot be verified, please take this information lightly.

“It’s an option I present people, always. I can always just knock you out and then you won’t have to panic. You just let me know. No? Yes?

In a whirlwind of news, GQ writes:

Miller has been racking up arrests and dubious incidents across different islands in Hawaii for the last couple of months, but the story has taken a darker turn in recent weeks. On June 23, Rolling Stone published an extensive piece revealing that a young mother and her children (all between ages one and five) are currently staying with Miller on their 96-acre Vermont farm. The woman told Rolling Stone that she’s found the home to be “a healing haven for us” after leaving an abusive relationship.

But two unnamed sources who spoke to Rolling Stone said that adults on the property have been farming marijuana and smoking it around the children, despite not being legally allowed to do so, per Vermont’s Cannabis Control Board. The sources also said that there is a sizable number of firearms around the house, including assault weapons.

In wake of various reports suggesting that U.S. law enforcement is actively searching for Ezra Miller and 18-year-old Tokata Iron Eyes, who has been reportedly “groomed” by the Credence Barebone actor, Miller posted various photos on social media mocking those attempting to find the star.

Now, in the above video, it’s unclear whether or not Ezra Miller is jokingly offering to punch his young fan or being completely serious. With a July 12th court date set with the parents of Tokata Iron Eyes to issue a restraining order against Miller, it’s unclear if The Perk of Being a Wallflower (2012) star will appear.

Given that Fantastic Beasts: The Secrets of Dumbledore, unfortunately, fell off the public radar relatively quick — Miller’s latest project — and with reports that the mantle of the Flash is going to a different actor, it’s a surprise that out of all given times, Warner Bros. would go ahead and choose to make Zack Snyder’s Justice League even more available than before.

Undoubtedly highly centered around Barry Allen, it’s unknown why Warner Bros. would go ahead over a year later, during the height of Ezra Miller’s controversies, to re-release the star’s most famous movie. With rumors that DC is set to replace Miller’s Flash character altogether, having Warner Bros. re-releasing the actor’s defining movie marks uncertainty in the studio’s future decision on Miller’s The Flash (2023) solo film.

With reports that Zack Snyder’s Bruce Wayne/Caped Crusader (Ben Affleck) was going to be retconned by Michael Keaton’s Batman in The Flash, it’s now possible that Ezra Miller’s own character could be rebooted in the upcoming motion picture.

More about the Justice League

Ray Fisher called out the mistreatment, and DC reportedly responded by sidelining his character in future projects, including The Flash (2022) and Peacemaker.