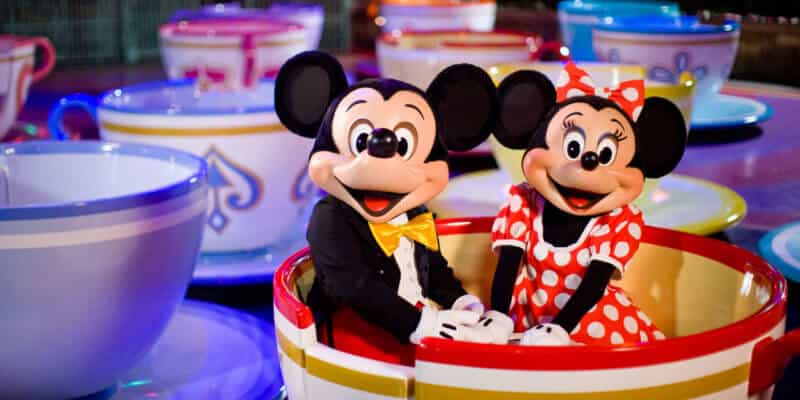 There are certain Disney Parks rides that are more iconic than others — these generally appear at multiple theme parks around the world and often have something of a cult following in the Disney fan community. Among these rides are “it’s a small world,” Jungle Cruise, Pirates of the Caribbean, and the Mad Tea Party (colloquially referred to as the “tea cup ride” or simply “tea cups”).

Iterations of the Mad Tea Party — though some with slightly different names — can be found at five of the six Disney theme park properties worldwide. All of the rides, though, are inspired by Mad Hatter’s unbirthday scene in Walt Disney’s Alice In Wonderland (1951).

Here, you will learn more about the unique histories of each version, whether or not you’ve ridden them all for yourself!

The original Mad Tea Party was an “opening day attraction” at Disneyland Resort in 1955. Walt Disney himself was, of course, involved in the development of the Alice In Wonderland-themed ride, which was manufactured by Arrow Development.

The ride — as is true for most Disney rides — went through numerous iterations before it became what it is today. A brief history of the first version of the teacups notes:

Several concepts for the Mad Tea Party were originally much more outrageous compared to today’s version. One drawing showed the Mad Hatter’s dinner table featured in the center of the ride with various lanterns and decorations all around. Another drawing showed 20 teacups circling a central hub, making it similar to a racetrack with banked curves.

For the first few months after the ride first opened, the tea cups spun on a bare platform before it was painted with the psychedelic spiral that exists today. Also, during the ride’s first two years, the tea cups had no brakes or clutches; nothing limited how fast they could be spun.

The attraction’s original location was directly behind King Arthur Carrousel and Sleeping Beauty Castle. It was given slight modifications in 1972 with ornamental arches connecting the light posts, and again in 1978 with the platform and teacups being repainted. In 1983, the whole attraction was completely remodeled and relocated to its present location near Matterhorn Bobsleds. It also incorporated a few ideas from the original concepts, such as colorful lanterns.

In 2004, the attraction was modified to make it more difficult to spin fast after a disabled rider lost his balance and slipped from a teacup. Like other remaining 1955 attractions, one of Disneyland’s teacups was painted gold in honor of the park’s 50th anniversary in 2005.

Related: Disney Fans Continue To Try and Save Splash Mountain With Petition

Take a Twirl in a Teacup
Celebrate your unbirthday with a wild whirl through Wonderland. Madcap music fills the air as you rotate below a canopy of colorful lanterns.

It’s an exuberant swirl-a-bration—and you’re the Guest of honor!

Walt Disney World Resort’s Mad Tea Party can be found in Magic Kingdom Park’s Fantasyland area. The ride has undergone some changes over the years, as noted below:

Like Disneyland, Magic Kingdom’s original 1971 version of this attraction opened without a roof. It was eventually added in 1973 (along with the central teapot) due to extreme weather conditions. It was updated in 1992 with a new color scheme, new music, and the colorful lanterns. In 2010, the canopy was repainted.

A Very Merry UnBirthday
Pour yourself into an oversized pastel teacup and twirl through a wild wonderland of color and song. As the party gets underway, sail back and forth around a towering teapot as festive music fills the air.

A Taste of Classic Disney Magic
Mad Tea Party is inspired by the Mad Hatter’s party sequence in Walt Disney’s animated classic Alice in Wonderland and modeled after the iconic 1955 Disneyland Park attraction.

Control Your Spin
For a wild ride, turn the wheel fast and hold on. Dizziness not your cup of tea? Turn slowly, or not at all, and enjoy a gentle turn around the table.

The Disneyland Paris teacup ride is called Mad Hatter’s Tea Cups. It is a unique version of the ride, featuring a glass domed enclosure [above]. This version of the ride influenced the designs used at both Tokyo Disney Resort and Hong Kong Disneyland, as you can read more about below:

The Paris version of the attraction is the only version to feature a petal-shaped glass roof and surrounding gardens. It also uses the Dormouse’s teapot outside the ride, near the March Hare’s Refreshments. The teacup designs were later used for Tokyo Disneyland and Hong Kong Disneyland’s teacups.

Skip to Wonderland and board a colourful teacup for a merry mad spin around a giant teapot.

Mad Hatter’s Tea Cups: don’t be late for this very important date!
Every day is a very merry unbirthday for the Mad Hatter. And he’s invited you to pour yourself into one of his oversized teacups for a whimsical whirl accompanied by festive music.

Influenced by a combination of the design at Disneyland Paris’s Disneyland Park and the original Disneyland Resort ride in Southern California, Hong Kong Disneyland’s Mad Hatter Tea Cups opened in 1992. It remains largely the same as it did on opening day, and endured three closures during the COVID-19 pandemic due to China’s strict regulations for theme parks and other public gathering places.

Spin ‘round and ‘round in a giant teacup that you control during a madcap music-filled adventure.

Take a Teacup for a Twirl
Pour yourself into an oversized pastel teacup and rotate madly amid a menagerie of color and sound. Celebrate your “un-birthday” in Wonderland as you glide and spin back and forth beneath a windswept canopy of nearly 50 paper lanterns, as festive music from Disney’s Alice in Wonderland fills the air.

The Tea Cups
Each teacup holds up to 4 Guests—there are 18 decorative cups in all. As the fun begins, the cups swirl atop 3 separate turntables, which are mounted on one large turntable. It’s a crazy kind of contraption you’d half expect to find somewhere in Wonderland!

When the teacup ride opened at Tokyo Disney Resort’s Disneyland Park on September 12, 2005, it was named “Alice’s Tea Party,” which was a new take on the classic Disney attraction — it is also the newest version of the ride to open.

Sit down in a colorful teacup and turn the wheel in the center to change the speed and direction that the cup whirls. Look for the Dormouse peeking out at you from the huge teapot in the center of the attraction.

A video of the ride in action can be viewed below:

The only Disney Park that does not currently have a version of the tea cup ride is Shanghai Disneyland. This Park is unique in several ways. It’s castle, the Enchanted Storybook Castle, takes cues from all Disney Princesses and is not based on the traditional Sleeping Beauty Castle or Cinderella Castle design.

Furthermore, Shanghai is the only Park to not have Disney’s standard Main Street, U.S.A. area. Instead, it has a section known as “Mickey Avenue.”

Which Disney tea cup ride is your favorite?