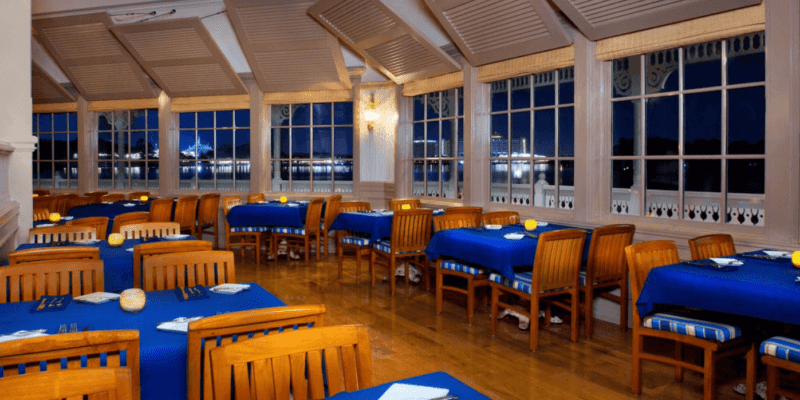 Recently, Disney’s Grand Floridian Resort & Spa has been the subject of much chatter in the Disney fan community.

The Grand Floridian is currently in the midst of a divisive multi-year revamp that some Walt Disney World Resort Guests are afraid will leave the Resort “sterilized” and devoid of the Victorian Era charm it currently possesses.

One article noted that sitting Walt Disney Company CEO Bob Chapek is pushing for the ongoing retheme, as he doesn’t feel the Disney Deluxe Resort is up to snuff with other nearby properties, such as the Four Seasons:

Furthermore, high-end AAA Five Diamond-rated restaurant Victoria and Albert’s is set to reopen with a reimagined design and a new menu.

Now, a new construction permit indicates that changes are also likely coming to Guest-favorite Grand Floridian restaurant, Narcooosee’s. The permit in question is for “general construction,” which can mean anything from minor updates to a complete overhaul.

The contractor listed on the work permit is Balfour Beatty. The company’s official website notes that the company is passionate about innovation, just like Disney is:

At Balfour Beatty, we understand that time doesn’t stand still, and neither do technologies. Our passion for innovation leads us to explore emerging tools that equip our people and partners to solve the challenges of today’s projects. From lasers to drones, virtual reality and more, we are always on the watch for the newest and best solutions that help meet our clients’ cost and schedule needs. When you partner with Balfour Beatty, you are partnering with a pioneer whose projects will stand the test of time.

Disney has not officially confirmed what changes will be made to Narcoossee’s, but it is known that the popular dining establishment will be closing to Guests on June 18, 2022, with no reopening date announced.

This means the changes will likely be significant.

Narcoossee’s is officially described as:

Coastal Cuisine
Delight in superb seafood, steak and more in this waterfront hideaway. Narcoossee’s serves a spectacular, innovative selection of fresh seafood from both local waters and around the globe.

For land-based fare, savor options like grass-fed filet mignon and the Black Angus New York strip. Or, enjoy the best of both worlds with a surf-and-turf dish that features sirloin steak and a lobster tail.

And for a perfect ending to any feast, treat yourself to such sumptuous desserts as the chocolate torte and the almond-crusted cheesecake with Lambert cherry sauce.

Are you excited to see how Disney changes Narcoossee’s to align with the Grand Floridian’s new look?