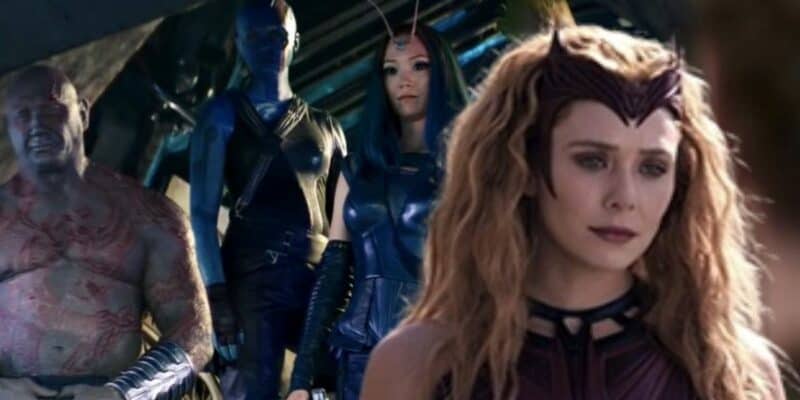 Doctor Strange in the Multiverse of Madness is currently raking in the big bucks for Marvel Studios at the Box Office. Director Sam Raimi brought his horror film touch to the Marvel Cinematic in Doctor Strange 2, which stars Benedict Cumberbatch as Doctor Stephen Strange, Elizabeth Olsen as Wanda Maximoff/Scarlet Witch, and Xochitl Gomez as America Chavez/Miss America.

It will be some time until fans know what the future holds for these characters. So, for now, they are looking at the next Marvel release Thor: Love and Thunder (July 8, 2022), starring Chris Hemsworth as Thor, Natalie Portman as Jane Foster/The Mighty Thor, Tessa Thompson as King Valkyrie, and Christian Bale as Gorr the God Butcher.

Thor 4 will also feature the Guardians of the Galaxy, who will return in Guardians of the Galaxy Vol. 3 on May 5, 2023, which just wrapped production in Atlanta, Georgia. Atlanta Filming posted some behind-the-scenes photos, including those of a police car with an alien language.  And Cosmic Circus translated some of the text, revealing that they read “Counter Earth” – a significant location from Marvel Comics with direct ties to a major character – the High Evolutionary.

Who is the High Evolutionary?

The High Evolutionary/ Herbert Edgar Wyndham first appeared in Thor #134 (1966) by Stan Lee and Jack Kirby. The High Evolutions is obsessed with genetic experimentation. Some of these experiments took place on Mount Wundagore, a location Marvel fans who have seen Doctor Strange in the Multiverse of Madness (2022) are now familiar with.

In Marvel Comics, Mount Wundagore is the birthplace of the Maximoff twins, Wanda Maximoff/Scarlet Witch and Pietro Maximoff/Quicksilver. The Darkhold was brought to Mount Wundagore when Gregor Russoff tried to use it to cure his lycanthropy, accidentally freeing Chthon while a pregnant woman named Magda gave birth.

Related: “#GoodbyeDrax,” Marvel Actor Officially Retires, “End of a Journey” for ‘Guardians of the Galaxy’

What does the High Evolutionary do?

After battling Thor and Bruce Banner/Hulk, the High Evolutionary launched his citadel on Mount Wundagore into space. There, Wyndham temporarily evolved himself into a disembodied intelligence. He later devolved himself back into his normal form but now had internalized his powers, including the ability to evolve or devolve other creatures at will.

His other powers include:

“The High Evolutionary was exposed to his Evolutionary Accelerator machine, giving him superhuman abilities by accelerating his personal evolution. The Evolutionary has shifted between various levels of evolution over the years, sometimes deliberately sometimes not, with different power levels as well. Often he maintains some level of superhuman power while incorporating the Evolutionary Accelerator machine into his armor, letting him evolve himself further at will. The unstable Isotope E caused the High Evolutionary to uncontrollably fluctuate between God-like powers and Neanderthal-level ability and intelligence.”

The Avengers battled him during the Evolutionary War, which ended with him becoming more than a god and evolving out of existence.

Counter-Earth was first introduced in Marvel Premiere #1 1972) by Roy Thomas and Gil Kane. It is based on the Ancient Greek myth attributed to pre-Socratic Greek philosopher Philolaus (c. 470 – c. 385 BC). The basic idea is adapted directly in Marvel Comics. A second Earth orbits the sun at the same distance and speed as Earth. But It can never be seen because the Sun always blocks the view.

There have been multiple versions of the Counter-Earth in Marvel Comics. The High Evolutionary created the first version to be a better version of Earth. Counter-Earth turned out to be a lot like the original, except that there were no superheroes.

“Dismayed, the High Evolutionary sent [Adam] Warlock to his world to straighten it out. The High Evolutionary placed Counter-Earth a micro-second out of dimensional sync to hide it from Earth. Counter Earth was eventually stolen by the alien Sphinxor, on the orders of a fantastically powerful alien race called the Beyonders, who placed it in a museum. When fighting against They, Warlock discovered that Thanos had destroyed Counter-Earth while in possession of the Infinity Gauntlet.”

The Counter-Earth would later return and become the home of the New Men, an artificial race of mutagenically altered, human-size animals created by the High Evolutionary to possess human-equivalent minds and consciousness.

How does Adam Warlock fit in?

Adam Warlock was first introduced in Fantastic Four #66 (1967) by Stan Lee and Jack Kirby. While he is the result of genetic experimentation, it was not at the hands of the High Evolutionary. Warlock was created by a group of researchers who called themselves the “Enclave” and was initially called “Him.”

Thor killed him after trying to kidnap Lady Sif. He was later reborn and adopted by the High Evolutionary. It was then that he got the name Warlock. He gave Warlock the purpose of being the first and only superhero on Counter-Earth.

Adam Warlock’s MCU origin is already different from his comic book origin. He was first teased in the mid-credits scene of Guardians of the Galaxy Vol 2. (2017). After the Sovereign was betrayed by the Guardians of the Galax when Rocket Racoon (Bradley Cooper) stole their Anulax batteries, Ayesha hunted them down. Following the battle against Ego, the Sovereign lost their entire fleet of Omnicrafts.

Ayesha created a new advanced Birth Pod and called the new being “Adam.” Will Porter will play Adam Warlock in live-action in Guardians of the Galaxy Vol. 3, and rumors suggest Chukwudi Iwuji will play the High Evolutionary. It is unclear if director James Gunn will reference the High Evolutionary comic book connection to the Scarlet Witch.

More on Guardians of the Galaxy Vol. 3

Marvel’s band of misfits may be disbanding in their third outing. Marvels have speculated that either Rocket Raccoon or Drax the Destroyer (Dave Bautista) could be killed in this film. The cast also includes Chris Pratt as Peter Quill/Star-Lord, Zoe Saldana as Gamora, Karen Gillen as Nebula, Pom Klementieff as Mantis, and Vin Diesel as Groot.

Let us know in the comments if you cannot wait to see Guardians of the Galaxy Vol. 3.