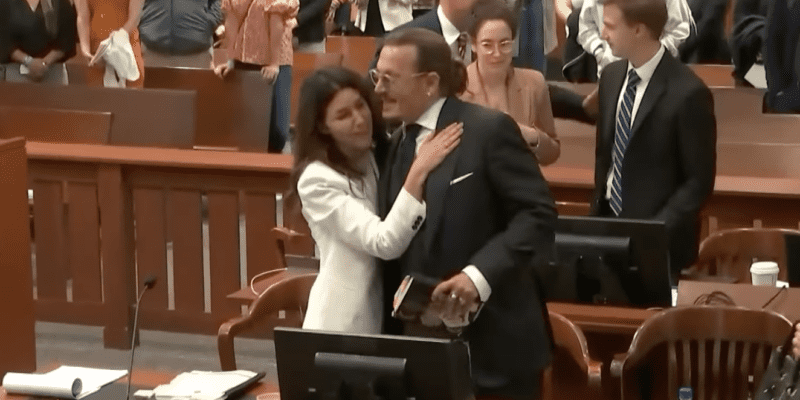 Johnny Depp has always been a heartthrob, ever since he stepped on the scene in 21 Jump Street. He was famously known for dating co-star and actress Winona Ryder. Depp also shares children with long-time partner Vanessa Paradis. Although his list of girlfriends isn’t necessarily short, many have been speculating for weeks that another woman is now in the mix — and she was all giggles when asked about her relationship with Depp.

At the moment, Johnny Depp, 58, (Pirates of the Caribbean, Alice in Wonderland, Edward Scissorhands)  is on trial with ex-wife Amber Heard (Aquaman, The Rum Diary). The trial has been ongoing for weeks, with every single day being broadcasted to the public. YouTube live streams have hundreds of thousands of people watching every day, as Depp and Heard’s complicated relationship that led to their 2016 divorce.

The allegations that Depp abused his former wife quickly became a claim that everyone wanted to know more about. Depp continues to state that Heard’s allegations are false, and he has not been proven guilty by any court of law. The two are currently in Fairfax, Virginia fighting over a $50 million defamation lawsuit, where Amber Heard is on the stand, being cross-examined by Camille Vasquez, 38, who is being praised by many for her strong questioning against Heard.

Weeks ago, we wrote that there was speculation that Camille Vasquez and Johnny Depp were an item. It was interactions, such as the one below posted by Anthony Buchanan (@anthonyscountry) that had many wondering if the two were a little too friendly. In the video below, you can see that Camille made sure to say goodbye to Depp by grabbing his hand.

Mmmm…. is Johnny Depp actually dating his own attorney in the courtroom? 👀👀👀

Mmmm…. is Johnny Depp actually dating his own attorney in the courtroom? 👀👀👀#IStandWithJohnnyDepp #JusticeForJohnnyDepp pic.twitter.com/T5I0fQDIXB

Of course, having a strong relationship with his legal team is very normal and to be expected, but the rumors have now only continued to grow. To read more on all of the speculation leading up to now, click here.

Inside Edition recently put a video out on YouTube questioning the speculations that Depp and Vasquez were an item. In the video, the creators highlight the proximity in which Depp and Vasquez have when discussing things in the courtroom, as well as the hug that they shared after a completed day of cross-examining Ms. Heard.

They then share some newer footage of Depp’s attorney leaving court. While walking out, Vasquez was all smiles. She was then confronted and asked if she is dating Johnny Depp, to which she refused to comment but let out a laugh. Some are now taking her silence as possible conformation of the pair; however, the laughter may have also indicated the complete opposite.

It seems that for now, the relationship status of Depp and Vasquez has only been confirmed as professional, but there is still a possibility that more may be going on with the two. If the latter is true, we will likely not know until after the trial has concluded.

More on Depp vs. Heard

Depp’s career has taken a large dip due to the court case and the rippling effects that Heard’s allegations have caused. After U.K. tabloid The Sun wrote an article defaming Depp while calling him abusive, Depp sued the publication. The actor lost the battle with the tabloid as well as his appeal. Shortly after, Depp would lose two major roles.

Disney has dropped Johnny Depp as the loveable Jack Sparrow in the Pirates of the Caribbean films, which has set fans off in outrage. He also lost his Warner Bros. role in the Fantastic Beasts franchise. Since then, Depp has said that Hollywood has “boycotted” him, and now, Depp is continuing to speak out on his protestations about his ongoing situation. We have recently discussed that Robert Downey Jr. (Iron Man) has been reportedly fighting to save Depp’s career. Read more here.

After losing to The Sun in a libel lawsuit case in November 2021, Depp has gone back to court for a defamation case, claiming that Heard isn’t telling the truth and has ruined his career. Now fans watch the court case ensue as it continues right now in Fairfax, Virginia.

As we have noted, the ongoing court case and accusations made by Heard have dramatically hurt Depp’s career. Johnny Depp’s film Minamata, produced by MGM, recently debuted but only after being pulled from the festival circuit.

Amber Heard has been caught lying and changing her testimony while under oath and may now face jail time.

What do you think of the relationship between Depp and his attorney?