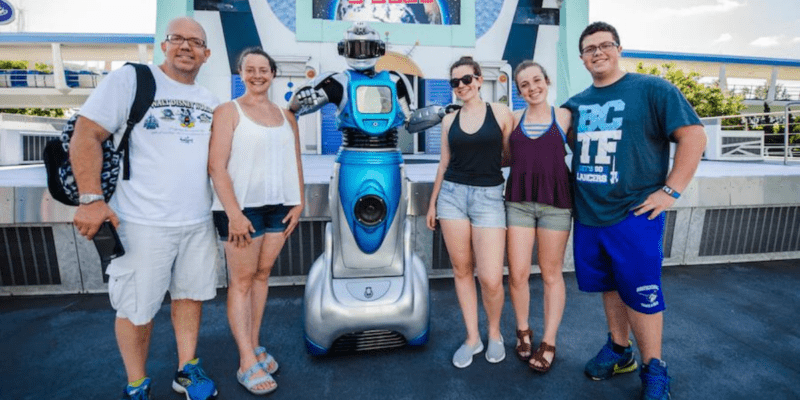 There aren’t many things more exciting to talk about than the brand-new roller coaster opening in Walt Disney World this month. Located in EPCOT, the Orlando theme Park will be the home to the company’s newest Marvel-centric attraction known as Guardians of the Galaxy: Cosmic Rewind. However, one surprise character interaction recently rose to the challenge of competing with this monstrous new attraction.

We’re talking about iCan, who made his debut at EPCOT on May 27th, competing with the grand opening of Guardians of the Galaxy: Cosmic Rewind. iCan is an interactive humanoid robot that made daily appearances in Tomorrowland at Magic Kingdom between 2017 and 2018. iCan replaced a fan-favorite interaction, Push the Trashcan, who last appeared in Tomorrowland in 2014.

However, iCan was removed from the Park and, like many things, didn’t return after Parks reopened after the Covid-19 pandemic. That is until now. Guests visiting EPCOT yesterday were able to meet and interact with this hilarious character. Disney Parks (@disneyparks) posted a video on TikTok announcing the return of this beloved character to his new home.

It is not clear if the return of iCan was planned to accompany the grand opening of Guardians of the Galaxy: Cosmic Rewind or if this sighting was more of an improvised strategy to comfort Guests who were not able to experience this new roller coaster on opening day.

Related: Thousands of Guests Unable to Experience Guardians of the Galaxy: Cosmic Rewind on Opening Day

Either way, many fans were happy to see iCan and his familiar metallic face back at the Parks, and many more were so glad to meet him for the first time.

Did you know of iCan? Have you had the chance to talk to him? Let us know in the comments below!