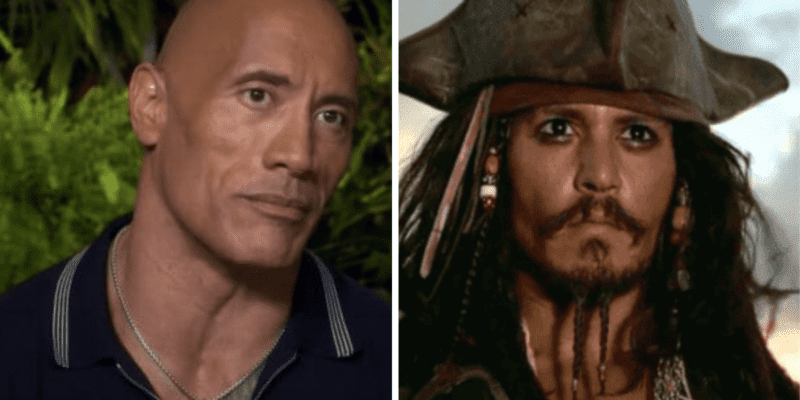 There are few actors who have reached the level of success that has been seen by Dwayne “The Rock” Johnson.

Johnson, who got his full-length feature film beginning in Universal Pictures’  The Mummy Returns (2001) and the subsequent spinoff The Scorpion King (2002) after a successful career as a professional wrestler in the WWE, has become a household name. He is a beloved icon who has transcended into one of the most popular actors in the world.

Now, it seems that the actor may be eyed for another key role in the world of Disney.

Is Dwayne Johnson heading to the Pirates of the Caribbean franchise?

Johnny Depp, who plays the beloved role of Captain Jack Sparrow in the Pirates of the Caribbean franchise, is still in the midst of a court trial with ex-wife Amber Heard. The Walt Disney Company reportedly turned its back on their beloved Captain Jack Sparrow before Johnny Depp could publicly defend his name and Heard’s Op-Ed with The Sun also cost Depp his role in The Fantastic Beasts franchise as Gellert Grindelwald to Mads Mikkelsen.

Despite many fans coming to his defense, Pirates of the Caribbean producer Jerry Bruckheimer officially confirmed this week that a script is being developed with Margot Robbie taking over the lead role. When asked if Captain Jack Sparrow– Johnny Depp’s beloved character– could make a return, he said that there were no plans in the works currently.

Now, a report from Giant Freakin’ Robot indicates that Depp may never return in the role and, instead, Dwayne Johnson may be eyed for the next leading role in a Pirates of the Caribbean spinoff.

“It has already been announced by Jerry Bruckheimer that two spinoffs are in the works. One will see Margot Robbie take the lead of the franchise. The other is currently a mystery for now. However, based on our trusted and proven source, we can report that a third spinoff is in the works. This third Pirates spinoff will star Dwayne Johnson.”

It doesn’t seem that Johnson would play the role of Captain Jack Sparrow, but rather would be a different character introduced in the franchise, similar to what will be seen with Margot Robbie’s spinoff film. It’s unclear if both Johnson and Robbie could star together in the film, but it could make for an interesting dynamic. Both Johnson (Black Adam) and Robbie (Harley Quinn) have become stars in DC Comics movie franchises, which rival Disney’s Marvel Studios.

Dwayne Johnson may be eyed for another iconic Disney role, as well

It’s not just a role in the Pirates of the Caribbean franchise that Dwayne Johnson may be being eyed for by Disney. There are also rumors that he could replace Will Smith in an iconic role, as well.

Smith left fans and fellow actors and actresses stunned after the Oscars incident several weeks ago. After Chris Rock made a joke about Smith’s wife, Jada Pinkett Smith, Will Smith got up from his seat and walked on stage to deliver a slap across the left jaw of Rock. He walked off stage and was visibly yelling at Rock to “keep my wife’s name out your f***in’  mouth.”

Just a matter of minutes after the incident unfolded, Smith won the Oscar for Best Actor in a Leading Role for his portrayal of Richard Williams in King Richard (2021). After receiving much criticism following the event, Smith issued an apology and resigned from the Academy.

The Fresh Prince of Bel-Air star made his Disney debut in Aladdin (2019) and the live-action blockbuster earned over $1 billion at the Hollywood box office. Though Disney has still been using content with Will Smith, it seems there might be a major change to his iconic role as Genie in the upcoming  Aladdin 2project.

A rumor has recently formed that Dwayne Johnson could take over the role as Genie in the sequel. Genie, originally played by Robin Williams in the animated film, has been one of the most beloved characters in the world of Disney for 30 years.

If Johnson were to take on the role of Genie in Aladdin 2, there’s no doubt he could do an excellent job and would bring charisma and a different personality to the role.

Dwayne Johnson got his start with The Walt Disney Company when he signed on to star in the film The Gameplan (2007) alongside child star Madison Pettis. He would also star in Race to Witch Mountain (2009) just two years later before a period of almost a decade would occur without him starring in a Disney film.

Of course, he returned to Disney to be the voice of Maui in the beloved Disney Animations Studios film Moana (2018).

Three thousand years ago, the greatest sailors in the world voyaged across the vast Pacific, discovering the many islands of Oceania. But then, for a millennium, their voyages stopped– and no one knows why. From Walt Disney Animation Studios comes Moana, a sweeping film about an adventurous teenager who sails out on a daring mission to save her people. During her journey, Moana (Auli’i Cravalho)  meets the mighty demigod Maui (Dwayne Johnson), who guides her in her quest to become a master wayfinder. Together, they sail across the open ocean on an action-packed voyage, encountering enormous monsters and impossible odds. Along the way, Moana fulfills the ancient quest of her ancestors and discovers the one thing she’s always sought: Her own identity.  Some flashing lights sequences or patterns may affect photosensitive viewers.

The film was so popular that it spawned its own experience in EPCOT at Walt Disney World Resort, which is currently under construction. In addition, Disney Animation announced that a spinoff TV show featuring the beloved characters would be coming to Disney+ in the future.

Johnson’s most recent role was as Skipper Frank Wolff in the film Jungle Cruise (2021) alongside Emily Blunt (Lily Houghton) and Jack Whitehall (McGregor Houghton). Of course, the movie is an adventure film that stems from the beloved Disneyland Park and Magic Kingdom theme park ride.

The official description for the film reads:

Johnson has been very open about his good relationship with The Walt Disney Company and this was on display just recently when Disney signed a deal to broadcast his new business venture– the XFL– on its networks. During the announcement, Johnson said:

“This is a definitive moment for the XFL and the beginning of an incredible, long-term partnership for the league, building on my longstanding, very successful legacy relationship I’ve had with Disney throughout my career,” Johnson said in a statement.

Johnson purchased the XFL from WWE Chairman Vince McMahon in a $15 million deal back in 2020. His daughter, Simone Johnson, has been attempting to begin a wrestling career, following in the footsteps of her father and grandfather, Rocky Johnson.

Johnson’s relationship with Disney, especially over the last few years, has been one of the major reasons for the rumors that he could take over the iconic roles we talked about above.

Johnson has been very involved in the making of the NBC sitcom Young Rock, which is a comedy that tells his story. It was just recently announced that the popular show would be renewed for a third season.

In addition, Johnson’s highly-anticipated DC debut Black Adam (2022) will hit theaters in just a matter of months on October 21, 2022.

The official description for the Warner Bros film reads:

Nearly 5,000 years after he was bestowed with the almighty powers of the Egyptian gods—and imprisoned just as quickly—Black Adam (Johnson) is freed from his earthly tomb, ready to unleash his unique form of justice on the modern world.

Johnson will also be the voice of Krypto the Super-Dog in the Warner Bros. Pictures animated film DC League of Super-Pets (2022). The movie is set to release in July 2022 and will pair Johnson with Keanu Reeves (Batman) and familiar co-star Kevin Hart.

Johnson and Hart have had quite the run of films as of late. The two actors have shown a hilarious dynamic starring alongside each other in four films in the last several years, including Fast & Furious presents: Hobbs & Shaw (2019), Jumanji: Welcome to the Jungle (2017), Jumanji: The Next Level (2019), and Central Intelligence (2016).

More projects expected to release in the future with Johnson include Red One, Jungle Cruise 2, Journey 3, Black Adam 2, and Young Rock Season 3.

At this point, The Rock reportedly has no movie obligations during the first portion of 2023. This has led many to speculate that he may be returning to his roots to have one final match in the WWE. Johnson has been rumored for several years to be returning for a WrestleMania match against his cousin Roman Reigns, which could be why he has left his calendar open for the first several months of 2023 at this point.

What do you think of Dwayne Johnson potentially being a part of the Pirates of the Caribbean franchise? Let us know in the comments!