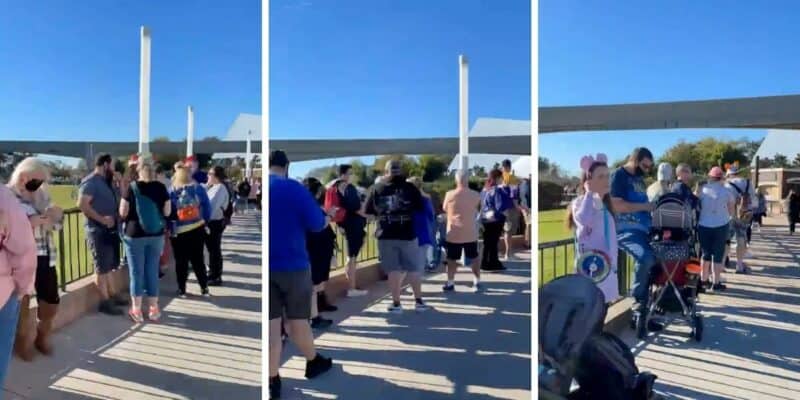 The Walt Disney World Resort in Orlando, Central Florida is one of the most popular and visited theme park destinations in the world. Even after the unprecedented effects of the global pandemic, the Disney Resort, and Florida, have posted impressive visitation and tourism numbers — the latest Disney Parks total revenue for the last quarter was $6 billion+.

With massive crowds come massive queues, and not just for attractions — Guests have Disney Genie and Lightning Lane to combat those — but also for rare and celebratory merchandise. The biggest craze in recent times was none other than the purple dragon himself, the Figment Popcorn Bucket.

Figment has been a staple character at Walt Disney World Resort, having been the mascot of the Imagination! pavilion in the former Future World West. Future World may have been reimagined as new neighborhoods (World Discovery, World Celebration, and World Nature) to fit cohesively with World Showcase, but the small purple dragon is here to stay — a true Disney Parks icon for the ages.

When the Festival of the Arts began at Disney World’s EPCOT Park in January this year, Disney Park Guests went wild for a new merchandise addition. Debuting amid Walt Disney World’s 50th Anniversary Celebrations, AKA The World’s Most Magical Celebration, the Figment Popcorn Bucket drew impressive lines. With queues for the event item stretching to 6+ hours long, many Guests were left disheartened when the Figment Popcorn Bucket unsurprisingly sold out.

The craze saw resellers list the food item on sites like eBay for extortionate amounts while, in a hilarious turn of events, spoof drawings of the popcorn bucket popped up alongside the real listings. For some, though, Disney magic was in the air when one Guest bought multiple buckets only to gift them to others around the Parks.

In a similar vein, Jay Cisco took up the 6-hour popcorn line challenge and waited to grab the exclusive Figment item, only to mail it across the country to a complete stranger.

What made this stakeout unusual was that [Cisco] was not there to buy the popcorn bucket for himself. He was doing a favor for a fellow Disney fan he’d only met online.

Jennifer Siegel, a graduate student and stay-at-home mom from Tulsa, Okla., had posted a message on her Twitter account about a week before the buckets went on sale, saying how desperate she was to get one. “After this, I had a few anonymous Twitter accounts harass me about wanting one,” she said in an interview.

The report goes on to reveal that Siegel had received harassment online from others wanting a Figment Popcorn Bucket for themselves, instead of offering to help:

Not Cisco, who saw the comments on Siegel’s Twitter account and drove the 25 miles from his home to Epcot to stand in line Jan. 14. He popped the bucket in the mail and didn’t ask her to pay for any of it.

“I felt it was the right thing to do,” Cisco said.

The two had interacted through Twitter before — occasional fan chatter.

“I’d never have asked for it. He just did it,” Siegel said.

Disney magic comes in many forms, and Siegel received the best gift from this complete stranger. The article also notes that limited edition merchandise is the “perfect cocktail for capitalism”, giving Guests and diehard Disney fans the chance to collect exclusive merch throughout the year.

It is not just popcorn buckets and little purple dragons that draw the crowds at the Parks, the 50th anniversary event saw fights break out and security called in over the half-centennial merchandise.

What is the longest you have queued for limited edition merchandise? Let us know in the comments down below!