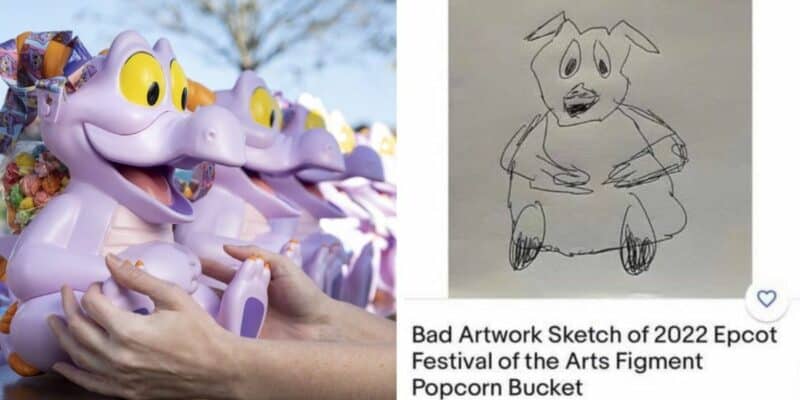 By now, we are sure you have heard about the Figment popcorn bucket craze. On opening day, the line to grab one at the 2022 EPCOT Festival of the Arts was reportedly seven hours long at one point.

As the craze continues, one Disney fan decided to have a bit of fun and sketch the Figment popcorn bucket and list it on eBay — with the money going towards charity!

The sketch (which you can see in a screenshot below) ended up going viral and bids came in by the second. In fact, the listing went from $600 to $10,000 in a matter of seconds, which is when Julia decided to end the listing.

When I put up the auction for the Figment sketch, I had two goals: 1. Give people some joy about a very silly situation involving popcorn buckets. 2. Get a bit of money going to charity.

From all the emails and messages I’ve received, Goal 1 has been accomplished, and I’m so happy that this silly thing brought joy to so many people around the world!

So that leaves Goal 2. Last night, a series of unusual bids came in that pushed the price from $600 to $10,000 in a matter of minutes. It didn’t feel right, so I ended the auction and sent an invoice to the winner.

The winner messaged me to let me know that the bid was placed accidentally by someone else and that they needed to cancel their bid, which they are allowed to do according to ebay rules.

Julia explained that she canceled the bid, which means she can list the item again; however, she does not feel confident in doing so as she is “worried that listing it again in this format will yield the same result.” With this being said, she wants to make sure Habitat for Humanity still gets a good donation and after being reminded by a good friend of a news story about an Andy Warhol sale, Julia had an idea.

If you aren’t familiar with the Andy Warhol sale, someone bought an Andy Warhol sketch and made multiple really good copies of it. They then sold them for a fraction of the price of the real Andy Warhol art, so the purchaser wouldn’t know if they got the real one or a fake copy.

Julia continued to explain in her thread of Tweets:

I’m not quite that creative – and so what I’m going to do is take the original artwork, make 100 photocopies and number them from 1 (the original) and 2-101 (the copies). I’ll be keeping 101, because going 101 feels like an accurate description of this.

The other 100 items will be placed individually in mailing envelopes and sealed. They’ll be shuffled up so I won’t know which one has the real print and which ones have copies.

If all 100 copies are sold, that means Julia would have raised $900 to Habitat for Humanity!

We love seeing how this small act turned into something much bigger. We hope to see Julia raise the money for Habitat for Humanity and want to thank her for spreading kindness and magic.

Will you be purchasing a Figment sketch to raise money for Habitat for Humanity? Let us know in the comments below.