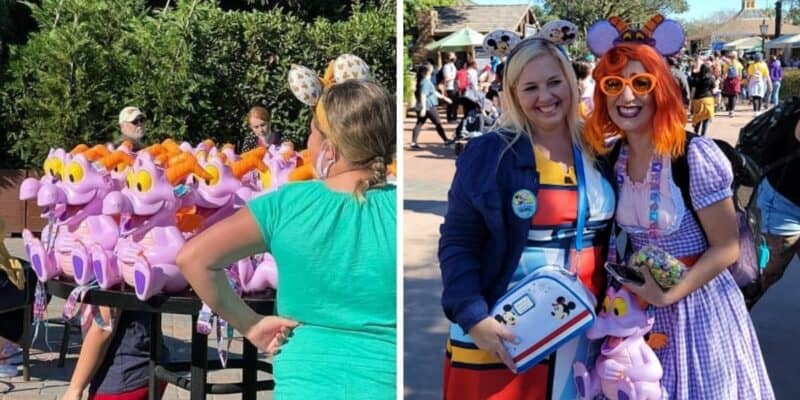 On January 14, the 2022 EPCOT Festival of the Arts kicked off, along with the debut of the highly anticipated Figment popcorn bucket. On opening day, Guests were eager to snag one as the line was, at one point, reportedly seven hours long!

Families from all around the world lined up to try and grab a Figment popcorn bucket to add to their collection, but it didn’t go unnoticed when some families were walking away with multiple buckets, which many assumed were scalpers so they could list them on eBay. However, not everything is as it seems.

There were a handful of families and Guests that bought extra Figment popcorn buckets — not to list them on eBay — but to make some Disney magic for other Guests in the Park!

Many images were going around social media showing Guests with handfuls of popcorn buckets, which as we mentioned before, many assumed were scalpers planning to list the extras on eBay. One photo in particular, which you can see below, was shared to various social media platforms, but this photo is not what it seems.

Brienna Notaro shared to a Facebook group that the people in this photo are her siblings and kindly asked for others to stop sharing it. “The reason we bought so many was so we could go around and give some away to kids around the Park who weren’t able to wait the seven hours and to those at the back of the line in order to spread a little Disney Magic,” Notaro wrote in part.

The family purchased multiple Figment popcorn buckets not just to spread Disney magic to Guests throughout the Park, but for other members of the family back home. She explained how everyone in her family is a big Figment fan, including her “very special Grampa” who has always loved the Disney character and is “in need of a little Disney magic to cheer him up.”

“It just hurts to see so much hate about these buckets, and seeing my families pictures included,” she continued. “We made a lot of peoples day yesterday being able to find some very special folks to give a bucket too, and it was the best part of my trip. I wish everyone trying to get a bucket the best of luck but please leave this photo out of the hate. Thank you.”

Notaro was not the only one whose family purchased extra Figment popcorn buckets to spread Disney magic. Rusty Parker and his wife were visiting EPCOT this weekend and braved the long line to grab a Figment popcorn bucket. Once they got to the front, they purchased an extra bucket, but not so they could sell it on eBay — so they could make someone else’s day a little more magical.

Parker told Inside the Magic that this simple act of kindness came from his wife’s heart and, as they are long time “Disney junkies”, he is so glad to see the magic being spread through the Disney community.

“We had no idea of the ripples of one simple thing my wife did from her heart,” Parker said. The two exchanged first names while at the Park, but ended up getting in contact via social media later on that day. “Tonya (@heyblondieonline) had several friends reached out to her after friends tagging her in the post,” Parker said. “She is very sweet and super talented with her cosplay.”

Parker sent Inside the Magic a video of the interaction, which you can see below. (Grab the tissues!)

You can find this Disney popcorn bucket near Port of Entry at the Pop! Eats stand, while supplies last.

If you are looking to visit the EPCOT festival, Guests can expect to experience culinary delights from Food Studios around World Showcase, the fan-favorite paint-by-number mural, special merchandise, and more! Here is a list of what Guests can expect for the 2022 Festival of the Arts, courtesy of Disney Parks Blog:

The 2022 EPCOT International Festival of the Arts began on January 14 and will run through February 21, 2022. The Figment popcorn buckets will be available while supplies last.

Are you hoping to get a Figment popcorn bucket? Let us know in the comments below.