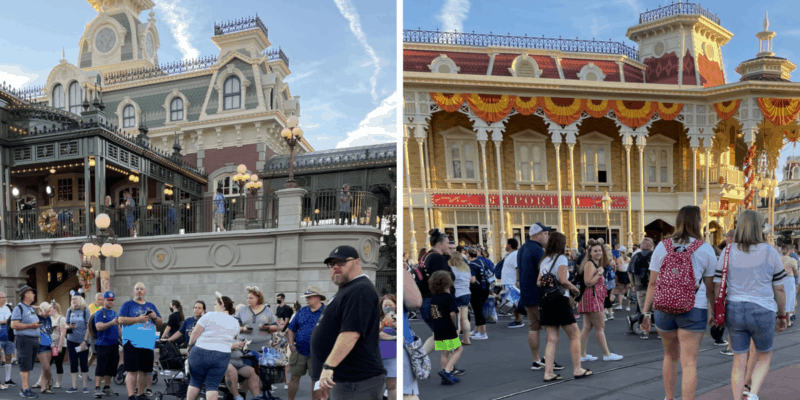 Happy Birthday, Magic Kingdom and Walt Disney World Resort! While Guests are flocking to your gates in massive numbers, it appears that some are all too eager to celebrate. Before 8 a.m. on Friday, October 1, 2021, an altercation broke out in one of Magic Kingdom’s gift shops over merchandise, causing quite an unwanted ruckus. 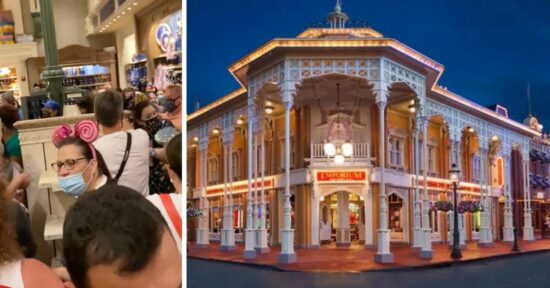 As Magic Kingdom’s 50th anniversary is upon us, the “Most Magical Celebration on Earth” is officially underway. Throngs of excited guests have already passed through the Magic Kingdom touchpoints alone, showing the love, passion and sometimes madness they have for this world-class theme park.

By about 7:30 a.m., Disney Park Guests were making their way through the entrance tunnel to the Fantasy theme park with little trouble. But high on some shopper’s lists was merchandise at Disney’s Main Street Emporium, Magic Kingdom’s main gift shop.

The line stretched all the way past the Main Street train station. There is clearly high demand to shop at the main merchandise location in Magic Kingdom on the morning of the 50th anniversary.

Despite the virtual queue for limited edition merchandise, tense and anxious shoppers clashed inside over drink cups and tumblers, causing angry shouts, snatching cups, and broken shelves, some on the scene report.

A tweet from Jimmy Davis, a marketing expert, shared his disdain for wild shoppers and experience inside the shopping plaza this morning. We agree that order should be maintained, and if you have a question about a piece of merchandise you’ve cast your eye on, simply ask a Cast Member! They are here to help and serve you!

Had to protect the poor cast members putting out cups at the Emporium because crazy old ladies fighting over a stupid cup… poor Ms got trampled and several fights… @waltdisneyworld dropped the ball big big time and put their cast members lives at risk. It’s irresponsible.

Another shopper, and professional pharmacist, “That Disney Nerd,” was shocked and scared by the behavior they witnessed (as described in their Tweet here) inside the Main Street Emporium. While she agrees that the virtual queue was a great idea, it may not have been clear to all shoppers, and that may have led to the problem.

The Disney Lifestylers, who love to share Disney merchandise and new fashions (Twitter user handle @DLifestylers) were caught in the hullabaloo, catching some tense moments in video footage as they attempted to navigate the massive gift shop. They saw already empty shelves, hear the shouts and view the overall uncomfortable, hustling crowd in both of their videos.

Dorky Parks Dad shared a video of the crowds inside the Emporium early this morning, as well.

Merchandise Madness strikes hard today, on Walt Disney World Resort’s 50th anniversary. With extremely long lines everywhere you turn to altercations breaking out over Disney World cups and tumblers, Magic Kingdom Cast Members are trying to combat fears and crowds with all of their tools.

As the morning went on, Cast Members at Magic Kingdom started to manage the madness with different strategies. As the virtual queue went down in the hours after opening, Cast Members started a standby line outside the building. Using the same ropes used during traditional parades, the standby line started reaching from Casey’s Corner towards the main gate.

Looking back up the street, the queue is fairly spaced yet very long. In fact, it was reaching back up to the train station at the time these photos were taken.

If you, your friends, or your family are at Walt Disney World — or, in particular, the Emporium on Main Street, U.S.A., at Magic Kingdom — shopping today for Disney World merchandise, please be kind to Cast Members and other shoppers around you. Supply chain shortages facing the stores are hitting them hard, making supply and demand topple over into what feels like a merchandise scavenger hunt. Know that Disney has ordered lots of merchandise, and it will continue to be put out on the shelves as it arrives. Like Cinderella, use patience, have courage… and be kind!

What piece of 50th Anniversary merchandise are you wanting to collect? Leave a comment below!