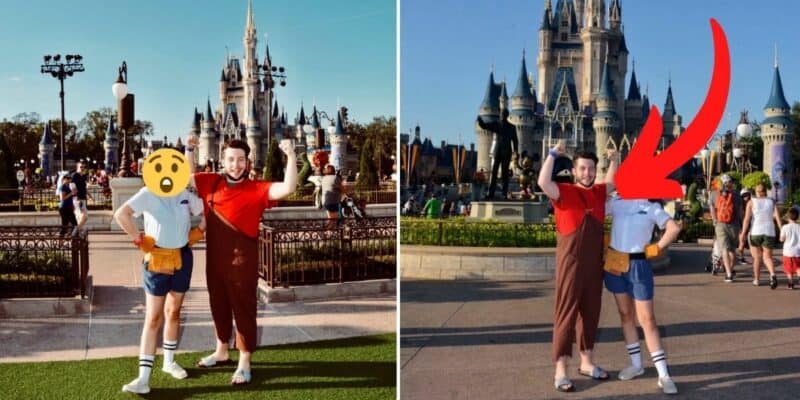 Let’s set the scene: it’s a hot (not unusual) day in Orlando, Florida, the Halloween festivities have once again descended upon Walt Disney World Resort, and I’m dressed as Wreck-It Ralph with Fix-It Felix Jr. by my side. Excited to start stuffing my treat bag with treats, riding rides, and seeing shows, I did not expect my day at the Mickey’s Not-So-Scary Halloween Party of 2017 to end being rolled onto a Disney Resort bus with armfuls of Dasani water, feeling like I’d just been resurrected by the Sanderson Sisters.

I want to preface this story by saying: this is my story, and I cannot attest to anyone else’s experience that may have suffered the same fate that I did back on that fall day at the Magic Kingdom. Let’s unpack, shall we?

A Disney World vacation for anyone is sure to be a momentous occasion. For me and my fiancée, a couple who live in the United Kingdom, a Disney holiday takes months if not years of planning, saving, budgeting, phone calls, more phone calls, deciding on FastPass+ selections (sigh), and cherry-picking the best dining locations. I’m not stating that others don’t do this but when you’re flying 4,000 miles and dropping cash on a holiday, you can’t not do it.

We had done Mickey’s Not-So-Scary before back in 2016 and had a blast. Clad as everyone’s favorite Wilderness Explorer Russell with my fiancée shimmering in the Orlando sun as a sequined Kevin, the Party was memorable not only for the quietness of the Magic Kingdom, or even the bagfuls of treats but for the Disney characters, rare ones too, that pop up all around the lands surrounding Cinderella Castle.

As a huge Tarzan fan (and I mean, Huge with a capital H — I once cried watching Tarzan and Kala glide around the ice rink to Phil Collins’ dulcet tones), meeting Tarzan, Jane, and Turk was a highlight. And then there was Cruella, bright, eccentric, hilarious Cruella, who attempted to steal my trusty hound, Dug, but decided against it due to him having “no spots”. Too right, you can’t have him, he cost $30 from the Emporium.

Then 2017 whirled around, and we were once again headed to Walt Disney World with another set of homemade costumes in our luggage. This year, we were to be Wreck-It Ralph and Fix-It Felix Jr., the dynamic duo from Disney’s animated classic, Wreck-It Ralph (2012). I took on John C. Reilly’s character while my fiancée became Jack McBrayer’s Fix-It Felix Jr.

We’d skipped the Parks that day, not stopping by EPCOT, Disney’s Hollywood Studios, Disney’s Animal Kingdom, or even the Disney water parks or Disney Springs, knowing that we would be immersed in the Magic Kingdom until the very early hours. Little did I know, that my day would end with a bang. There were fireworks sure, bang bang, but like that moment in the movies when you think you’ve reached the climax but it was a red herring all along, I hit the deck in the line for the Disney’s Pop Century Resort bus. Big bang.

Many Disney fans will know that Pop Century is one of the largest and therefore busiest Resorts on Walt Disney World property. Thus, my dramatic end to the Disney Park Great Halloween Party of 2017 was witnessed by a lot of people. Let’s go back a few minutes. We’d already waited for a good chunk of time and reached the final section of the bus line. I was leaning on the railings when something happened. I can’t quite describe what happened. I might describe it as a similar feeling to what I would imagine Flynn Rider felt when Rapunzel knocked him out with a frying pan. With this frying pan feeling radiating through my head, I turned to my fiancée and asked for water. Those were my final words before waking up with a horde of Disney Guests hovering above me.

As I lay with various incarnations of Disney characters surrounding me, I couldn’t help but let out a chuckle when the Cast Member asked if there were any medical personnel present and my fiancée — who let’s not forget is, at this moment in time, dressed as Fix-It Felix Jr. — raised her hand. I’m sure, in all her years of study and training to become a medical professional, helping her fiance on the floor at the Magic Kingdom, dressed as WRECK-IT RALPH (!!) is sure to be the highlight. It was like I could almost hear the sounds of the arcade as she tapped me with her hammer and I spawned back to full health. I jest, but in hindsight, the moment is now one of those fun facts of life stored away.

You would perhaps think my visit to the Not-So-Scary party would have left an Oh-So-Scary taste in my mouth, but it didn’t. Not once while I was heaped on the concrete — and even at Disney World, concrete is just concrete; hard, scratchy, concrete-y — did I feel scared or uncared for. The Disney Cast Member asked if I would like them to call 911, but I felt I would be alright once I’d downed liters of water and basked in the Disney bus air conditioning.

The attentiveness of the Cast Member as well as the way they cleared the bus line so I could board and get out of the heat was truly remarkable. I’ve fainted once in my life, I’ve gotten heatstroke once in my life, I’ve been dressed as Wreck-It Ralph once in my life, and like the stars aligning to free the Titans in Hercules, all three of these events happened at the same time.

This year Walt Disney World replaced Mickey’s Not-So-Scary Halloween Party with the After Hours Boo Bash event and is currently celebrating its 50th anniversary AKA The World’s Most Magical Celebration.

Have you ever had any unfortunate incidents on Disney property? Let us know in the comments down below!