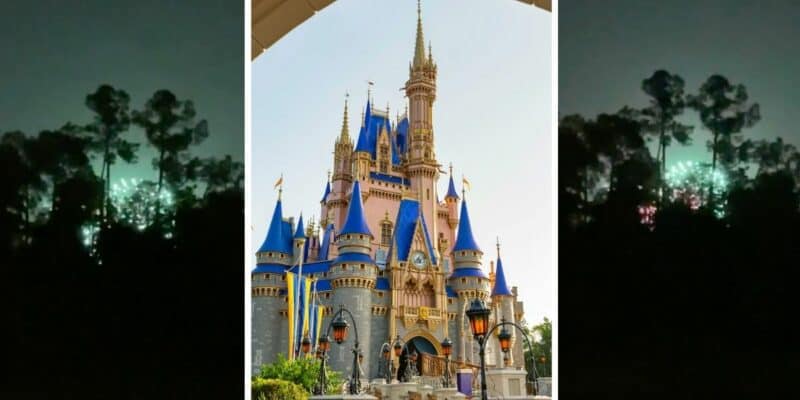 With the launch of Walt Disney World’s 50th anniversary celebration — coined The World’s Most Magical Celebration — on October 1, 2021, the Central Florida Disney Park also debuted a plethora of new entertainment.

Much to the chagrin of Happily Ever After diehards, one of the new firework shows, Disney Enchantment at Cinderella Castle, replaced the fan-favorite nighttime spectacular. However, last night, after Magic Kingdom’s closure, Disney World tested fireworks likely to be for the imminent launch of a new event.

October 1, 2021 will go down in history as one of the most momentous occasions in Disney Parks history. In celebrating the opening of the Walt Disney World Resort in Orlando, Disney brought Guests together to mark this long-standing, and beloved, vacation destination.

With new nighttime spectaculars, Disney Enchantment and Harmonious, and daytime show Disney KiteTails at Disney’s Animal Kingdom, Guests on their Disney vacation at the Florida theme park can experience a multitude of new entertainment.

During the Halloween season, Disney decided not to bring back the fan-favorite Mickey’s Not So Scary Halloween Party and instead debut the Boo Bash After Hours Event — a special ticketed event for Guests to experience some seasonal and “villainous” activities against the backdrop of Magic Kingdom.

This trend is set to continue this Christmas with Disney Very Merriest After Hours replacing Mickey’s Very Merry Christmas Party at one of the world’s most-visited theme parks. This brings us to the fireworks. The After Hours event, which Disney reminds Guests do not need to be ticketholders for a day admission to Magic Kingdom nor do they need to organize a Disney Park Pass reservation, will see the return of Minnie’s Wonderful Christmastime Fireworks, as announced earlier this year. It seems some Resort Guests got a sneak peek of the festive display last night.

In an announcement on their community Facebook page, the company revealed they would be performing firework testing between the hours of 11 p.m. and 12 a.m., although did not specify what fireworks they would be testing at the Disney theme park.

Around Magic Kingdom Park tonight (Oct. 28), some of our neighbors may hear the sound of fireworks a little later than normal, between 11 PM and midnight. Don’ be spooked! We will do our best to keep noise at a minimum, and thank our neighbors and Guests for their understanding.

While it wasn’t confirmed that Disney World would be testing Minnie’s Wonderful Christmastime Fireworks, many Guests speculated that this is what the announcement would be for considering the Halloween theming will soon be replaced with Christmas decor at Disney Parks. The Minnie Mouse fireworks show first debuted in 2019 at Walt Disney World.

Last night, some Guests caught a glimpse of the firework testing (for better and worse).

@DisneyWithBooze shared a short video clip of the fireworks testing to Twitter:

Another tweet from Katie (@suwanneeladykt) described the fireworks as “intense”:

idk what these fireworks are but they’re very intense?????

idk what these fireworks are but they’re very intense?????

@UCFJuggernaut caught a photo of the testing:

Another tweet from Ian S. (@IanSweeney), who was staying at a Resort hotel, explained:

Magic Kingdom testing fireworks after hours for Holiday right now and it’s intense even from the Polynesian. It’s pretty awesome.

Magic Kingdom testing fireworks after hours for Holiday right now and it’s intense even from the Polynesian. It’s pretty awesome.

Although it wasn’t all excitement and Disney magic from Guests experiencing the fireworks testing, as Jessica (@geminijesseve) stated:

@WaltDisneyWorld What in the actual **** is going on right now?!? It sounds like there’s been bombs going off for the last 10 minutes. It’s midnight. There are children sleeping. This is unacceptable. #MagicKingdom #BayLakeTower

Disney Very Merriest After Hours begins November 8 and will be available on selected nights through December 21.

Amid The World’s Most Magical Celebration, Disney also released their new interactive tool, Disney Genie, and 19 October brought a whole new change to the Disney Resort experience. From the ability to pay extra to experience rides like Star Wars: Rise of the Resistance at Disney’s Hollywood Studios, or the brand-new attraction, Remy’s Ratatouille Adventure at EPCOT, Disney Genie+ and the Lightning Lane entrances replaced Disney’s FastPass+ system.

This holiday season, join loved ones and friends at an oh-so-jolly occasion during The World’s Most Magical Celebration. Ticket holders will be admitted to Magic Kingdom park as early as 7:00 PM on the valid date of their ticket, giving them even more time to enjoy park favorites before the event begins—including the new Disney Enchantment nighttime spectacular! These dated tickets do not require an additional day theme park ticket or Disney Park Pass theme park reservation.

Are you visiting the Walt Disney World Resort for Christmas this year? Let us know in the comments below!