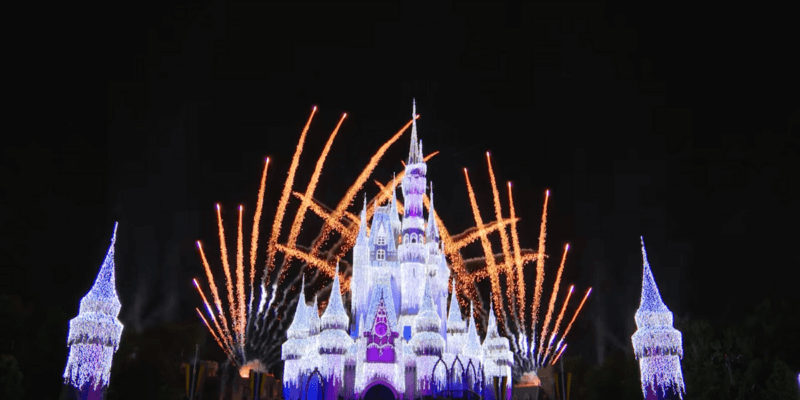 Disney Parks has once again found a way to get Disney fans in the spirit of the season despite all of the present circumstances that leave holiday festivities modified and missing several favorites.

In the latest push of their #DisneyMagicMoments campaign, Disney Parks has released the full video of the would-be holiday nighttime spectacular at the Magic Kingdom in Walt Disney World, Minnie’s Wonderful Christmastime Fireworks.

Disney Parks shared the video on their blog with the following statement:

Tonight, we’re bringing more #DisneyMagicMoments to everyone at home with a special virtual viewing of the dazzling holiday spectacle – “Minnie’s Wonderful Christmastime Fireworks.”

For this pre-recorded viewing, you’ll virtually join host Minnie Mouse as the sky above Cinderella Castle sparkles with breathtaking fireworks to favorite holiday tunes like “Deck the Halls” and “We Wish You a Merry Christmas.”  This yuletide celebration, presented by Disney’s “Godmothered,” a magical holiday comedy starring Isla Fisher and Jillian Bell, streaming on Disney+, will get you in the spirit for the season!

We at Inside the Magic reported Disney Parks’ unfortunate announcement to cancel the fireworks show along with the rest of Mickey’s Very Merry Christmas Party and the Candlelight Processional at EPCOT. While they have been able to bring some magic into the parks with holiday cavalcades and castle overlays, fans have still missed the sights and sounds of a Disney World fireworks spectacular and now we have a chance to view it in our own homes.

But Disney Parks is also providing Disney World Guests with an even closer experience, letting everyone know:

If you’re staying in the magic at a Walt Disney World Resort hotel, tune to Channel 74 for nightly viewings of these fireworks at 6:30, 8:30 and 10:30 p.m. as well as the EPCOT International Festival of Holidays – “Candlelight Processional” – at 5, 7 and 9 p.m.

If you are planning your next trip to the Walt Disney World Resort, our friends at Academy Travel are standing by ready to help you make this next vacation as magical as possible! Click here to learn more and to receive your free, no-obligation quote today!

What is your favorite holiday show or spectacular? Let us know in the comments!