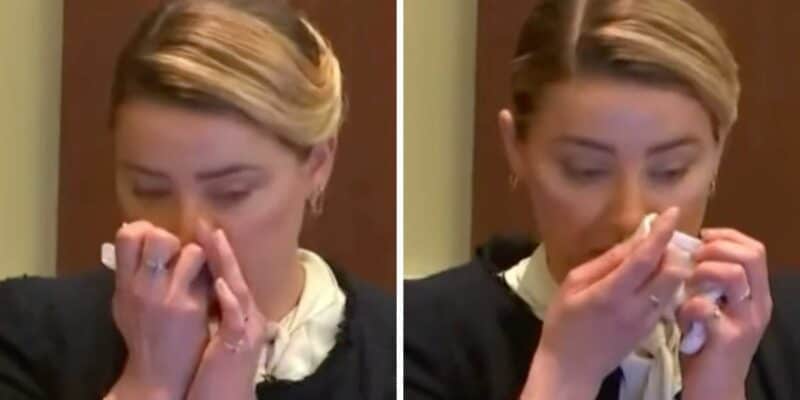 The trial has been going on for weeks now in a Fairfax, Virginia courtroom. After many witnesses took the stand, including Johnny Depp himself, Amber Heard finally took the stand late last week. Social media has been blowing up after Heard took the stand, many calling out some actions and behaviors they noticed as “not authentic”. Others are saying that Heard is giving the “performance of her life” on the stand as many believe her stories are all an act.

In a video posted to TikTok, one user analyzes Ms. Heard’s behavior, suggesting that the actress is using cocaine that she is hiding in a tissue while under testimony and on the stand. In the beginning of the video, you can see Ms. Heard rub her nose with a tissue while simultaneously sniffing. Afterwards, she rubs her nose and continues to sniff.

While this is going on, the TikTok user embedded the definition of a “bump”, which can be defined as “a small quantity of an illicit drug when inhaled in powdered form at one time”.

A few minutes later, Ms. Heard is then seen telling the jury about a specific incident, where she does not seem to have much emotion. This is then the part the TikTok user points out as the “come down”, which is when the user feels uncomfortable or has little to no energy or motivation.

Later on, Ms. Heard can be seen becoming agitated, which the social media user defines as the moment Heard went into the “crash”. This is defined as the “intense exhaustion that people sometimes feel after using drugs”.

The TikTok user then points out that this cycle happened again during Heard’s testimony, indicating she took a second bump and continuously rubbing her nose and experiencing other possible stages of drug use, including the “drip” and “coke jaw”.

You can watch the full video below or by clicking here.

how did they miss this lmao

Though she did not indicate that Ms. Heard was using cocaine in her analysis, she only analyzed Ms. Heard’s first day of testimony whereas the TikTok’s video footage is from a different day of Ms. Heard’s testimony.

Have you been watching the Johnny Depp vs Amber Heard trial? Let us know your thoughts in the comments below.