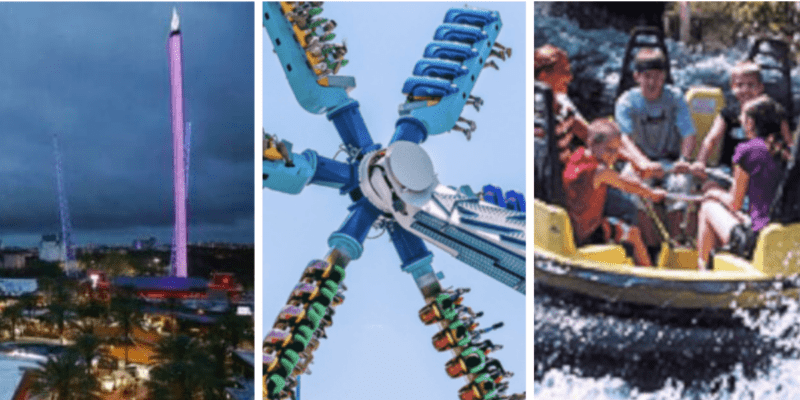 There’s nothing quite like a trip to an amusement park.

The sights, the sounds, the thrills. From riding massive coasters to meeting with your favorite character to enjoying unique and delicious snacks, there’s something for everyone to enjoy when they visit a theme park.

Because of these reasons, when families across the world are considering where to go on vacation, it’s not often that a theme park of some sort doesn’t get brought up as an option.

Whether it be Walt Disney World Resort in Orlando or Disneyland Resort in California or many other amusement parks, including Universal Orlando Resort, Universal Studios Hollywood, Six Flags, Busch Gardens, SeaWorld, Cedar Fair, families are always looking for places that they can have a fun time and make memories that last a lifetime.

However, recent tragedies and accidents have many theme park Guests rethinking those options and possibly staying away for good.

While uneasiness at theme parks has always been a subject for some, the fear was amplified after the tragic news of 14-year-old Tyre Sampson’s passing after falling to his death while riding the Orlando FreeFall at ICON Park.

After the incident, ICON Park demanded that SlingShot Group– the company that operates Orlando FreeFall– cease operations of both the FreeFall and the Orlando SlingShot. Protests have been held outside the attraction pushing for it to be taken down and the family just recently filed a lawsuit.

The lawsuit alleges negligence on the part of several defendants. It also states that SlingShot Group manipulated safety sensors on a couple of the ride’s harnesses and did not post the attraction’s weight or height limits at its entrance. An operating manual from the Orlando FreeFall states that the maximum rider weight for the attraction was just over 286 pounds. Sampson weighed over 350 pounds.

They say the ride attendants failed to notify Tyre of any such limitations or check his restraints properly. In addition, Sampson’s parents say the ride was unsafe due to manufacturing and design defects and should have included seatbelts.

“The defendants in Tyre’s case showed negligence in a multitude of ways. One of the most glaring examples was failing to provide a $22 seatbelt on a ride that cost several million dollars to construct,” Attorney Ben Crump said a statement. “They didn’t, and their poor decisions resulted in deadly consequences for a promising young man and lifelong pain for his family.”

“I’m sorry. With all these circumstances, all these incidents that occurred, it’s criminal. Somebody killed Mr. Tyre Sampson,” Martin said.

At this time, no criminal charges have been brought forth but a police investigation is ongoing.

The tragedy that unfolded at ICON Park wasn’t the first to happen in the last several months.

Adventureland, located in Altoona, Iowa, also saw tragedy strike last year when 11-year-old Michael Jaramillo died on the Raging River ride. The attraction had been closed for several months as Adventureland replaced the ride’s control board. On July 2, the ride passed a state inspection and it reopened to the public on July 3.

On that day, five members of the Jaramillo family boarded the ride. Their raft capsized and they were left trapped in the water. Michael was pronounced dead by drowning in the early hours of July 4 and two more family members were transported to the hospital suffering injuries.

Uncovered audio recordings regarding the maintenance of several attractions paint an uneasy picture. Michael McCollum, a former ride operator at the theme park, said that maintenance workers were using “duct tape and bubble gum,” so to speak, to fix rides.

“They have to fix things with what they got and that’s unfortunate,” McCollum said. “There are times where things can’t be fixed and they do their best to get them back up and running. Let’s take for instance the Tea Cups, or rides like that. They’re sinking underneath. So they’re gonna get in there and they’re going to shove little 2×4 pieces in there just to kind of prop it up instead of pulling it apart and re-leveling it as it should be. You’re using duct tape and bubble gum basically to keep those rides afloat, and it’s more than them.”

According to the Deis Moines Register, a later inspection would find that there were 17 safety violations, including using parts not approved by the manufacturer, using Flex Seal instead of patches to fix leaks in the rafts, and not testing the rafts following repairs. The ride will remain closed for the 2022 season at Adventureland with its future possibly looking bleak.

Thousands Of Theme Park Injuries Occur Each Year, But These Are Still Very Rare

While these two tragic deaths happened just a matter of months apart from one another, theme park deaths are very rare. Only a handful of tragic instances have happened over the last decade.

However, it should be noted that The US Consumer Product Safety Commission reports roughly 30,000 amusement park-related injuries each year.

For example, the latest incident report from Florida theme parks showed several injuries in the first quarter of this year. Florida theme parks are required by state law to disclose their most serious injuries among Guests every quarter as a deal that was made to avoid state inspections and the latest incident report– detailing accidents that occurred from January to March– has been revealed.

At Walt Disney World Resort, a 63-year-old Disney Park Guest fell attempting to climb off her horse on Prince Charming’s Regal Carrousel at Magic Kingdom resulting in a fractured hip. In addition to the hip fracture, passengers on Avatar Flight of Passage (Disney’s Animal Kingdom) and Rock ‘n’ Roller Coaster Starring Aerosmith (Disney’s Hollywood Studios) reported suffering seizures. On EPCOT’s Soarin Around The World, a 73-year-old woman appeared to have a stroke and an 82-year-old woman experienced chest pain after experiencing the attraction.

A 72-year-old woman passed out while on the Tomorrowland Transit Authority People Mover at Magic Kingdom. Lastly, a 55-year-old man appeared to have a stroke after exiting Remy’s Ratatouille Adventure at EPCOT.

At Universal Orlando Resort, a 77-year-old with hip pain and a 66-year-old with motion sickness were hospitalized after riding Harry Potter and the Forbidden Journey. The third reported injury from Universal was categorized as abdominal pain and involved a 21-year-old woman with a pre-existing condition who rode Kang & Kodos’ Twirl ‘n’ Hurl in Springfield at Universal Studios Florida.

Finally, over at SeaWorld Orlando, a 12-year-old boy was hospitalized after riding the all-new coaster Ice Breaker. He suffered a leg injury, but the extent of the injury was not disclosed.

Though 30,000 injuries may seem like a lot on the surface, an industry group representing theme and water parks noted in the publication Far and Wide that the chance of being injured on a ride at a permanent U.S. amusement park is 1-in-16-million, compared to a 1-in-700,000 chance of being struck by lightning.

According to a report from Queen City News (WJZY), many theme park goers found themselves in a bit of a frightening situation at Carowinds in Charlotte recently.

While riding the attraction the Electro-Spin, Guests were left stalled in midair. Many were hanging facing the ground with nothing but the ride restraint holding them in their seat.

“People were terrified,” Alexcia Powell told WJZY. “It was quite horrifying to watch because that could have been anyone on there. “It kind of deterred us from wanting to get on any other rides for that exact reason,” Powell said. “Like what if we get on and we get stuck upside down or midway through a loop? You never know.”

Both Powell and Gilliard said they would both revisit Carowinds in the future, but only to enjoy the water park.

Following the death of Tyre Sampson on the Orlando FreeFall, some Universal fans also shared concerns about the seat restraint on a beloved attraction, Doctor Doom’s FearFall, at Universal’s Islands of Adventure. The attraction took away seatbelts that once clicked in between the legs on the drop tower. While it may seem as if the seatbelt attaching to the harness would provide an added layer of safety, the attraction has several fail-safety measures in place to ensure that the restraint is attached and locked just as it should be. Many Guests quickly came to the defense of Universal, making sure others knew there was nothing for them to worry about.

Guests at a Six Flags Park also recently experienced a malfunction just this past week. While riding SkyScreamer, the Guests were stuck dangling hundreds of feet in the air for more than an hour before they were brought down.

Despite Uneasiness, Theme Parks & Legislators Are Focused On Safety

There are many examples of rides malfunctioning and these videos and photos shared on social media have caused once happy theme-park goers to rethink their decisions. Still, it’s important to remember that theme park ride attendants are highly-trained to handle these situations and to evacuate Guests in a safe manner when they do occur.

In Tennessee, Dollywood closed its drop tower attraction, Drop Line, out of an abundance of caution because the ride was made by the same manufacturer that constructed Orlando FreeFall. At this time, the attraction remains closed.

In addition, Busch Gardens Tampa Bay inspected its drop tower attraction after the tragedy to ensure that it was completely safe.

While many theme parks have continued to reassure that their Guests are safe, some Ride Safety Experts say that there do need to be changes in how the amusement parks are regulated.

“This was taped with video, and, you know, it’s really resonated with the public saying, OK, stop, something’s got to change. We have standards and practices and whatnot that could have addressed this in a meaningful way to prevent it. Why the inconsistencies? And I think that’s why we’re at this point where we’re asking about why we don’t have federal oversight,” Ride Safety Expert Brian Avery said following the ICON Park tragedy.

For example, Florida House of Representative member Geraldine Thompson, who represents parts of Orlando, said rides should be required by law to display any height or weight restriction, as well as other pertinent information.

Ultimately, theme parks are some of the most regulated places in the country with strict protocols. While there are still potential legislative actions that will take place due to recent tragedies, Guests visiting should still rest assured that their ride operators are highly-trained and able to ensure both a fun and safe experience.

Do you feel safe when visiting a theme park? Let us know in the comments.