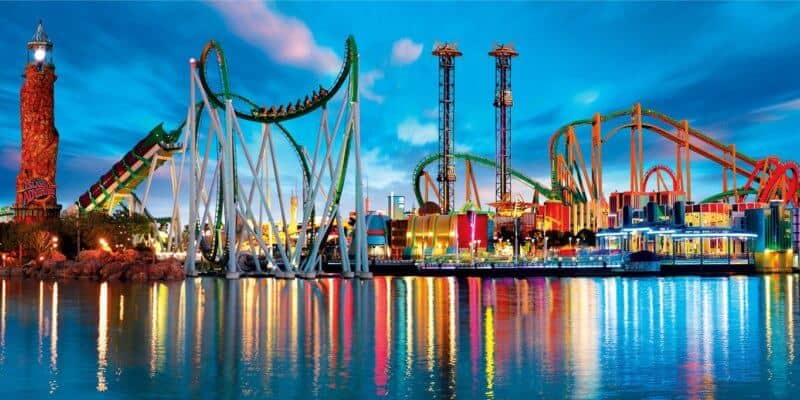 Each Universal Orlando attraction undergoes massive and intense safety inspections and they are combined with fail-safe measures to ensure that every single ride is safe.

However, the recent tragedy at ICON Park in Orlando, where 14-year-old Tyre Sampson was released from his seat while riding the world’s tallest freestanding drop tower, the Orlando Free Fall, has many theme park fans rethinking attractions and wondering about the safety of theme parks across America.

Recently, concerns were brought up about the safety of Doctor Doom’s Fearfall at Universal’s Islands of Adventure. The ride is a tower attraction that sends Guests 185 feet in the air and Twitter user Clint Gamache (@iamcg83) recently shared photos that the attraction does not have a seatbelt restraint that connects the over-the-shoulder restraint to the seat. This had many fans concerned.

For those that are debating with me that Doom still has seatbelts. I present exhibit A:

For those that are debating with me that Doom still has seatbelts. I present exhibit A: pic.twitter.com/cwyeOk2kYU

One Universal Orlando fan said it was better to have the safety restraint buckle than to not have it.

They should have them, better safety precaution to have them click on the overhead restraints.

They shuld have them, better safety precaution to have them click on the overhead restraints

The attraction used to have seatbelts that locked in the shoulder restraint, but they were removed during a refurbishment in 2018. One Guest said this was a “poor safety decision.”

Definitely should have locking belt attaching the harness between the legs, this is a poor safety decision.

While it may seem as if the seatbelt attaching to the harness would provide an added layer of safety, the attraction has several fail-safety measures in place to ensure that the restraint is attached and locked just as it should be. Many Guests quickly came to the defense of Universal, making sure others knew there was nothing for them to worry about.

Many Guests pointed out that the reason these seat buckles have been removed is that if you can pop open the seat buckle on a high-intensity ride, it’s not a true restraint. Instead, technology has advanced to allow for fail-safes to be put into place to ensure that harnesses remain in place.

In the case of ICON Park, one Guest noted that different dimensions of physics were in play, as well.

They really don’t, though. If the restraint is closed properly, nobody’s going to fall out, and all G forces positive or negative are sent straight up and down. ICON drop tower added a tilt function, and that brings a whole new dimension of physics into play.

They really don’t, though. If the restraint is closed properly, nobody’s going to fall out, and all G forces positive or negative are sent straight up and down. ICON drop tower added a tilt function, and that brings a whole new dimension of physics into play.

Faster Than the Space Shuttle.

Doctor Doom is testing his latest invention, a machine that sucks fear out of people. His plan? Use the fear he collects as a weapon against the Fantastic Four. His henchmen will strap you into a seat, blast you into the sky and then—without a second to catch your breath—hurl you back down with a face-melting force stronger than gravity itself.

Universal Orlando has designed world-class attractions that are expertly operated by highly-trained Team Members and have many safety features in place to ensure that every rider is safe every single time.

Do you enjoy Doctor Doom’s Fearfall at Universal Orlando? Let us know in the comments.