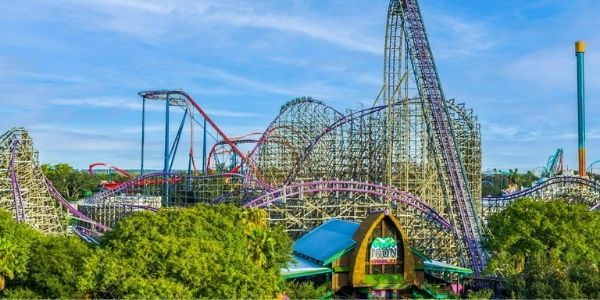 At Busch Gardens, there are a ton of coasters that Guests can choose from. Tigris is a forward and backward thrill experience, Cheetah Hunt is a smooth animalistic ride, Cobra’s Curse spins Guests around, and more. The most recent addition to Busch, however, has been the newly refurbished Iron Gwazi. The coaster was built in 1999 as just a wooden track, but closed down to be refurbished and redone, into a hybrid wooden/steel coaster. The coaster features a 91-degree drop and an over 200-foot drop. Iron Gwazi’s top speed hits at 71 miles per hour, making it the faster roller coaster in all of Florida.

We recently saw Neil Patrick Harris ride the attraction, and as of March 11, 2022, it will be officially open to the public. At the moment, the attraction is in Passholder previews and a soft opening. Recently it seems that there was an incident on the coaster. A Guest reportedly stuck his hand while riding and now, two beams have been removed from the coaster. At 71 miles per hour, a hit could be extremely severe.

Reporter Marcus Leshock reached out to Busch Gardens Tampa to ask about the situation.

Two beams have been removed from the #IronGwazi roller coaster at @BuschGardens after a guest reported he had struck his hand while riding. Statement from the park…

Two beams have been removed from the #IronGwazi roller coaster at @BuschGardens after a guest reported he had struck his hand while riding. Statement from the park… pic.twitter.com/jRp0MOUaBV

Thank you for checking on this. We did recently have a guest report that he had struck his hand on a beam while riding the Iron Gwazi roller coaster. That guest declined any medical treatment at the park after the ride was over.

Out of an abundance of caution, the morning after this situation, crews removed two beams from the area where the guest reported this situation occurred. We took the precautionary step to remove them as part of our commitment to the health and safety of our guests.

As we can see, it seems that the hit was not severe due to the Guest declining medical treatment from the Busch Gardens team, but the theme park still proceeded to exercise caution on the attraction, removing two of the beams that could cause injury again.

At SeaWorld Orlando, Ice Breaker, a new coaster, recently debuted and within days had its height restriction changed due to a child’s legs not being properly secured within the ride vehicle.

More on Iron Gwazi at Busch Gardens Tampa below:

Just in time for spring break, Iron Gwazi, North America’s tallest and the fastest and steepest hybrid coaster in the world, will officially open on March 11. Iron Gwazi takes thrills to new heights, plunging riders from a 206 foot-tall peak into a 91-degree drop and reaching top speeds of 76 miles per hour. Riders on Iron Gwazi will experience a dozen airtime moments, including three inversions, as they sink their teeth into crocodile-inspired thrills.

Do you plan on riding Iron Gwazi? Let us know in the comments below!