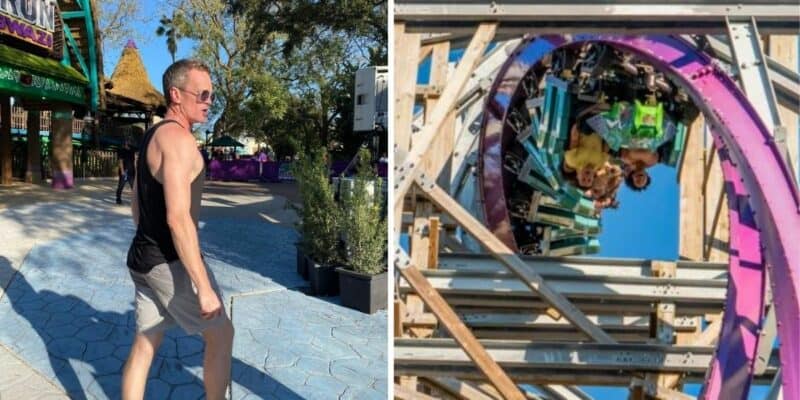 Neil Patrick Harris is no newbie when it comes to theme parks. Neil Patrick Harris is a well-known Disney fan, hosting the Candlelight Processional at EPCOT during the holiday season. He even has a margarita named after him in La Cava Del Tequila in the Mexico pavilion. He and his husband David Burtka take their 10-year-old twins, Harper Grace and Gideon Scott, to Disney World each year, and plan to do it until the two “can’t stand” Harris any longer.

From this, we can clearly see that Harris is a big fan of Orlando and theme parks — and Disney is not the only Park he ventures off to. Of course, Universal Orlando Resort is another competitor just minutes away from Walt Disney World Resort, and SeaWorld is close by as well, but just around an hour away (approximately) sits Busch Gardens Tampa, themed with a safari feel, much like Disney’s Animal Kingdom, and littered with coasters.

Now, it seems that Neil Patrick Harris stumbled upon one of the most terrifying coasters that Florida has to offer. At Busch Gardens, there are a ton of coasters that Guests can choose from Tigris is a forward and backward thrill-experience, Cheetah Hunt is a smooth animalistic ride, Cobra’s Curse spins Guests around, and more. The most recent addition to Busch, however, has been the newly refurbished Iron Gwazi. The coaster was built in 1999 as just a wooden track, but closed down to be refurbished and redone, into a hybrid wooden/steel coaster. The coaster features a 91-degree drop and an over 200-foot drop. Iron Gwazi’s top speed hits at 71 miles per hour, making it the faster roller coaster in all of Florida.

FLTrekkerChick (@FlTrekkerChick) took to Twitter to share the How I Met Your Mother star walking off the beast!

Is that… NEIL PATRICK HARRIS just getting of #irongwazi ??? Why yes folks.. it IS!! 😍😍😍@BuschGardens @SeaWorld pic.twitter.com/c10gREaQkd

Just when you thought Harris only goes to Disney… The ride is currently in previews with Iron Gwazi opening on March 11.

More on Iron Gwazi at Busch Gardens Tampa below:

Just in time for spring break, Iron Gwazi, North America’s tallest and the fastest and steepest hybrid coaster in the world, will officially open on March 11. Iron Gwazi takes thrills to new heights, plunging riders from a 206 foot-tall peak into a 91-degree drop and reaching top speeds of 76 miles per hour. Riders on Iron Gwazi will experience a dozen airtime moments, including three inversions, as they sink their teeth into crocodile-inspired thrills.

What do you think of this new coaster? Have you ventured outside of the Disney bubble?